Share All sharing options for: Duck U: Crunchology 101 - Lil' Team That Could

Good day, class! It's so great to see you all back here for the second part of my Crunchology 101 lecture. If you remember, last time we met I discussed the history of hockey in Syracuse and how the Crunch came to be. As I said, the Crunch has been around for eighteen years now.

How have they done it?

Simple, my dear pupils: the team has managed to balance a two-pronged approach to achieving longevity and popularity. The first prong involves simply keeping themselves in the news as much as they can. The second has to do with the actual business of the American Hockey League.

(I, of course, mean that in the most loving and tender way possible)

If there is one thing the Crunch is good at, it's grabbing attention. If you'll humor me for a moment, go do an image search for "Syracuse Crunch." Any search engine will do. To cut down on various Syracuse University related pictures, I suggest including quotes. I'll give you a few minutes to conduct the search and look through what you find.

Quite the collection of images, isn't it? Let's run down a few of the things you're seeing:

1. Various mascots: As the Crunch as gone through the last 18 years, the name has always stayed the same. The mascots and colors, however, have changed several times. Every time this happened, of course, there was press to cover it. Releases were made. Pictures were distributed. Conversations were had. News was made! The buzz that was created when the Crunch changed from superhero-like Crunchman to an Ice Gorilla named Al, for instance, I'm told was great. The Crunch have also, like many AHL clubs, changed their colors several times, usually to go with their parent club. See exhibits A-C.

Exhibit A: The original Crunchman Logo

Exhibit B: The logo during the CBJ era

2. Celebrities (or, in some cases, "celebrities"): As you look through the pictures, I'm sure you have many questions. Yes, that really is J-Wow from Jersey Shore laughing as a bare chested man dances with his arms over his head. I'd put the image up on the projector here like the others, but I've been told the source of the image gets rather testy when people like myself (read: me) borrow the things they put on the Internet. But as long as you've done your searching as I instructed (I see you there in the back row!), you will find it. You'll also find a picture of Christine Aguilera. Why? Because after she publicly flubbed the national anthem at the Super Bowl, the Crunch made national headlines by inviting her to a game to try again. They did the same when Britney Spears allegedly went crazy and shaved off all her hair. They invited her to Syracuse to chill out, relax, and see a game. They also gave free tickets to any women who showed up to a game with their hair shaved. Not kidding. The Crunch has no shame when it comes to promotions.

3. Disregarding the status quo: When the organization was told a hockey team in Syracuse wouldn't last, they laughed and stuck one there anyway. When the Crunch was told they didn't deserve building improvements and upgrades, they rallied the fans against the Onondaga County Legislators and forced the issue. When the AHL declared itself not really interested in putting the time in for an outdoor game, the Crunch did it all on its own (exhibit D).

Exhibit D: Arial view of the Mirabito Outdoor Classic, where the Crunch set the AHL All-time Attendance record of 21,508. 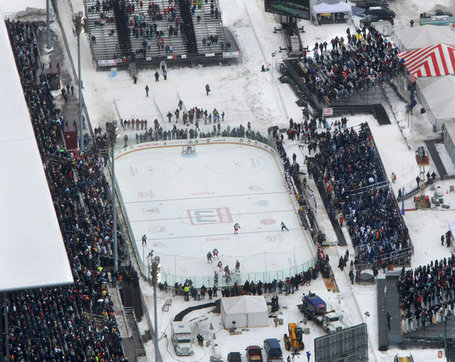 The Crunch very seldom does anything small, quiet, or regular. If they can push the envelope, if they can get people to care, if they can raise passion in their fan base, then they're gonna do it, no question.

Of course, no AHL franchise is going to last very long if they can't develop some kind of reputation for providing a quality place for prospects. If you don't have the fan support, if your front office doesn't know its head from its other body parts, if you can't provide enough for the players to do, then you probably won't last very long in the AHL. Seeing as the Crunch as been around for 18 years, there are quite a few players out there who are easily recognizable and who were raised on the old farm:

--Jody Shelley played for the team for two seasons, 2000-01 and 2001-02. During the 00-01 campaign Shelley set the franchise record for most penalty minutes in a single season, topping off at 357 in 69 games played. This probably isn't that surprising, given his current reputation.

--Mark Hartigan was with the Crunch for parts of four seasons, from 2003 to 2007, when he was traded to the Ducks with Joe Motzko in exchange for Curtis Glencross and Zenon Konopka. All four of these names should be easily recognizable. Hartigan played one game during the Ducks' playoff run in 2007. Motzko played in three games during the 2007 playoffs for the Ducks. Glencross is still out there in NHL land. Konopka is probably the one player Crunch fans are most proud of. He captained the Crunch in 2007-08, the last time Syracuse made the playoffs. He's now a well-known enforcer and face off specialist.

--Another Duck-Crunch connection can be found in Francois Beauchemin. Beauchemin played for the Crunch in 04-05 as part of the Columbus Blue Jackets franchise.

--Joakim Lindstrom is in Europe now, but NHL fans might remember him as a pretty regular face with the Coyotes during the 2008-09 season. He played in 44 games that year with them.

--Not so surprisingly, Derick Brassard was quite the fan favorite when he was down with the Crunch. He now has a pretty permanent place on Columbus' roster, setting a career-high pace for himself in 2010-11 with 17 goals and 30 assists scored in 74 games. Derek Dorsett is similar prospect who got his feet wet in Syracuse and is now a pretty permanent face in the NHL. Andrew Murray was in Syracuse for the better part of three seasons before landing himself a CBJ roster spot, as was prospect Marc Methot.

--Aaron Rome is another Crunch alum who has found success at the NHL level. During his seasons with Syracuse, he was an anchor on our blue line, no question. We always felt so much better when he was out there with his defensive partner Dan Smith. Now he's a regular with Vancouver.

--Mark Rycroft is someone that some older NHL fans might remember from his time with St. Louis during 2003-04 and 2005-06 seasons, and his time with Colorado during the 2006-07 season. Rycroft ended his career in Syracuse, finishing out his final season in 2007-08 as an integral part of the Crunch's leadership team.

--Gilbert Brule has spent the better part of the last three years with the Oilers. Before that, he did time in the CBJ system. Towards the end of his stay with that organization, he was demoted to Syracuse despite the large salary hit the Jackets took to do so—one of the few shining moments in that partnership—and helped the Crunch to their playoff run.

I know there's more out there, but these are the names that stick out the most in my mind. Many of these names come from the 2007-08 season. I'll admit to being a bit biased about that year. However, numbers don't lie: the sheer success the Crunch had that year has clearly bred into the pedigree of the NHL'ers listed here.

And thus our Crunchology 101 class is brought to an end. Thank you for your rapt attention! I hope you are a bit more enlightened than you were when I first started lecturing. Being in this kind of partnership is special, and it really works so much better when both sides understand each other.