For Chris, there is no bigger rival than the Red Wings... but the Kings and Sharks can go to Hell too.

Welcome to Anaheim Calling's Hate Week! We couldn't come to a general consensus about which team we hate the most for participation in this NHL blogs discussion. Instead, all this week, the AC writers will be taking cheap shots at the top three teams that make them want to turn into the Hulk (Mark Ruffalo version) and break things. Before you get your jeggings in a knot, this is meant to be satirical. If you need the definition of that word, we'll be happy to provide it.

Kicking off 'Hate Week' is the Ragin' Non-Cajun, Chris!

When I signed on here at the beginning of last season, my hook was discussing the Ducks' biggest rivalries. To me, the most important elements to a real rivalry are frequency of meaningful games, the most meaningful being playoff games, and competitive balance in said meaningful games. Significant games create moments that stick with you; some that brew and fester in pain and others that inspire pure unadulterated joy.

Proximity enters into the equation to some extent too, but only secondarily. Based on those criteria the teams I hate the most are pretty well defined as Detroit and everyone else, but topping the list of "everyone else" are Los Angeles and San Jose.

When talking about moments that last a lifetime, no team even comes close to matching the Red Wings. Whenever you discuss a key moment in Ducks history, the Red Wings seem to be there. Going all the way back to the first game ever in Mighty Ducks history, a 7-2 loss to Detroit, the Red Wings have tormented the Ducks. Then of course the Ducks were swept out of their first two playoff appearances by Detroit in 1997 and 1999.

Even though the Ducks took Detroit to overtime in three of the four games in that '97 series, the peak of the Kariya/Selanne era, Detroit just seemed untouchable. That's why J.S. Giguerre's 63 save triple overtime victory in game one of the first round in 2003 was probably the greatest moment of my life at the time (I was 16) and sweeping them six days later was unfathomable, and probably the reason that I own a Steve Rucchin jersey to this day.

Beating them was, and still is, a true achievement. Although the Ducks have had very little success against the Wings in the regular season (19-41-5 with 7 ties all time, for a .263 win percentage) they've been significantly better when it really counts, winning 2 of 5 playoff series (11-14 on aggregate games, win percentage .440). In 11 of the 18 seasons that the NHL has had a franchise in Anaheim, the Western Conference Champion has either been Detroit or the team that has beaten Detroit, including a stretch from 2002-2009 where the Ducks were the only team to do it twice.

I can't speak for all Ducks fans, but to me whichever team won the 2007 Western Conference final was going to be the Stanley Cup Champion, there was no doubt. So to me, the goal that clinched the Cup for the Ducks wasn't a cheesy own goal off the skate of Chris Phillips, but Teemu Selanne's OT game winner in Game 5 that crushed the spirit of Detroit.

I still have nightmares about Game 7 in 2009. The 5-on-3 in the first period where the Ducks produced nothing whatsoever; the faceoff (also in the first period, I think) where the second Red Wing to come in to take the draw conveniently got a warning rather than a delay of game penalty; and of course, the heart braking Dan Cleary goal that ended what could have been a miracle comeback with three minutes left.

From a neutral perspective, I would probably say that that '09 series against Detroit was the best playoff series the Ducks have ever been a part of, but from a fan's point of view it was the second most painful, only behind the '03 Cup Final. The '09 team was an echo of 2007, without Sammy Pahlsson, Travis Moen, Chris Kunitz, Andy McDonald and Jiggy backing up, they weren't the same, but they had a chance to prove that they were a great team with a great core, able to appear in three out of four Conference Finals but they were stopped by a red brick wall. Despite Corey Perry's Hart Trophy and home ice in the 2011 playoffs, the Ducks haven't been back to the level of that '09 team since and I don't see them getting much closer any time soon.

As I've grown as a hockey fan (rather than just a Ducks fan) I've come to realize that I have to respect the Red Wings for being ... well... The Red Wings: the closest thing to a dynasty that we've seen in the past 20 years. Pavel Datsyuk is unreal, Henrik Zetterberg is amazing and Nicklas Lidstrom is probably one of the most perfect human beings ever to exist. I can say these things, but it doesn't mean I like to.

Possibly the best thing about hating Detroit is that it isn't all one way anymore. Back in the late nineties when the Wings were sweeping the Ducks and going to war with Colorado, we were but the buzzing of flies to them, if I may paraphrase Ghostbusters 2. But between '03, '07 and possibly '09 (as Daniel argued here), the Ducks have put a dent in the Detroit fan psyche.

When Jen interviewed Rob Pizzo of The Score early last season, and brought up 2003, he claimed to have blocked it from his memory and/or wiped it from the history books. I would suggest that being one of the teams that Red Wings fans have to block from their memories is a noteworthy feat, considering the lack of any semblance of adversity the team has faced in the past two decades. Not to mention the fact that this whole "Hate Week" theme came about because the boys over at Winging it in Motown chose us as their currently most hated rivals. This fills me with nothing but pride and joy.

Thank you, Detroit! We hate you too.

The Kings are an interesting case, when talking about rivalry with the Ducks.

This is a new development.

I wrote this post about the rivalry in November. Most of it still holds up to some extent, although a certain unspeakable event from this past June changes it a little bit. I've always considered the Ducks/Kings rivalry to be really boring. Every conversation was the same:

Kings Fan: "At least we're not named after a stupid kids' movie!"

... And scene. At least we had the higher ground. Now it's more like this:

Less clear cut who wins, and a little more in depth, but still boring as hell. I will admit that the Kings' romp through the playoffs this past spring has boosted them up to equal standing with San Jose, or slightly above. It's hard to tell, but that's all out of jealousy and fear for what may be to come if the Kings decide they can play that well for any extended period of time.

The Sharks rivalry is based more on actual game play. San Jose seems to always have the Ducks' number in the regular season (except last year when we were complete shit and still clobbered them in the season series) but, an eighth seed knocking the presidents' trophy winner out of the first round makes up for all of that.

On a super-trivial side note, I am also annoyed by the fact that everyone still calls HP Pavillion "The Shark Tank" even in an official capacity, while nobody still uses "The Pond" for Honda Center, but I digress.

The Ducks' fan argument against San Jose is the same as everyone else's, namely that they're chokers, but it's somewhat validated by the fact that the Ducks had an active hand in that process. I would also contend that the choker label doesn't fully apply to the Sharks anymore since their back to back conference final appearances in which they lost to the prohibitive favorite each time.

Also those two seasons of relative playoff success feed my distaste for the Sharks because they "forced" me into the mental gymnastics of quietly hoping -but not rooting, definitely NOT rooting - for Detroit to win. The logic I used was as follows:

2. If they do it then the Ducks lose the upper hand of holding the Cup over them and calling them chokers (more boring arguments like the one above with the Kings Fan).

3. The Sharks are playing Detroit.

4. No matter what happens it will at least take a century for the Ducks to have any claim to bragging rights over Detroit, and still they'll be original six and have Gordie Howe.

5. If Detroit beats San Jose they'll still be chokers and we'll still have at least one more Stanley Cup than them.

6. Oh Shit! That means I have to hope Detroit wins.

/Cries self to sleep.

The history isn't nearly as deep or as dark with the Sharks, as it is with the Wings, but at least there's something. Apart from the game where Teemu fought Brad Richardson at the end of the 2011 season, the only moments I can evoke from Ducks/Kings games are Teemu's 1,000th point and Bobby Smyth Ryan's first hat trick, both of which would have been equally as memorable had they occurred against anyone else.

In contrast, consider Bobby's overtime game winning penalty shot against Detroit from March of 2011. An overtime penalty shot is rare enough that I'm sure it would be remembered fondly if it were against Tampa Bay, for instance, but I don't believe that I would have been running up and down the aisles high fiving and hugging strangers, as I did, if that were the case.

The Kings and Sharks' rivalries with the Ducks are built on geography, which is devalued by the current divisional/conference alignment of the NHL. Sure, I get a feeling of spite when I see a Kings bumper sticker or a Sharks hat, but Detroit has that beat as well. In Southern California, I'm almost as likely to see a winged wheel as I am to see one of the Kings' many crappy logos, and anyone who has been to The Pond knows that there are just as many, if not more Wings fans when Detroit comes to town as there are Kings or Sharks fans on their nights in Anaheim.

Nashville gets an honorable mention for potential, but I wrote a whole post about it back in November and I've rambled on for too long already.

To wrap things up here's a picture of my white board at work: 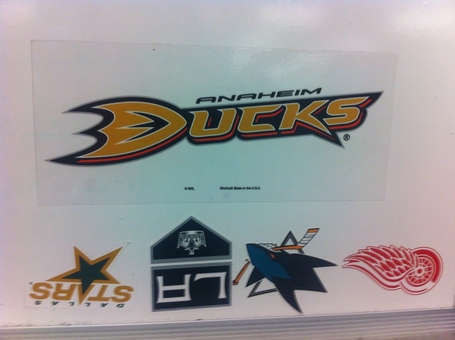 Congratulations and thank you, if you've made it this far.