Share All sharing options for: Conclusion of AC's Hate Week: Shut Up, Jackass

Growing up, my mom wouldn't let my brothers and I use the word 'hate'. She said that 'hate' is such a strong word it should be used sparingly. I still follow that rule to this day, even when I'm writing about sports. It's easy to say "I hate that guy", but do you, really? Does the sight of your hatred throw you into a blind rage? For the things below, yes. Yes, they do.

Before the 2010-2011 playoffs, I was only acutely aware of Jordin Tootoo. I knew he played in the NHL, he changed his jersey number to '22' after a couple years in the league, and thanks to now former teammate Mike Fisher's wife, he dated Kelly Pickler from American Idol. That was about it.

I became all to aware of Tootoo during the playoffs. How? Because he was always laying, writhing on the ice and one of the Ducks would be sitting in the penalty box.

I've seen the Ducks fall apart before. Yet, I've never seen them become as unraveled as they did because of one player. You know it's bad when Bob Murray comes out of Castle Greyskull to make a comment on the matter.

After a regular season game in November against Nashville, Ryan Getzlaf was pissed-off. Let me preface this by saying Getzy is your prototypical sports cliche user in interviews; the fact that he holds back on all of his usual cliches is really saying something:

"We keep talking about all this stuff and changing rules and head shots and all that kind of stuff," Getzlaf said. "That's not the stuff that's hurting our game. It's the lack of respect on the ice. I'm tired of watching Jordin Tootoo out there, a guy who runs around and hits and does everything else but the first little slash, he's laying on the ice and he's out the next shift.

I'll give the captain credit, I don't think I've ever seen him flop. Corey Perry or Bobby Ryan? Absofrigginlutely. But that's beside the point.

Jordin Tootoo is a pest. I'll give it to him; he does a great job at it. Here's the thing though, he is Steve Ott with even less talent. He has to resort to flopping to be kept in the lineup. That is an integrity issue over a hockey issue. It's not okay for Perry and Ryan to flop because they're far more talented than Tootoo. It's the way they respond to what comes next that differentiates them from Tootoo. They will flop, get right up, and if necessary, fight. Tootoo doesn't fight. He sits on the bench for one shift like the little coward he is.

Seeing as Detroit has caught most of our ire during Hate Week, it is all too appropriate that Tootoo signed with them in the off-season.

I'm guilty of assuming things about other fan bases. For example, Detroit fans would punch their own mothers in the face if she said anything about bad about, God help her, Pavel Datsyuk. Or Los Angeles fans just found out they had a hockey team. I'll throw in a third one to round it out, Nashville fans put on their Sunday best overalls to go to the rink.

I've been a Ducks fan since 1996. I think I've heard almost everything on why other teams' fans don't like. It gets to be really, really boring by the 32947923748th time your told the same things over and over.

Everyone's favorite 'insult' when come to the Ducks: "At least my team didn't come from a Disney movie". Yes, geniuses, our team did start because of a children's movie. If you want to get even more specific, based on the plot of the movie, our team started because of a DUI. Gordon Bombay got a DUI and had to coach a kids hockey team as community service.

Daniel mentioned it in his post, other fans assume that the Ducks are dirty. Every hockey team is dirty, jackass. It's called competitive advantage. As I mentioned above, Tootoo used his apparently Oscar worthy acting skills to gain competitive advantage over the Ducks. It worked didn't it? Stop being bitter because it worked so well for us that we won a Stanley Cup.

P.S. No one wants or has a team full of Lady Byng winners; they would be 0-82 every season.

A large majority of non-Ducks fans 'tease' us about the apathy of our fanbase. Dude, we'll admit that they are. Like I said earlier, LA just found out they had a hockey team; same thing happened to us in 2007. The season following the Cup, Honda Center was full of bandwagoners who like to watch winners. They'd still be there if the team wasn't so crappy. Those on the bandwagon have jumped off. Not a big deal to those of us that are with the team no matter what because bandwagoners are really annoying. They can't pronounce anyone's name. For example: "SUH-be-SA" for Luca Sbisa and 'TEE-mu Sel-ANN-NEE'.

Now this 'insult' tends to come from people that live in locations like Edmonton and Detroit. You know, where happiness goes to die. Those cities' residents don't know what it's like to live in Southern California. There is a ton of stuff to do, so it's not exactly surprising that the denziens only follow a winner. The visiting team's fans shouldn't complain; without the bandwagoners, they are guaranteed a seat to watch their team play. It makes for shorter beer lines, too.

#3 - I hate this guy, whom I consider epitome of San Jose Sharks fans. 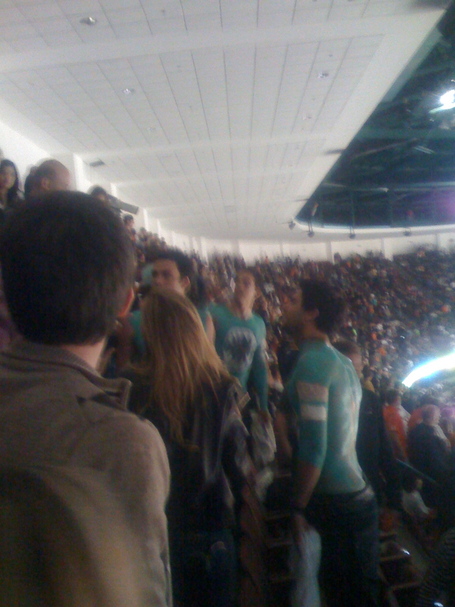 I took this picture on my cell phone at Game 6 of the 2009 Western Conference Quarter Finals versus the Sharks. As you can see, there are three idiots painted teal. They arrived around halfway through the first period. They were hammered. It wasn't a slur your words, wobble around drunk; it was a loud, angry, kind of drunk. My family was so lucky to have these d-bags sit in the row in front of us.

When they weren't doing that ridiculous looking Shark-chomp, they were yelling nasty comments and homophobic slurs, first towards the ice, and then towards the crowd. I'm fine with yelling stuff, it's obnoxious but it's sports. The time I have a problem with the crass yelling is when its within an earshot of kids. There were a lot of kids here and the person the Lead Idiot is yelling up the section to, a Ducks fan, was telling them to shut up. Naturally the inbreds in teal decided to escalate the manner. 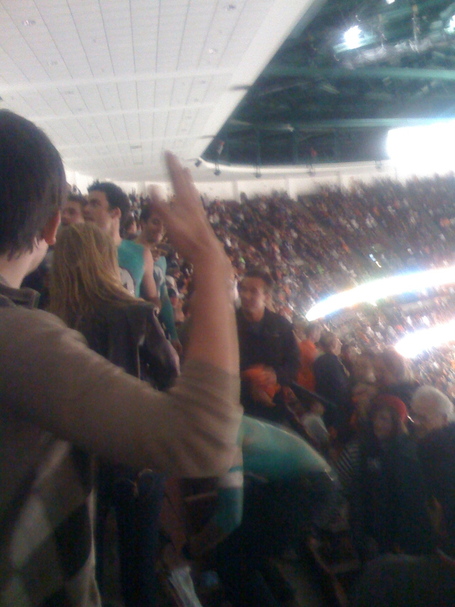 The Lead Idiot, now bending down, is crouching because he just coated my row with beer and was reaching for more. (That's my brother with his arm up.) We're looking at the Stupid Squad, the Stupid Squad is looking up because the same Ducks fan from earlier is now bounding down the rows like stairs towards the group. 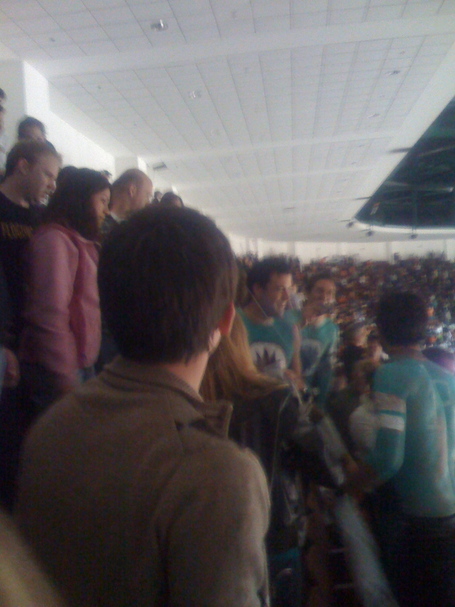 The large, muscular Ducks fan had made it down and was in between the painted ones. You can only see the top of his head. Moments after this picture was taken, Heroic Ducks fan picked up Lead Idiot by his arm and pants and launched him down the front of the section, discus style. No one was sitting in the seats where he landed.

Best part, security watched the whole thing and promptly escorted the Sharks fans ONLY out of the building as we all applauded. Even though justice was served and the No. 8 Ducks beat the No. 1 Sharks, this event cemented my hatred of Sharks fans.

Game 6 is a close second to my all time favorite moment against the Sharks. I was at Honda Center when Corey Perry scored goals 48, 49 and 50 against SJ. Not only was it a hat trick, and the 50th goal, it was Corey Perry's. Pretty much every team hates our favorite flesh-colored bearded Perry. Pears owns the Sharks. In 43 games played, he has 18 goals (4 of which are game winning), 15 assists with 12 blocked shots, 10 hits and 132 shots on goal. Surprisingly, his penalty minutes again SJ are a very un-Perry like low of 56.

Few things make me more happy than going back and looking at the numerous prognostications across the years where the Sharks were favored to make it to the Stanley Cup Final and/or win the Cup. The only time I will - ever - team up with Kings fans is to laugh at the Sharks. I guess winning the President's Cup is neat-o. It is a bowl that you could eat your cereal out of; however, our bowl was slightly deeper and a lot more shiny.