Outside the Nest: Update On Ducks and Ducklings Around The World

There are Anaheim Ducks playing hockey right now, just not in the NHL. Welcome to the first installment of our Outside the Nest.

Share All sharing options for: Outside the Nest: Update On Ducks and Ducklings Around The World

Truthfully, that's a tremendous amount of work one needs to do to if they wish to stay updated on hockey during the prevailing NHL lockout. Thus, Anaheim Calling presents to you Outside the Nest, your once a week stop for all the news concerning Anaheim Ducks prospects playing minor-league hockey.

Since we're getting more free time by the day (thanks, NHL & NHLPA!), we will include updates on the four locked-out Anaheim Ducks: defenseman Luca Sbisa (HC Lugano in Switzerland), forwards Matt Beleskey (Coventry Blaze in Britain) and Nick Bonino (HC Neumarkt-Egna in Italy), and goaltender Viktor Fasth (Tingsryds in Sweden).

Below is your inaugural edition of Outside the Nest, with five different sections: POW (Prospect of the Week), Hot N' Cold (who's hot and who's cold), Stats Update (rundown of all your stats), Ducks Across the Pond (locked-out Ducks) and Week at a Glance (the 7-day schedule). Since this is the first edition, we'll be spending more time on player introductions, Status Update, and your Week at a Glance. Shall we begin?

Of the previously mentioned 20 Ducks, there are a majority playing in the NCAA.

Martin Madden and the scouting department drafted three USHL standouts and one player from the US National Development Team in the 2012 NHL Entry Draft. Those four players joined four more Ducks prospects already in the NCAA ranks to begin the season. This group is the largest portion of the Ducks' prospect pool.

The other two prospects were both selected early in the 2012 entry draft. The first is Nicolas Kerdiles, a C/LW prospect who was selected 36th overall by the Ducks. Kerdiles is currently suspended by the NCAA, and coincidentally, recently injured.

The second is a converted center, now playing left wing for Northeastern University, Kevin Roy. Roy has tremendous offensive upside, which earned him USHL's Player of the Year in 2011 for the Lincoln Stars. Drafted in the 4th round, 97th overall, Roy is looking like a major steal. He earned Hockey East Rookie of the Week honors in early October, and is co-leading Northeastern in points. He also has insane dangles. Hmm, a diminutive left winger who has offensive upside taking the Hockey East by storm? Reminds me of someone. Alas, I digress.

The next contingent of players are guys playing in the best hockey development system in the world, the CHL. Breaking down the CHL into subdivisions: there are three players in the OHL, one in the WHL and one in the QMJHL.

Rickard Rakell, first round, 30th overall pick in the 2011 NHL Entry Draft, has quietly played some very good hockey for the Plymouth Whalers. Rakell centers the top line, with Senators prospect Stefan Noesen to his right, and Capitals prospect Tom Wilson to his left.

Also in the OHL is top goaltending prospect John Gibson. Gibson, selected 39th overall in 2011, is among the OHL's elite; playing in his second season with the Kitchener Rangers. The Pittsburgh native is putting together a tremendous season thus far.

Lastly there is another 2011 draft pick, center Joseph Cramarossa,. "Cramberry" is playing in his first full season with the Belleville Bulls, and his fourth season overall in the OHL.

The WHL's Calgary Hitmen is home to 2012, 7th round pick, defenseman Kenton Helgesen, and in the QMJHL for the Rouyn-Noranda Huskies is punishing defensive-defenseman Andrew O'Brien, a 5th round pick in 2012.

There are four players playing in the Elitserien.

The first among among them feisty left winger Max Friberg. Friberg is a left winger who plays for Timra IK. Chris did a terrific write-up on him earlier in the lockout off-season.

Finally, there are three players who were out-righted to the newly minted Ducks' ECHL affiliate, Fort Wayne Komets. Among them are forwards Josh Brittain and Matt Kennedy, as well as goaltender Marco Cousineau. 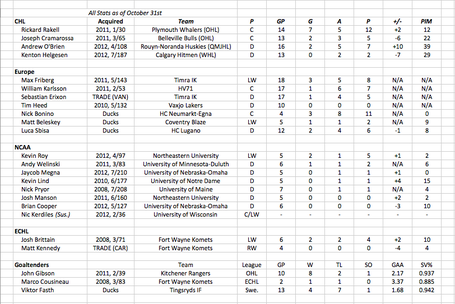 - In the few games Bonino has played for his new team, he looks great.

- Rakell is putting up almost a point-per-game pace, and

- Although William Karlsson is still getting adjusted to the upper-league, he looks good as well.

- Kevin Roy is the standout so far in the NCAA

- Among goaltenders, Fasth looks dominant, even though his record doesn't show it

- John Gibson is in All-CHL form.