Future of the Franchise Friday: Rakell-ing Up Points

In this edition of F-OFF, Rickard Rakell is a machine, Max Friberg is ice cold and Nic Kerdiles makes his season debut for Wisconsin after paying for dinner with a 10 game NCAA suspension.

Share All sharing options for: Future of the Franchise Friday: Rakell-ing Up Points

Prospect of the Week (POW)

The Prospect of the Week is Rickard Rakell of Plymouth Whalers (OHL). The center helped catapult the Whalers past the Sarnia Sting for sole possession of first place in the West Division. In six games, Rakell had two goals and four assists, averaging a point-per-game. In an 8-7 Texas style shootout over the Saginaw Spirit, Rakell posted a three-point effort and improved his plus-minus rating from plus-4 to plus-7; helping Plymouth to a 3-2-1-0 record over two weeks.

For the first time since 2006-2007, the Whalers were pre-season favorites to with the J. Ross Robertson Cup. Head coach Mike Vellucci decided to keep Rakell, and Senators 2011 first round draft pick, Stefan Noesen, together for the time being. Together, Rakell has aided Noesen's recent tear of eight points in four games.

The Whalers schedule starts to soften up, as they'll see the Kingston Frontenacs (7th East), Ottawa 67s (9th East) and Eerie Otters (10th West) in their next three games. If he keeps playing like this against weaker teams, Rakell could be a candidate for back-to-back POW awards.

Karlsson put together a mini hot streak for HV71, as predicted in the previous edition of Future of the Franchise. While maintaining status as his team's top junior player, Karlsson has kept his groove, posting four points in six games for first place HV71. Karlsson is showing sustained offensive prowess in the upper league, a benchmark that seems reasonable to expect consistently from now on.

Last time we checked on Welinski, there wasn't much to write about. The freshman defenseman, and reigning USHL Defenseman of the Year, was still becoming acclimatized to the more pressing NCAA schedule. Now, through 10 games, Welinski is showing why the Ducks drafted him.

Unlike the abundance of defensive-defensemen in the Ducks' minor system, Welinski is an offensive dynamo. His booming shot and swift skating has ranked him fifth among freshman defenseman, 23rd among defensemen, and tied for 93th overall in league scoring.

Friberg has hit a rough patch in his second season with the Elitserien's Timra IK Red Eagles. While his current total of four goals and 10 points through 24 games has already matched his 48-game total of the prior season, Friberg has only posted one goal in his past five games. He stood atop Timra's scoring table for much of the year, but has now been displaced by Niklas Nordgren. The tenacious left winger needs to rediscover his offensive spark.

Cooper has had a paltry start to the season to say the least. For a two year, All-USHL Second Team recipient, Team USA camp invitee, and a participant in the 2012 USHL/NHL top prospects game, he has posted zero points, is a minus-2 with 10 penalty minutes through his team's first eight games, On top of that, Cooper was scratched for a double-header against UMD. UNO's record with him in the lineup? 4-3-1. Without him? 2-0-0. 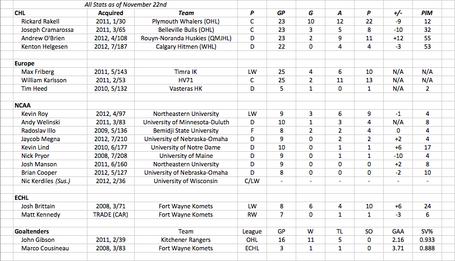 CHL: Joseph Cramarossa has increased his offensive totals, posting 1G, 2A in the past 7 GP, but tacking on minus-6 more to his horrid plus-minus rating shouldn't come as a surprise considering how much the Bulls lean on him as a shutdown pivot ... Andrew O'Brien has 2A in 4 GP and a plus-2 increase for the Huskies and he's still just as nasty. He added six more penalty minutes, which ranks second on the team ... Kenton Helgesen has increased his productivity, leading to an honorable mention in the Hot N' Cold section. In his last 6 GP, he has 2A, a plus-3 increase, as well a drastic swell from 29 to 53 PIM, putting him within 10 PIM of his 2011-2012 total.

NCAA: Biggest news is Nicolas Kerdiles, University of Wisconsin forward, will complete his 10-game suspension and finally play next week when UW plays Denver on Nov. 30 [Ed. Note: Game will air on NBCSports] ... UNO sophomore defenseman Jaycob Megna played a good stretch of games, with 1A, +2 and 2 PIM in 2 GP for the Mavericks ... Radoslav Illo, Anaheim's 2009 fifth rounder, is finally adapting to the college game with 2G and 2A in 8 GP for Bemidji State.

ECHL: Josh Brittain continues to score with Fort Wayne, adding 3G and 2A in 6 GP for the Komets. His 10 points are good for third on the team ... Forward Matt Kennedy (leg) and goaltender Marco Cousineau (groin) are listed on the Komets website as no longer with the team, as it's assumed they're rehabbing.

Very busy night Friday, with every team, except the Swedish clubs and Maine, are in action ... In the NCAA, the best game is North Dakota visiting South Bend to take on prospect Kevin Lind and the 8-3 Fighting Irish ... Calgary faces 2013 draft-eligible Hunter Shinkaruk and the Medicine Hat Tigers ...The Game of the Night is in the OHL, as the red-hot Belleville Bulls visit Dougie Hamilton and Ryan Strome of the Niagara IceDogs. ... Next week in Sweden, Max Friberg and Timra host Matt Duchene's Frolunda HC squad on Tuesday and then a Sammy Pahlsson-less (ruptured Achilles) MODO on Thursday.

A big reason why Kenton Helgesen's penalty minute total jumped so much in the past two weeks is because he was involved in three different fights. Here they are.