Outside The Nest: Nick Bonino is a Scoring Machine (in Italy)

The future is bright in Anaheim. Well, it is if Bonino and Beleskey can keep their European scoring touch when returning to the States.

Share All sharing options for: Outside The Nest: Nick Bonino is a Scoring Machine (in Italy)

A hectic seven days in the minor-leagues for Ducks' prospects and emigrated players. There were a bountiful amount of road trips, one transfer, one contract expiration and what is beginning to look like an utter domination of one overseas league.

Since this is the first formal edition of Outside the Nest, we'll kick things off with POW, the Prospect of the Week. The inaugural POW award winner goes to the most consistent of all the Ducks' prospects, Kitchener Rangers goaltender, John Gibson.

Prospect of the Week (POW)

Facing a combined record of 43-20-2-7, Gibson started on Thursday night against the Niagara IceDogs. Niagra has the OHL's leading scorer, Islanders draft pick, Ryan Strome and the recently awarded OHL Player of the Week, Brett Ritchie. Gibson fared well, only allowing one goal from Niagara, but Kitchener couldn't find the score sheet in a 2-0 loss.

On Saturday, against the first place Owen Sound Attack, Gibson allowed in only two goals. Kitchener defenseman Ryan Murphy found the net in overtime for a 3-2 win.

John Gibson is making a case to be the best goaltender in the OHL. His current stats are all among the league's best: 2.04 GAA (2nd), 0.937 (T-1st) and one shutout (T-2nd). His consistency is a welcome sight. It seems every time he is between the pipes for Kitchener, they have a very good chance to win. His play is a big reason why the Rangers are only three points behind Owen Sound for the Western Conference lead.

Andrew O'Brien seems to be a weekly occurrence for Outside the Nest. He put together another stellar week, even though his team faltered a bit. In the three games, O'Brien amassed two more assists and is an aggressive force for the Huskies with 10 penalty minutes and nine hits in three games.

William Karlsson's first season in the 'big leagues' got off to a shaky start, but it's starting to come around. After earning two assists this past week, and nine points in his first 19 games, He has the highest point totals of the four juniors on HV71. Being asked to play top-six minutes, as well as a defensively-responsible game for HV71 seems to have curbed his offensive totals. Last year he had 45 points in 46 games at the Junior-20 level. With a lot of season left, he's starting to trend upward.

A third-round pick in 2011, Joseph Cramarossa plays a terrific two-way game. Traded from Mississauga last season, this is Cramberry's first full year with the Belleville Bulls. His latest starts are unimpressive: five points in 16 games for the Bulls. Cramarossa will need to improve to keep his top-nine role.

Kennedy, one piece of the 2010 Ryan Carter trade, isn't pulling his weight for the Ducks' ECHL affiliate, the Fort Wayne Komets. Kennedy has registered a modest one assist and a minus-3 rating through his first six games. 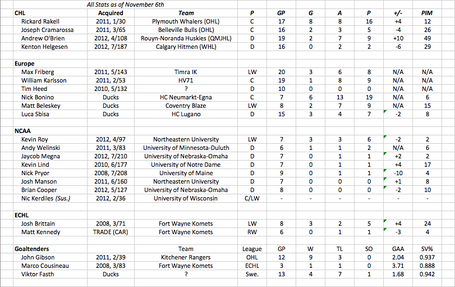 CHL: Rickard Rakell has kept almost a point-per-game pace, three of his four points in one week came from one game, a 4-1 win over Saginaw on Tuesday night. There has been some line-shifting on the Whalers, but Rakell has kept his spot as the top line center.

Europe: Max Friberg is tied for first in pointson Timra. Tim Heed is unemployed, looking for an Elitserien or J20 team. Goaltender Viktor Fasth contract with Tingsryd has expired. He has sustained some hip and groin strain, so extension talk has been put on hold.

NCAA: Kevin Roy had three more points over the weekend, putting him in the outright lead for points on Northeastern. They were swept by Merrimack, as Roy's second game was particularly ugly as he registered a -3. 6 points in 7 games is still very good for a rookie. Welinski and UMD had the week off, and while Nick Pryor's +/- rating might seem ugly, Maine is 1-8-0 - everyone's +/- is horrid. And, Kerdiles is still suspended.

ECHL: Josh Brittain has found a place to flourish. Tied for third in scoring on Ft. Wayne, Brittain has five points in eight games. Marco Cousineau declined enough to demote him to third-string goaltender.

Ducks Across the Pond

If there was a Player of the Week award for this section, Nick Bonino would win, hands down.

Bonino, a guy not known for his scoring prowess, has found his groove in Italy. Mind you this is a Serie A2 league, but nonetheless, Bonino had three goals and five assists this week for HC Neumarkt-Egna. His first game, Bones scored the game-winning goal, collected an assist and registered 10 shots on goal. Bonino's second game: eight shots, three assists, two penalty minutes and a powerplay goal. The third game: one goal, one assist, four shots and four penalty minutes.

What's even more telling is that he's sixth in Serie A2 scoring with 19 points in seven (7!!) games, only eight points behind the leader. Before Bones arrived in Italy, Neumarkt was 3-3; since then, they have a 6-1 record, including a six-game winning streak. Bonkers. Absolutely bonkers.

In Britain's EIHL, Matt Beleskey found somewhat of a groove for his Coventry Blaze team. In three games this past week, Beleskey broke out for six assists and one goal, catapulting him to sixth on the Blaze in scoring. He's keeping his edge, too, collecting six penalty minutes in the process.

Sadly, Bells wasn't involved in this line brawl between Coventry and Cardiff. Cardiff, feeling not so great about that brawl, went out and signed BizNasty (Paul Bissonette), who has three points in two games. I imagine George Parros would be the EIHL MVP.

Quiet week for HC Lugano defenseman, Luca Sbisa. For his Swiss team, Sbisa boosted his goal total by one, but decreased his plus-minus rating while doing so. We're not expecting Sbisa to put forth a torrid pace, but we don't want him to regress either. Luckily, he hasn't fallen off the map - seven points, eight penalty minutes and 41 shots (5th on the team) in 15 games.

Funny scheduling in Europe. There are breaks in the Elitserien, Allsvenskan, Swiss National League A and Serie A2 in Italy. It culminates with the Ducks' prospects Game of the Week. On the 13th, Max Friberg and Timra IK visit William Karlsson and top-ranked HV71.

In the NCAA, Andy Welinski and No. 20 Minnesota-Duluth, coming off a long layoff, go into Omaha to visit fellow Anaheim prospects Jaycob Megna and Brian Cooper for University of Nebraska Omaha's Homecoming. Nick Pryor and Maine play a road back-to-back against No.17 Mass-Lowell. Defenseman Kevin Lind and No. 7 Notre Dame faces top-ranked Boston College.

And in the OHL, Kitchener plays against the Generals in Oshawa and Plymouth tangles with the London Knights.

An All-Matt Beleskey edition of Bonus Coverage this week. The following helps emphasize how big an NHL player signing in Britain is, even someone as little-known in the NHL as Bells is.

According to this source, Days Hotel is helping house Matt during his stay in the UK. Front page news on the Blaze website.

Beleskey during the BBC Midlands Lunchtime news! (They either can't pronounce, or don't say his last name)

And lastly, Matt splits four defenders against Cardiff to pot his second goal of the season. Impressive.