Jen went big time and got media credentials for the charity game last night, and I was there with my family to give a view from the chilly bleachers of Anaheim Ice.

It's been a long time since any of us saw an NHL game. I've gotten a hockey fix from playing (poorly), keeping up on lockout talks (boring/annoying) and I went one Ontario Reign ECHL game a couple of weeks ago. Last night I had an opportunity to see some real NHLers up close and I couldn't pass it up.

Being a charity game, Teemu and the others didn't really resemble what they would be like in a competitive game, but any port in a storm, and of course it was for a good cause.

For anyone who's attended one of the Fedorin Cup games that is held at Anaheim Ice annually, it was pretty similar to that. Ducks PA announcer Phil Hullett served as MC, there was a silent auction including the jersey's off the players' backs, vacation packages and signed sports memorabilia and a raffle of signed items and gift cards. The big difference was that all of the players were locked out NHLers and they played four on four.

The teams wore jerseys similar to the Quebec Nordiques of old, except with the logo of the famed Quebec Pee-Wee tournament front and center. This threw me off when we came in because I saw Teemu Selanne and Jeff Carter Nordiques jerseys for auction and wondered why anyone would bid on such a jersey foul before I realized what they were. The Quebec theme was in honor of the Junior Ducks who will be playing in the tournament this February.

There was a short delay in starting the event and we found out why, five minutes after it was supposed to start as we saw Ryan Miller being shepherded through the crowd to the locker room.

The highlight of the evening for me was getting to take a picture with Scott Niedermayer and my nine month old son, who was thisclose to being named Scott.

Naturally, Teemu got the biggest reaction from the crowd as the teams were announced, with George Parros a close second. I also heard a couple of boos though during Teemu's ovation from some despicable monsters mascaraing as human beings and/or Kings fans.

On the ice, it was exactly what you would expect of a charity game. The skating was casual, no hitting, very limited defense, but hey it's hockey.

Despite the expected lackadaisical pace, the passes impressed me. Being that close to players of that caliber I can honestly say that if I had tried to receive a pass from one of them I would be in the hospital with two broken wrists.

Not that it means anything, but Jonas Hiller was one step short of being a brick wall for most of the game. Of course as soon as I voiced that opinion to my wife, he gave up about four goals in the span of two or three minutes. Most of the saves weren't anything to write home about; he had plenty of time to react and guys were over passing, but at least three times he got over when the net looked WIDE open.

Teemu's first goal (I assume he had more than one in a 9-6 game) was pretty sick too. He came down on one of the many breakaways of the game and put some silly moves on Miller before going backhand shelf. Still, the on ice highlight of the game was Scottie Upshall's between the legs goal on Hiller in the third period.

The only other note I have on the game itself is that the "Ducks" Team (actually called Quebec Home) was much more interested in playing defense, since they had Bryan Allen, Tony Lydman and Francois Beauchemin making up nearly half of their roster.

Overall it was a fun way to get out, see some hockey and raise money for CHOC.

Here are some of the least blurry pictures we took: 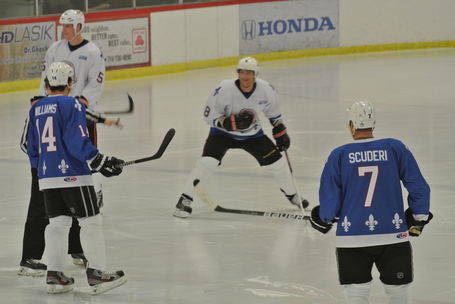 "You want ME to take the faceoff?!" 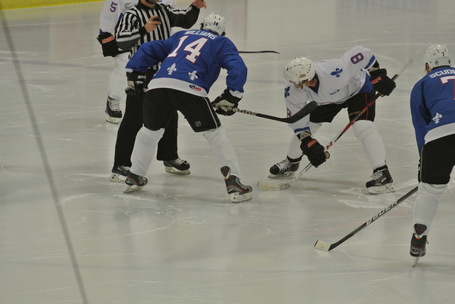 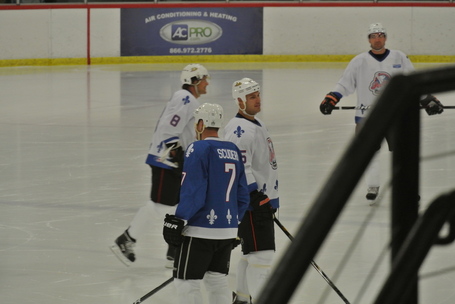 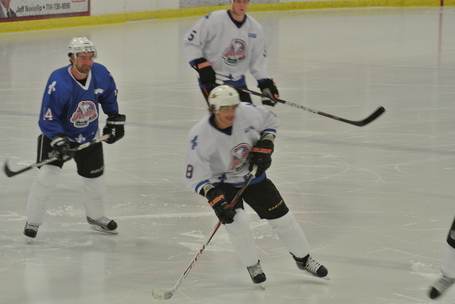 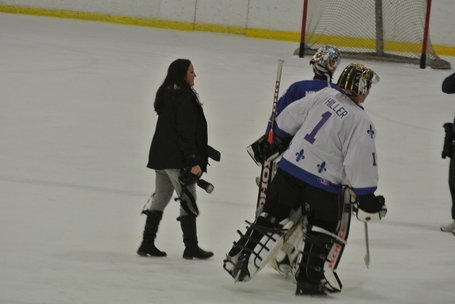 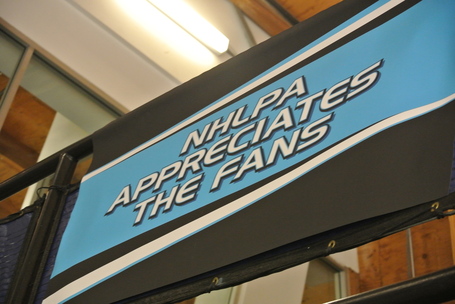 Icepocalypse 2012: Playing for free at Anaheim Ice, a charity game for the kids