In this edition of FOFF, we recognize UMD Bulldog Andy Welinski for his steady production, Joseph Cramarossa for finally emerging and Max Friberg's nomination to Sweden's WJC Team.

Share All sharing options for: Future of the Franchise Friday: Playing Well(inski)

Player of the Week

For the first time in the short Future of the Franchise series, the Player of the Week comes from the NCAA and is a defenseman. Reigning USHL defenseman of the Year, Minnesota-Duluth's Andy Welinski was the best Ducks prospect over the past two weekends. [Ed. Note: For some strange reason SB Nation lists him as a Winnipeg Jet]

Welinski registered one assist in each of UMD's two games against St. Cloud State two weekends ago, as they split the series. He did not register a point as the Bulldogs crushed Michigan Tech 7-3 last weekend, but was crucial with three assists in their 4-4 tie with Tech the next day.

Two consistent weekends ranks Welinski (1G, 8A) as the second highest point producer for Ducks prospects in the NCAA, and first among all Ducks prospect defensemen.

Mired in a slump to start off the season, Belleville Bulls center Joseph Cramarossa (5G, 7A) seems to (finally) be finding consistent offensive output. For a 3rd round pick in 2011 who most Ducks fans believe has underproduced, Cramarossa's two-weekend score of four points places him third overall on his team.

Kevin Roy has been hot throughout the season, and he doesn't seem to be slowing down. Arguably the most consistent Ducks prospect outside the OHL, Roy (7G, 6A) added four more goals to his impressive rookie tallies.

About the only player to shoot blanks recently, William Karlsson's mini hot streak appears to be over. Karlsson (3G, 12A) supplanted Max Friberg recently as the Ducks' most consistent prospect in Europe, but has been held off the score sheet in his past three games. 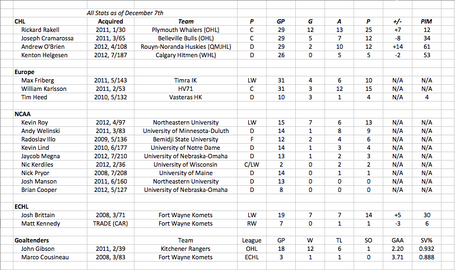 OHL: Rickard Rakell (12G, 13A) has continued to excel, moving into sole possession of the Whalers scoring lead. His impressive and consistent play this season also earned him an invite to the World Junior Championships with Team Sweden ... John Gibson has suffered recent injury trouble, as Kitchener has moved on with Franky Palezzese as their number one goaltender. It's undetermined about whether Gibson's injury will keep him off Team USA for the World Junior Championships.

Europe: Max Friberg (4G, 6A) broke out of his mini funk recently with two goals in three games for Timra ...Tim Heed has adjusted well to his Vasteras junior club, posting four points in 10 games, a vast improvement from his time with Vaxjo (zero points in ten games).

NCAA: Last weekend marked the glorious Nic Kerdiles' return from his 10-game suspension, as he accumulated two assists in his two games.

Kenton Helgesen and the Calgary Hitmen just released a beautiful rendition of the Christmas hit, "Rockin' Around the Christmas Tree".