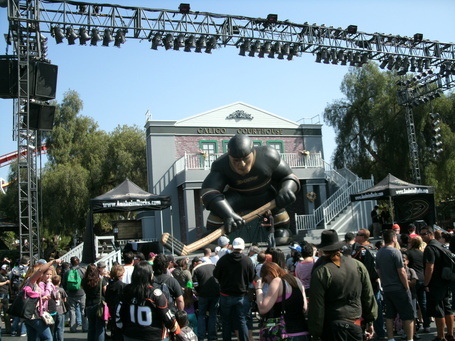 For the third straight year, I attended the Ducks' Kids Club Party at Knott's Berry Farm on Saturday afternoon. For those who are unfamiliar with the event, it's basically a Q&A and autograph session with select players from the team (usually rookies and other young guys), as well as the Kids Club captain. The party is open to anyone with a Kids Club membership (those packages they sell for like $20 throughout Honda Center) and you can even purchase additional guest passes for friends and family (as we often do).

This year's captain was George Parros, and as you can expect, there were fake mustaches and #16 shirts all around Knott's today. Joining Parros at this event were Kyle Cumiskey (who still hasn't played a single minute for the Ducks), Cam Fowler, Nick Bonino, Jeff Deslauriers, and Devante Smith-Pelly.

While the event was slated to begin at 1:30, practice ran late at Anaheim Ice and the players arrived a few minutes late. Some of the players came together, and Rebecca, Trevor, my mom, and I were actually hanging out near the entrance to the back-stage area where the players were entering. I wasn't paying enough attention to get a picture of Cumiskey, DSP, Bonino,and Deslauriers when they arrived, but I did snap pictures of Cam Fowler (who came in the main entrance like anyone else—I find this hillarious) and George Parros (who came with his twin babies and wife in tow). 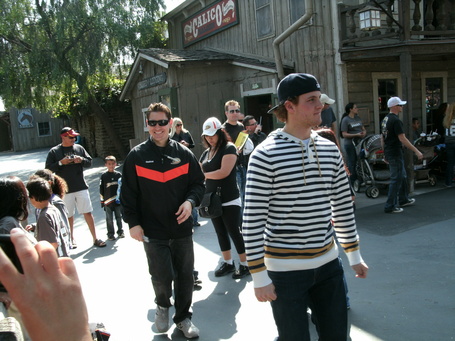 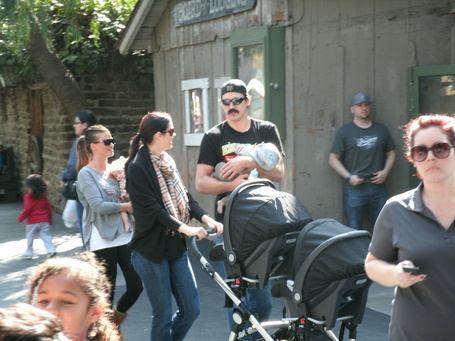 Once everyone had arrived, TV play-by-play man John Ahlers took to the stage to introduce the players and begin the Q&A.

If you've ever attended one of these in the past, the questions were about what you'd expect. Since kids are able to ask all of the questions, they range from "What's your favorite flavor of ice cream" to "What do you do when you're not playing hockey?"

You can watch the videos for more info if you'd like, but here were the few notable items:

After the questions ended, the players broke out into three separate autograph locations. You end up waiting in line for a while to get all of the autographs, so we ended up taking a lot of pictures. Trevor update! 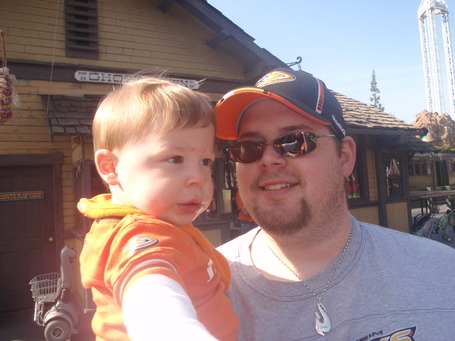 In previous years, we were trying to get Olympic pucks and other stuff signed. This year, my biggest goal was to talk to DSP and tell him we're all pulling for him to get top line minutes. When I finally got up to DSP (who was signing with a very bored-looking Nick Bonino), I asked him if he had talked to Bruce about playing with Getz and Perry. He laughed and said that he didn't think he was supposed to ask those kinds of things yet. I then told him I wrote for a Ducks blog and that we all thought his hard working style would mesh well with the twins. He seemed to be a little embarrassed by the statement, but he was very gracious.

Overall, it was a pretty good day. The weather was great, and the Ducks claimed they had record turnout this year. The only strange thing was finding this on the ground while we were waiting for the festivities to begin. 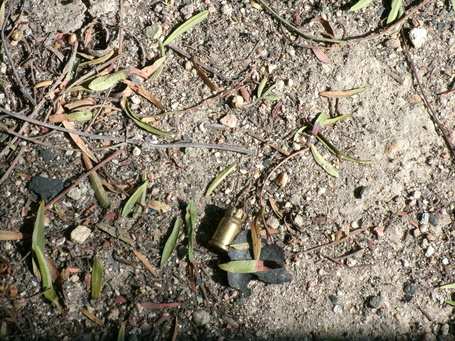 There were no annoying Kings fans this year (unlike last year), and Trevor seemed to enjoy meeting the players and the park a lot more than he did before. I seriously can't believe how fast he's growing up. 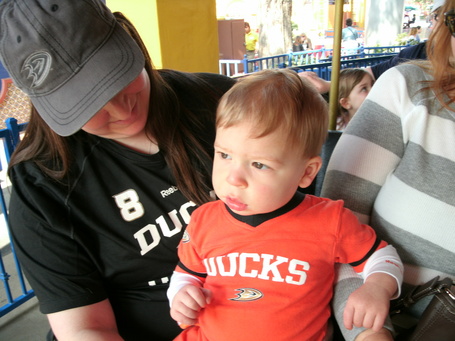