Share All sharing options for: Murray & Boudreau Offer Insights and Warnings at State of Franchise Address 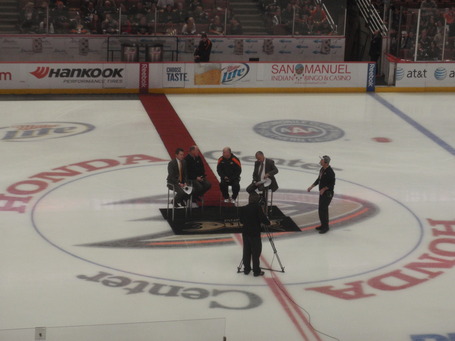 While I'll have a full breakdown (with video!) of the Skills Showdown tomorrow, I wanted to highlight the other critical piece of today's event at Honda Center. Before the actual fun began, General Manager Bob Murray and coach Bruce Boudreau spent about 30 minutes answering questions and giving an overall State of the Franchise. Murray and Boudreau covered a range of topics and made several interesting statements ranging from the state of the farm system and their goals in the draft to a not-so-subtle message that some of the team's best players need to start delivering more effort.

I did my best to take notes about everything Murray and Boudreau touched on, but I'm only one man with a legal pad. I feel that the following notes accurately summarize the high points, but please do not take any of these as direct quotations.

So some pretty interesting stuff in there, with the last comments obviously being the most important in my opinion. Whether or not this are just more empty threats remains to be seen.