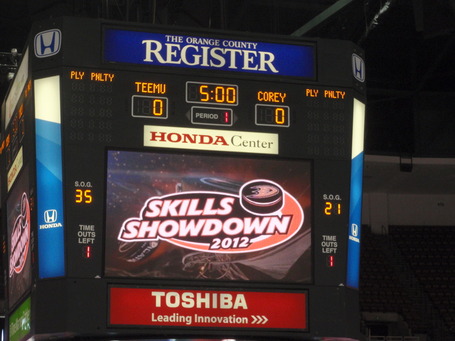 After Murray and Boudreau finished their comments, the team took the ice for a brief 20-minute practice and warm-up prior to the beginning of the Skills Showdown. Joining the Ducks on the ice was Francois Beauchemin's son, Samuel, who completely stole the show.

He was passing back and forth with his dad, Perry, and Bobby, and the goalies were letting him score on them. When the Ducks were whistled to skate hard, little Beauch was right with them, chugging out strides during the sprints and gliding during the breaks. It was freaking adorable.

The Skills Showdown pretty much followed last year's format, with kids (boys and girls) from the Junior Ducks program running through the events before the pros did them. Each of the competitions was worth a different number of points, and the teams got points for both their own play and that of the youth players.

Team Selanne featured Teemu, Ryan Getzlaf, Jeff Deslauriers, Beauchemin, and others. While Team Perry featured Corey, Bobby, Jonas Hiller, Lubomir Visnovsky, Saku Koivu, and others. On paper, it seemed like Team Perry was the stronger of the two teams.

King of the Shootout

The first competition was basically a shootout relay where three players had 50 seconds to get off two shots each. The shooters actually had less success than I imagined they would, although Jeff Deslauriers' play (dude made some great saves) and Jonas Hiller's goal posts had a lot to do with that. Nick Bonino and Getzlaf each had some nice moves, but the most memorable moment came when Corey Perry reprised his mini stick routine from the All-Star Game Skills Competition:

Needless to say, the crowd went nuts for Perry.

As the name implies, this was basically a time trial lap around the ice. Everyone pretty much assumed that Andrew Cogliano would win this, but Cam Fowler actually torched the competition, finishing just his lap in just over 14 seconds. Lubomir Visnovsky also opened some eyes, finishing just a tenth of a second slower than Fowler.

I want to take a minute here to mention Bruce Boudreau. He was on the mic with Kent French and Steve Carroll and he was flat-out hilarious. I don't think he made a single comment the entire day that wasn't biting and sardonic. When he wasn't ripping on Teemu for his age, he was throwing out amusing quips about both himself and his players. After Perry scored with the mini stick, he mentioned that it was great to see Corey score with Jason Blake's stick. He really added a fun element to the day's proceedings and you couldn't draw a starker contrast between him and the man that preceded him. I'll admit it: I love me some Bruce.

The next competition was a completely new idea that I've never seen someone do before. It was basically a two-part event that tested a player's ability to loft pucks, as well as his ability to hit an empty net. In the first part of the drill, a player stood in the crease and lobbed pucks to another player at the blue line, who had a small bucket attached to a stick. It sounds all sorts of crazy, and it was. It was pretty amazing seeing how effectively the lobber and catcher were able to coordinate and catch the pucks. Both Corey Perry and Ryan Getzlaf performed well, although Bobby Ryan also managed to get some good loft on his pucks. Perry was clearly the best though, and even Brian Hayward noted that Perry's practice of roofing pucks in warmups probably served him well in this contest.

The second part of the event was to take six rink-wide shots at an empty net, with the sixth shot needing to travel the distance and make it into the net completely on the fly. Sadly, no player was able to perform the task, although both Getzlaf and Bobby managed to hit halfway up the glass behind the goals on their attempts with the orange puck.

There was also a moment of "controversy," when Perry shot his orange puck along the ice instead of through the air. Perry claimed he didn't read the rules and opposing captain Selanne protested Perry's ability to take a second shot (which he missed). There were a few occasions throughout the day where the players hammed it up a bit for the crowd, and it was really great to see everyone show some personality. I've said it before, but you really get to see the guys cut loose and have some fun at this event.

Aside from maybe the Hardest Shot, this is probably the one event that the fans most look forward to. It's your standard shoot at the target event, where players have 18 seconds to hit all four targets. Obviously, it's pretty damn impressive if anyone is able to do it in just four shots.

At last year's event, George Parros stunned the world when he went 4-for-4 on his targets. Before shooting, Parros claimed that it was an injustice that his accuracy was never rewarded with more time on the power play. Georgie also promised to repeat the feat at this year's event.

Not to be outdone, Corey Perry stepped up right after George's perfect run and also aced the competition. It was pretty crazy to see one guy go 4-for-4, but seeing two was just awesome.

Aside from Parros and Perry's perfect scores, Blake went 4-for-6, Sheldon Brookbank went 4-for-7, and both Bonino and Teemu went 4-for-8.

Before the event began, Bruce predicted that Ryan Getzlaf would lead the way and he ended up being right. While no Duck cracked the 100 MPH mark, Getzlaf came close with a 99.3 MPH shot that got a nice ooh from the crowd:

Luca Sbisa finished in second with a 98.8 MPH shot and Bobby was third with a 98.2 MPH shot. The least impressive efforts came from Jason Blake and Saku Koivu, who finished with shots of 89.3 and 91.6 MPH.

The final event of the day was a puck-handling relay that saw players sprint down the ice, pick up a puck, and skate through a series of cones. In the one-on-one competition, Cam Fowler and Luca Sbisa competed in an extremely close contest that Fowler won by a nose:

The team relay was next, with Rod Pelley, Matt Beleskey, and Beauch skating for Team Selanne and Nick Bonino, Nate Guenin, and Bobby Ryan skating for Team Perry. The competition was actually neck-and-neck through the first two skaters until Frankie cheated by taking off two seconds early. Bobby almost caught up with Beauch, but the head-start proved too much to overcome. Those damn sneaky French Canadians!

The overall score came down to the final competition, so it was cool to see the players skating hard and competing throughout the entire day. As I said before, it really was a good time. The players, and Bruce Boudreau, showed a ton of personality and a good time was had by all.

And finally, a little something for Daniel. Before any of the festivities began today, Devante Smith-Pelly was out on the ice testing his ankle with some skating drills and one-timers. He seemed to be a little ginger on the ankle at the end of his drills, but that's not completely surprising. Overall, it was nice to see him back on the ice.