Share All sharing options for: Robidas Hit on Perry: Fair or Fowl?

Corey Perry injured his shoulder in last night's game versus Dallas after violently colliding with the end boards with Stephane Robidas in tow. Robidas received a two-minute boarding penalty for what the referee believed to be in his involvement in the hit. Perry's 'upper-body injury' appears to not be serious and he is listed as day-to-day.

This incident has amassed a whirlwind of controversy aided by none other than Ducks head coach Bruce Boudreau: (via OC Register)

"If the [Perry] penalty wasn’t a five-minute penalty, I don’t know what is," Boudreau said. "He’s in the most vulnerable position. Head first going into the boards and he’s getting a shove. Whether it’s a little shove or a big shove, it’s a shove of a defenseless person into the boards. I don’t know how many times I’ve heard that. And you put your best player out in a game we had to win. Any hit that’s into the boards for a defenseless person … isn’t that one of the criteria," he said. "Even if he didn’t extend his arms, he pushed him. If he didn’t, he held him. Pushed him and held him arms where he couldn’t protect himself."

Having had Boudreau as a coach for a couple months, we know one thing for sure - he wears his heart on his sleeve. He has no problem calling out the referees in the post game or taking a swipe at a player on the other (usually winning) team. In a way he's lucky for being in the Western Conference and Anaheim in particular. The media following the Ducks is small and his comments don't get talked about for days like they did in Washington.

His comments on Robidas will be big in Dallas and kinda big in Anaheim should Perry not play on Monday. As of writing this, Puck Daddy is the only noted media outlet covering the story outside of Dallas and Orange County Which leads me to believe that the Shanahammer won't come down on this one, just for lack of major controversy alone. The larger the outcry, the bigger (and quicker) the NHL's response. Sadly, even with Brendan Shanahan at the helm, only the most heavily covered (by the media) hits involving elite players are reviewed by the league office more frequently than overlooked hits to supporting players.

Think of Francois Beauchemin's hit on Mike Fisher and the outcry it caused for an obviously legal - yet brutal - open ice hit. After everyone went nuts because Mr. Carrie Underwood left the game, the NHL responded quickly the next day by saying that Beauch's hit did not qualify for supplementary discipline. Where that hit caused an uproar, I'll bring you one that's worse and didn't.

On Thursday night's game versus the Oilers, Eric Belanger raises his shoulder to Sheldon Brookbank's head and Sheldon's entire face is driven into the wall. (Images are screen captures from NHL's GameCenter Live Archive) 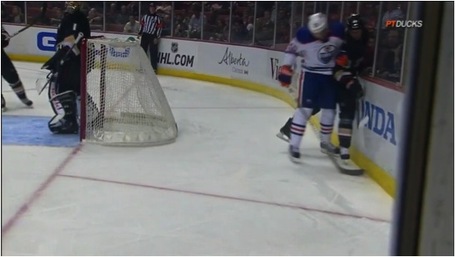 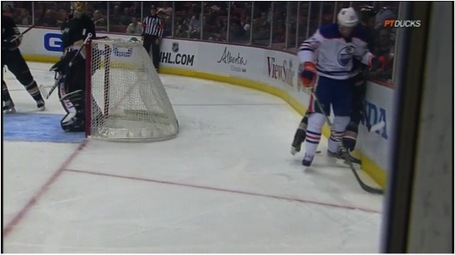 There was no penalty on the play, nor was there an outcry from Boudreau on the hit, or a response from the NHL. To me, this play is far worse than the one on Perry. Thank God that it was Perry's shoulder and not his head that slams into the boards, but what about Brookbank? Belanger lifts up to get his shoulder to Brookbank's head. Sheldon was visibly shaken up on the play and missed a couple shifts, but ultimately returned to finish the game. With the dazed look in his eyes on the bench, I'm shocked it wasn't a concussion.

In the quote above, Boudreau says, "...If the [Perry] penalty wasn’t a five-minute penalty, I don’t know what is." I love Bruce, but he needs to be this fired up about Brookie as he is about Perry. It shouldn't matter who the player is and his standing in the team (or in the league). Yet, when a hit involves the reigning league MVP, it's no surprise that BB overreacted and I expect the league to issue a comment on the hit sometime today.

Obviously, I'm a Ducks fan. I was nauseous to watch Corey Perry in pain and unable to finish the game, but little reality check is in order. Perry falls A LOT. He fell and with his own momentum and Robidas', he crashed into the boards. Also, Perry braced himself with his right arm; thereby, negating BB's comment that Robidas was holding his arms.The incident itself shouldn't be getting anymore attention than it already is. Perry's injury, yes. Robidas' involvement in it, not so much. Robidas does not do anything to deserve supplementary discipline. (Stick tap to Erin at Defending Big D for adding insight with a rules-based perspective.)