I just came home from every girls dream vacation. I’m sorry, what was that? You don’t know any other females who would consider a week in Western Canada following their favorite hockey team a dream vacation (other than those here on Anaheim Calling, I’m sure)? Those crazy chicks don’t know what they’re missing. I know I’ve already stated the basis of this trip, but I’ll go ahead and rehash it quickly. At the beginning of the season my best friend and I decided that we needed to go on a "road trip" with the Ducks. Once we saw that Calgary was the last game of the season it seemed only obvious we make that our destination. Once Edmonton and Vancouver were in the picture, it was set. [Ed. Note: I did this too in 2009-10. Best. Vacation. Ever.]

I wont bore you with any of the details of these games as I’m sure you saw them all. Wait - you mean you didn’t get to watch the Ducks in Edmonton? You missed Nick Bonino’s high flying stick work where he caught his stick out of the air like a baton? Shame!

Below are some pictures, stories, tips and fun tid-bits from my amazing vacation. I won't rub it in too much, but you definitely should have been there! "No Worries", you'll be there next time! (Right after the excessive use of the word - or sound "eh?", Canadians love the phrase, "no worries").

Upon first arriving in Vancouver it was decided we should rent a car and hit the road ASAP. Once we found our bearings we hit the Sea to Sky highway, found a great stop in Horseshoe Bay for some fish and chips and set out to do more sight seeing. 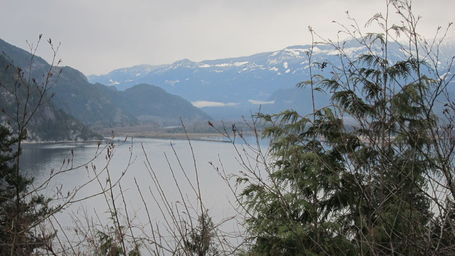 If you'd like an idea of what Vancouver is like just imagine southern California...compacted. The water, downtown area and beautiful mountain ranges are all within 30 minutes of one another. Therefore, you can see 3 different ski lifts lit up at night from the downtown area. Truly beautiful. 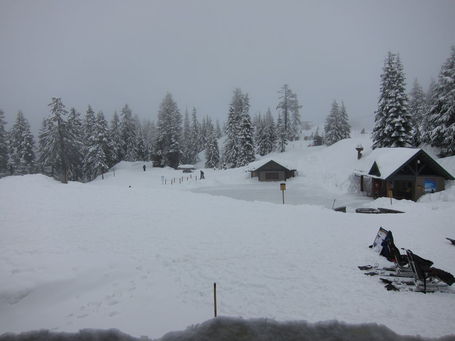 Now, I'll spare you the boring details of our sight seeing adventures (like the fact that my uncle made us visit TWO different fish hatcheries - yikes), but I will say that our trip to the top of Grouse Mountain via the sky tram was amazing. Vancouver has wonderful sights if you're willing to leave the downtown area. On Grouse Mountain we met Dave, a guy from Edmonton who gave us a few suggestions for sight seeing for when we arrived in Edmonton the next day. Well, the SAME suggestions as everyone else - the Mall and Whyte street, but we'll talk about that in the next post.

At the game we weren't razzed too much (In retrospect, NO ONE said anything to us in Edmonton or Calgary...odd, right?). A few fans pointed out that we were to be golfing in a weeks time (jerks) and that it was a rough season for Anaheim. However, we did meet a few fans who were from Vancouver and have been Ducks fans since day one. One guy proceeded to tell me it was because the team was named after him. His last name was "Duck". Which reminds me...if you're reading this Mr. Duck, there is a link to my email at the bottom ::wink::! 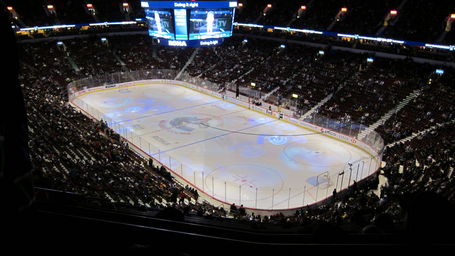 The really crazy thing about Vancouver's arena is the fact that EVERY SINGLE ROW IN THE UPPER SECTION HAS BARS IN FRONT OF IT! What's even funnier is that on these bars is the warning to sit back in your seat, something they take VERY seriously as we saw the ushers tell people to sit back multiple times. 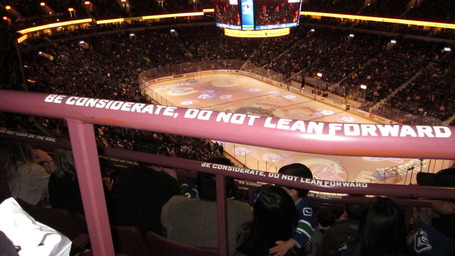 We also noticed that in each of the arenas they change the advertisements on the dasher boards during the intermission. So, next time you're watching a game, pay attention to the boards, I guarantee the ads right in front of the bench will be different during the next period of play.

Vancouver was by far my favorite city. I could live there. Correction, I want to live there. Simply walking in to a restaurant and seeing TSN, TSN2 and the NHL Network on every TV was like a dream come true. Plus, a hockey loving male population doesn't hurt!

We stayed just outside the airport, a few miles south of the Downtown area. The car was most definitely helpful, but getting around was tricky at first. Vancouver has "levels" - bridges and roads that cross, but never meet. But hey, a great vacation is always in the adventure!