Edmonton came in the middle of our trip and here are a few notes about the city before we get started:

- We left Vancouver WAY too soon.

- We didn't get to Calgary soon enough.

- Someone in Edmonton told us that Winnipeg is worse (uh oh...that trip will be interesting.)

- If I was Taylor Hall, I would have requested to be drafted number 2, just so I didn't have to live there.

On to Edmonton, eh!

The next time I visit Edmonton, it will be too soon. In fact, we've now created the phrase, "Screw you, you can go to Edmonton!". Trust me, that's an insult. The ONLY thing Edmonton has going for them (and the one thing they are VERY proud of) is the West Edmonton Mall. Why they need to clarify that it was on the west side is beyond me there is absolutely nothing else there to confuse it with. 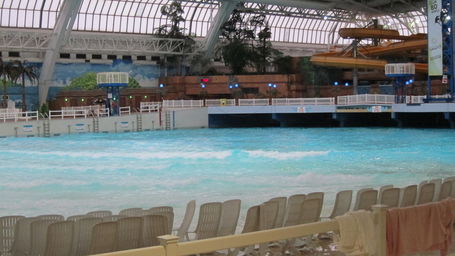 Inside the mall is a water park, 2 miniature golf courses (one of which we did play), an amusement park, a life sized replica of the Santa Maria (yes, Christopher Columbus would be thrilled) and an ice rink. 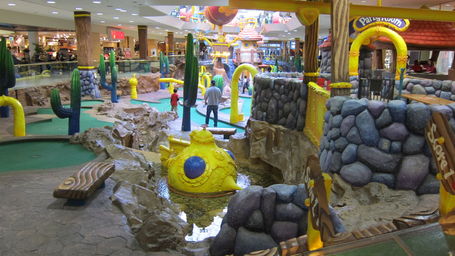 I'll put it this way. We watched the waves for a good 20 minutes even after the water park was closed, we played on one of the worst miniature golf courses ever, and we watched these guys play hockey for a good 30 minutes or so, just to kill time. 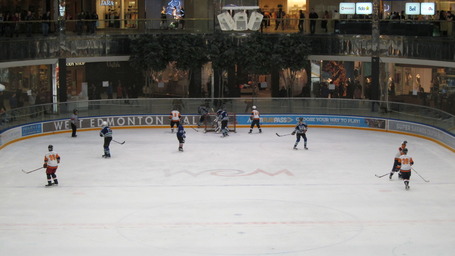 That being said, the best part of Edmonton came during the game. I should preface this by saying no one in Edmonton was particularly cheerful. Understandable, trust me. After the first usher who did not like that we went down to the glass to watch warm-ups finally got off our back, my uncle (due to his excessively chatty nature), met a guy who gave us stickers for our tickets to go to the club level. 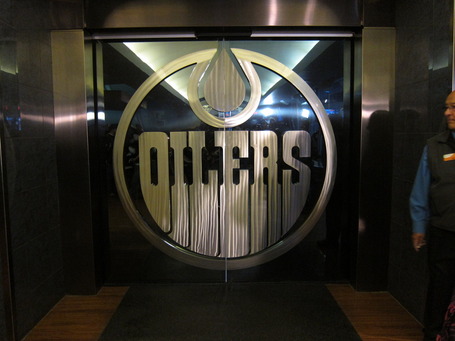 If you've ever seen the cameras focus in on the team as they're taking the bench, the Oilers walk down a walkway through the club level where the fans are lined up. This walkway leads to their bench. The only way to get to this area of the arena is to have "Club access", and thanks to the one dude in Edmonton who wasn't bitter about living in Edmonton, we did. We went down before the start of the 3rd period to catch a glimpse. It was definitely one of the hockey highlights of the trip.

I'm just pissed I didn't mock Ryan Whitney while I had the chance. 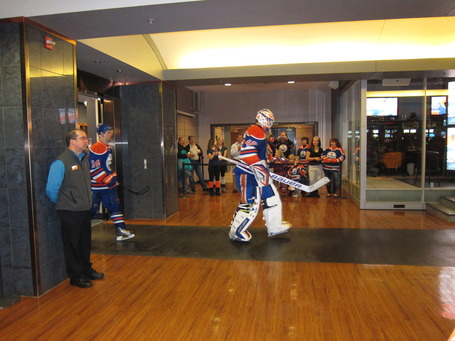 So, if you're ever planning a trip to Edmonton to see the Ducks play...get there a few hours before puck drop and then drive to Calgary as soon as the game is over. Trust me. Oh, and they didn't do a damn thing for their fans during this, their final home game. We got a poster of the team saluting the crowd from center ice upon leaving. Psh!

The day we left my uncle woke us and said, "Is this the day we get to leave Edmonton?"