SK's Trip to Western Canada: Calgary, It's Closer Than you Think!

Share All sharing options for: SK's Trip to Western Canada: Calgary, It's Closer Than you Think!

Visiting Calgary was like a breath of fresh air. Literally. Between the beautiful mountain ranges, the windy conditions, the chilly temperature and the fact that it was NOT Edmonton was simply glorious.

I would have loved a few more days in Calgary just to explore their downtown area, but mostly to spend more time in the Banff National Park. The slogan, "Canada's Rocky Mountain playground is closer than you think!" couldn't be anymore true. The side roadie to Banff National Park was beyond worth it. If not for the views, for the insanely hot waiter with the Aussie accent at the Fairmont Hotel in Lake Louise. Again, sir, I direct you to my email link at the bottom!

As soon as we touched down in Calgary, we got our rental car and hit the road. It was by and far one of the highlights of the trip for me, and it was one I wasn't expecting. 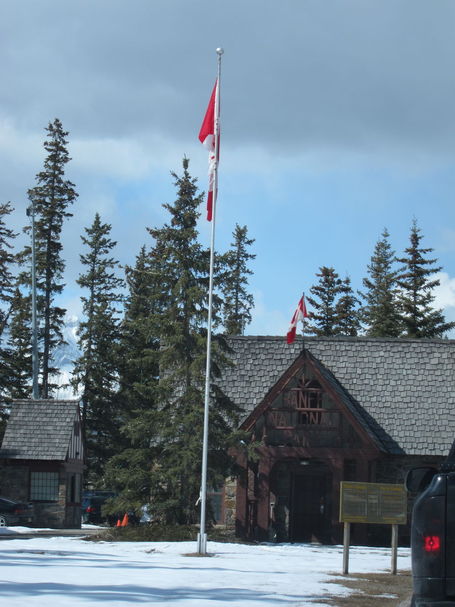 When we arrived in the park, we took the side roads for a more scenic view. This lead us to a stop along the way to Lake Louise where we went on a 1.5 mile hike - in the snow, uphill (at some point) both ways! This snow, which covered EVERY INCH of the trail had seen moments of sun, melted, and re-froze to create a lovely path of ICE. Trekking along this path was often VERY difficult, and both my bestie and my uncle suffered some interesting falls. My uncles' slip came when he tried to throw a snow ball at me and fell on his ass instead. Karma is a bitch, bud! 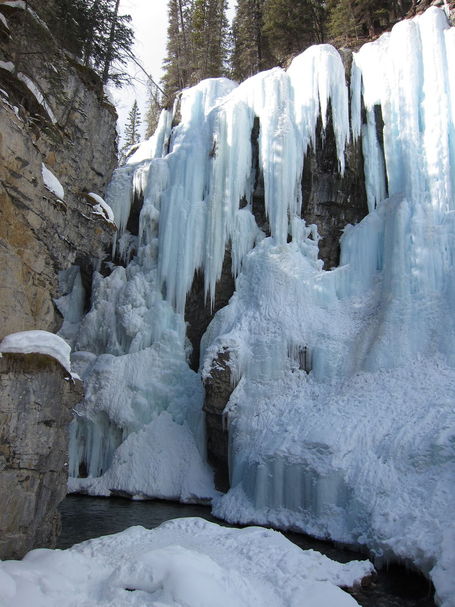 The above photo was at the end of the hike at Upper Falls in Johnston's Canyon. I can't begin to tell you how this photo doesn't do the scene justice. The blues and greens of the frozen waterfall were incredible. I called this "Candylands version of Marshmallow Falls." The hike was worth every step, bruise, slip and fall. Well, I suppose it was, I can't really speak for their bruised asses. 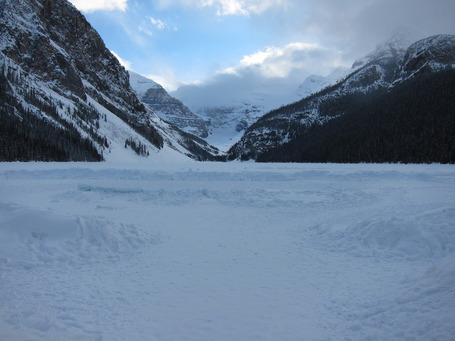 This is beautiful (frozen) Lake Louise. Any Ducks fan has heard the commercials for Banff National Park a million times, "Count the stars over Lake Louise! (::cheers:: YAY!!!!)". The lake was frozen as you can see, but still an amazing sight. 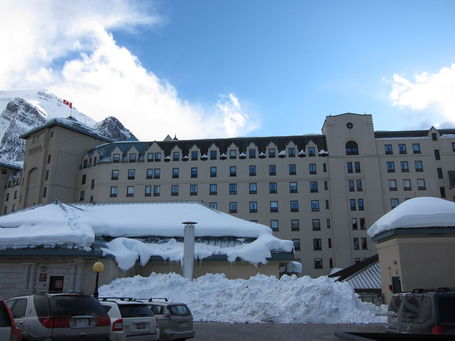 Here at the Fairmont Hotel at Lake Louise we had dinner, MANY drinks and made a great observation about Canadians. They are, first and foremost, Canadian. This was obvious by the many flags and signs we spotted in each city boasting their pride for their country. It's something I don't think we see as much of here in the United States. Upon leaving the hotel we spotted a car with a personalized plate boasting, "IMKANADN". My uncle kindly added the "eh!"

This was our view from the game. Normally I tell people it looks further than it does, but that would be a lie this time. It was far. In fact, at the top of the photo you can see two "0"s which are located on the BACK SIDE of the press boxes. We were located on the Press Level. We could have been in Edmonton we were so far away, but the overhead view was actually kind of cool.

Calgary was very generous to their fans. They gave entire rows of fans jerseys, some were even signed by Jarome Iginla. They also gave everyone in attendance gift cards with surprise amounts on them. All three of ours had $10 and it paid for our drinks! 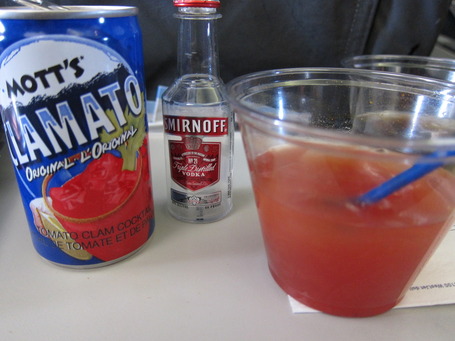 Which reminds me. Canada's most popular drink is the Cesar. It's just like a Bloody Mary only it's made with Clamato juice. It's now my favorite drink as I consumed MANY on this trip! [Ed. Note: That sounds disgusting.]

The next time I do this trip I have so many other stops in mind...and most of them include bars. HAHA! Ultimately, Canada was gorgeous, the people were super friendly and I can't wait to get back.