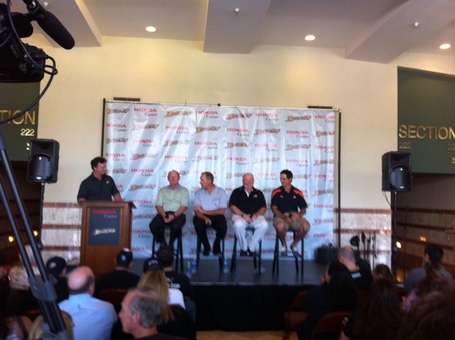 Yesterday was the Ducks' annual Select-A-Seat Event. Essentially it's an open house, where season ticket holders can roam around to decide if they want to upgrade or add seats, before it is open to the general public. More importantly, the event includes a Q & A session with members of the Ducks' staff. This year the panel was hosted by Brian Hayward, with GM Bob Murray, VP and COO of the Ducks /CEO of Honda Center Tim Ryan, Head Coach Bruce Boudreau, and a player. Luca Sbisa was at the session I attended, and Ryan Getzlaf participated earlier in the day.

Here are some of the highlights from the 1:30 pm panel:

Before I realized I could record the audio with my phone for direct quotes, Murray mentioned that it is basically business as usual with Teemu Selanne. He's begun training, and he can't run anymore, so he's started cycling and somebody made a joke that Sbisa should show teach him how, or at least to wear a helmet.

"I have told Jason Blake and Nik Hagman that they will not be back. I hope them very well. They played very hard and very well for us, the problem being that [...] in trying to get faster we got smaller and we got pushed around. I want to get back to being bigger again. So, we're going to attempt to replace those guys with bigger men, and that's not their fault it's just something that happened here, no criticism to those players, I wish them well."

"George wants to play all the time and wants to play every night, every hockey player wants that. We have some things we have to do here where that may not be possible. So George is going to have a decision to make here in the next little while, it's just [...] we want to become a four line hockey team, and in order to become a four line team some players can't play every night."

My initial interpretation of those comments was that he wanted to lump Parros in with Blake and Hagman, but didn't want to come out and say it directly since he is such a fan favorite. Then, he added that "George expects some interest" so maybe he just means that he'll test the market to see if he can get some more playing time and/or money and if not he'll be back.

Murray also said that it's the same story with Sheldon Brookbank (aka Brookie) but explicitly stated that he has offered Brookbank a contract and he may be looking to move somewhere that he'll have a better chance of playing more often.

"We've been chasing goaltenders around here for a couple of years now due to injuries as you well know. Every year somebody gets hurt. Jonas has had his struggles, and then Dan Ellis. This year we went out and signed Viktor Fasth: A Swedish goaltender, he's not a kid, he's 27 years old, played on the world championship teams with Sweden the last couple of years. We've signed him he's coming in, he'll be our backup probably and then we have Jeff Deslauriers who's also on a contract so we have depth in goal again and that's a huge thing."

Murray on whether or not Emerson Etem can make the team this year:

"I got asked this question a couple years ago about Cam Fowler and I said 'There's no bloody way!' so, you're asking the wrong guy. Emerson obviously is a very talented young man. He's a professional already, as I've said before today, he scored 60 goals in Medicine Hat last year ... whatever.

"The most impressive thing that he did last year is when he went to Syracuse at the end of the year and played in the playoffs which is not easy [...] He got better by the shift, not by the game. So he has an opportunity to make the hockey team, but the same as Ryan Getzlaf, the same as Corey Perry, the same as Bobby Ryan if he's not playing meaningful minutes here, and Bruce will be told this, he will not stay."

Next Tim Ryan discussed some of the upgrades to the building. As an interesting side note, I'm pretty sure he got a bigger ovation from the crowd than Murray did, awkward but telling.

The Grand Terrace project on the South side of the building will have a new restaurant and a super sized team store. In the team store they're adding an in house line of clothing, a clothing line for women, and one for children, and they'll carry more merchandise of the other 29 teams. One upgrade that he didn't mention but was on display is new glass railings for the 400 sections to reduce obstructed views as pictured below. 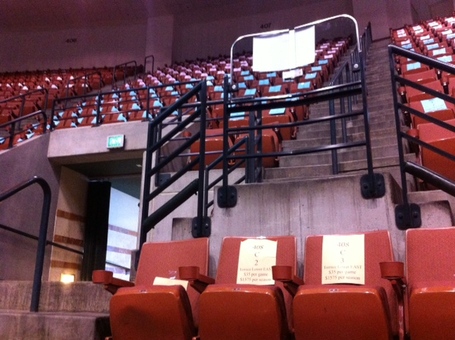 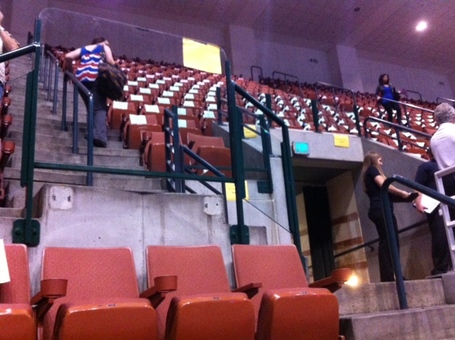 Then it was Boudreau's turn. This was one of the big differences from last year's event. For starters Randy Carlyle wasn't there last year, but more to the point, Bruce gave the panel some character. He gave his take on the Kings/Devils series and when the boos came after Hazy mentioned that he once worked for the Kings' AHL affiliate in Manchester he lightened the mood by saying "They fired me, you think I like them?"

He was very gracious to take pictures, sign autographs and talk hockey between the sessions. He gave my three-month-old son a little "coochy-coo" tickle under the chin and even admitted that his favorite show is Storage Wars.

He also got a huge laugh later on during the fan questions when somebody asked about getting a big, physical defenseman and he silently motioned toward Sbisa. Who quipped that he plans to put on a few pounds over the summer but, isn't going to get that much bigger.

Sbisa also talked about how great it was to play in the Worlds, and that he could have played better, but it was fun, especially to play against Ryan Getzlaf and Corey Perry. Then it was on to the fan questions. It was a much friendlier atmosphere in general, except for when it came to two issues: Justin Schultz and Ryan Getzlaf.

Murray didn't break any news on the Schultz front, but he said that they have had Scott Niedermayer visit him three or four times, Todd Marchant visited him, and he came to a game against the Blackhawks in December. At that time he told Murray and the coaching staff that he couldn't wait to join the team after his season was over in Wisconsin. Murray also mentioned that when he talked to Schultz in December he used the fact that playing 10-15 games at the end of the season would burn a year of his entry level contract as a selling point. I'm not sure if he had an idea something was up then, or if he's just emphasizing that now, or if I'm over analyzing it but I thought that was interesting.

He said that they made Schultz another offer last week and they'll make one more on the June 21st deadline. When I asked him what else they could do to convince Schultz, since they can't offer him any more money, he said, "Put as much pressure on him as we can, have people call him. Scotty called him the other day. It's all we can do. We just hope he's a man of his word and lives up to his word. At day's end you hope his character prevails in this."

I took that comment as a bit of a jab to Schultz, that maybe a GM like David Poile wouldn't take, but the bottom line is, don't hold your breath for any good news on Schultz.

The other touchy subject was a fan's suggestion to remove the C from Getzlaf. Everyone on stage, except Tim Ryan who didn't comment, went into full defense mode. Boudreau wrote it off as one bad season. Hazy and Sbisa downplayed the official role of captain, by pointing to informal leadership from the rest of the team. Sbisa also made note of how "pissed off" Getzy was when the team was terrible early in the season. And Murray brought out the big guns:

"Do you recall what Steve Yzerman was like his first two years after Detroit made him captain?" he asked back to the fan who posed the question. "Sometimes when you take on that leadership role, it screws you up, and you think too much about being a leader instead of just going out and being the leader. We're hoping that Ryan forgets about what he has to be and just goes out and does it and we have to give him time to get that right."

No pressure Getzy, we just expect you to be exactly like Steve Yzerman.

Ed. Note: I reached out to readers on Twitter to ask for someone (in addition to Chris) to take notes on the session they attended yesterday. AC reader Marty Knowles volunteered and was able to grab a few moments one-on-one with Murray, Boudreau and Getzlaf. Here are his notes:

I asked all of the above, "What's the deal with Justin Schultz and are the tampering rumors true?" here's what each said:

Bob Murray: "Justin Schultz will not be an Anaheim Duck, He's informed us that he wishes to explore talks with the 29 other clubs, and that's his right under the current CBA. I cannot comment on the tampering charges at this time but if situations change I will let all of you know."

Ryan Getzlaf: "I've never seen him play or anything but I hear he's pretty good. He better be really good because a lot of players, not just on this team, don't like the way he's handling this situation. We want guys who want to be here and be a part of our team. No one wants to deal with that sh... uh stuff in the locker room." He corrected himself as my 6 year old son approached. Good dad! He also said he's more disappointed that the organization lost a draft pick rather than losing Schultz.

Bruce Boudreau: "I don't know what the heck happened there. We were in Chicago and we still weren't playing great and I talked to the kid straight up and said we could use you right now on the big club. We won't send you to the Crunch, as soon as you're through with Wisconsin we'll get you down there on the ice. The kid looked me right in the eye and said I can't wait coach, it's what I've always wanted. We also told him since we were playing him now it would move him one year closer to making millions of dollars. The kid seemed really excited and it seemed like a done deal when all of a sudden something dramatically changed. Someone got to the kid, it seems. I don't know exactly what happened but there's something fishy in Denmark." (sic)

The last thing I have is a conversation my brother and I had later with Ryan Getzlaf. I asked him if he had any nagging injuries last year because he didn't seem like himself. he chuckled and replied, "No, I was relatively healthy last year but there were a lot of changes in my life and I had a difficult time dealing with them. Soon after my son was born my wife and I realized he wasn't a good sleeper. He would wake up 3 to 4 times every night and it left us exhausted. Plus it was really hard for me to leave him and go on the road. We hired some help so next year should be much less stressful. I also had a hard time with the captaincy. Being a captain is easy when you're winning but when you're losing it's hard to have to explain yourself every night and not take it personally. Bruce likes to talk (everyone laughs) so that will take a little bit of the pressure off next year.