If you asked most Ducks fans what went wrong last season, it’s safe to say that many would cite Anaheim’s atrocious defense. It felt like the Ducks were giving up an early goal in every other game and spending the rest of the time playing catch up. This belief that the defense is so shaky is one of the reasons why losing Justin Schultz stings so much and why most of us believe the Ducks should be targeting a defenseman with their first pick in next week’s entry draft.

Before we begin, a couple caveats: It is inherently difficult to quantify what "offense" and "defense" means in hockey. There are so many factors that affect goal-scoring and goal-prevention that this piece should really be more of a starting point than a definitive conclusion.

To begin, here’s a numerical look at the Ducks’ goals for and goals against in seven seasons since the lockout, as well as the average over that time. Bolded rows represent seasons in which Anaheim made the playoffs.

Last season saw the Ducks record fewer goals than any season since the lockout. While the 231 goals allowed falls in the middle of the dataset (although slightly above the average), Anaheim’s 204 goals for is 13% lower than the average number of goals scored during that same period. In fact, aside from 2007-2008, the Ducks haven’t seen a season with a goal total beneath 238 since the lockout. That’s flat out ugly.

Here’s a graphical look at goal-scoring over those same seasons. 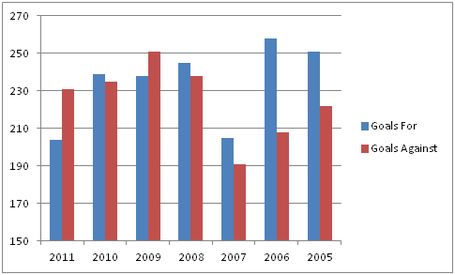 This view reinforces just how historically (at least in a contemporary sense) bad the Ducks’ offense was last season, while also showing goals against to be in-line with, and in some cases better than the preceding three seasons. What is also interesting is the overall shift in goals against from 2007-2008 to 2008-2009. In the first three seasons of the sample, the Ducks gave up no more than 222 goals. The Ducks still had Chris Pronger and Scott Niedermayer in the 2008-2009 season, but goals against still shot up dramatically that year and have remained at a higher level since then. Finally, it seems notable that the overall level of scoring has fallen off from the first two seasons post-lockout. When you’re giving up more goals and scoring less often, you’re obviously going to run into some trouble.

As I said in the caveats though, goals don’t tell the whole story. That’s why I also wanted to take a look at shots for and against. Again, bolded rows represent seasons in which Anaheim made the playoffs. 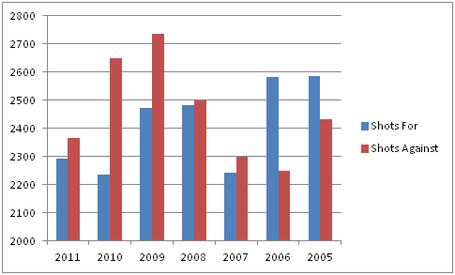 While the Ducks registered more shots last season than they did in 2010-2011, their shots for average last season was still lower than the seven-year average (for the record, it was 5% lower than the average). What’s perhaps more interesting is that shots against were dramatically lower than they have been over the past four seasons. When coupled with the goal data, it certainly seems like the defense pulled their weight last season. The same cannot be said for the offense.

At this point, I don’t think it’s particularly productive to point fingers about who is to blame for the reduced offensive output. Almost everyone finished with significantly fewer goals than their career averages. Part of this might be attributed to the disruptive nature of changing bench bosses mid-season, but the fact of the matter is that our forwards and our defensemen struggled to score. In the context of the league, the Ducks’ offense ranked 24th in goals for and 25th in shots for while coming in at 20th in goals against and 10th (!!!) in shots against.

Was last season a hiccup or an indication of a potentially serious problem? I can’t really say. If I had the time and the resources, I would suggest that each season should be examined in the context of the league to see if there were any larger trends suppressing or stimulating scoring. Regardless, I would suggest that the Ducks look to improve both defensively AND offensively this season. In the context of the draft, the Ducks should probably just take the best player available. Outside of goaltending, this team could use the help in just about any facet of the game.