Today's scrimmage was good, but you could tell that the kids were very tired. They've been at this 'conditioning camp' for a week and it shows. It's not that they weren't trying hard. They were just pooped and making silly mistakes (for the most part). I cannot wait for training camp and it's not just because I miss hockey. Some of the Ducklings have an excellent chance of making the Opening Night roster. I hope what I saw yesterday and today carries on once they play against the big boys.

-- Emerson Etem (LW): Kid doesn't disappoint on Day 2. Every smart chance he got, he shot, and my sweet Jeebus it was beautiful. Having never played hockey myself, I always felt I didn't fully understand what a 'beautiful shot' was. Etem defines that for me. He had two goals total, one of which was stunning. I haven't been able to find video of it yet. He received a pass from Rakell and knowing he's about to be out of position, Emerson gets on one knee and snaps it in net. That's a horrible description of this fantastic goal. He looked like Bobby Ryan on his best game ever. Puck handling was superb. He was hitting people when he didn't have the puck. He was flying around the defenders like they weren't even there. Another thing that impressed me was how much stronger he's gotten. He and Devante Smith-Pelly collided at full speed and Etem stayed upright, pushing DSP back. Last year, that would have left Etem dazed and out of his element.

-- Peter Holland (C): I was pretty disappointed with Holland's performance today. He had a few glimmers of promise, but the rest was surprisingly bad. In my notes, in four different places, I wrote, capitalized, underlined and circled, the word 'TURNOVERS'. He was playing loose with the puck. The opposing player could easily swipe the puck from Holland's stick. Below is my video from today's scrimmage. I tried to focus on Peter Holland as much as possible.

-- Andy Welinski (D): One of the best passers on the ice. Each pass was a rocket right to his teammate's stick. He always made the 'smart pass'. Another thing I liked about him was his ability to join the rush. He reminded me a bit of Lubomir Visnovsky. He's quick, but not small, like Lubo. He need to work on his one-timer, though.

-- Frederik Andersen (G): Poor puck-handling ability outside of his crease. His butterfly needs some work. He was always the most vulnerable at that position. He'd leave a gap in-between his legs that would allow pucks to dribble in through the five-hole.

-- Igor Bobkov (G): He was pretty strong most of the game. The only problem I saw was that when he would face players one-on-one, like on a penalty shot, he wouldn't move - at all. I'm not talking about waiting to react until your opponent does. He straight up did nothing except stay on his feet in the 'ready' position. Because of this tendency, Mat Clark was able to shoot a quick wrister over the shoulder on a penalty shot. Bobkov didn't even flinch.

-- Tim Heed (D): He needs a lot of work. Every time he'd get the puck, he'd throw it in the middle of the ice. Just kind of looked lost out there.

-- Joseph Cramarossa (C): I was disappointed to see that Cramarossa hasn't improved much since we last saw him. During Training Camp and the 2011 Prospect Camp, he was a Corey Perry-esque type of pest with everyone. Perhaps the coaches told him to stop being annoying? I'm not sure. I liked the old Cramarossa better. Below is a video of a penalty shot he took.

-- Hampus Lindholm (D): I won't lie to you, I'm starting to develop a major hockey-crush on this kid. I take back all my 'WTF's' and Ikea jokes from draft day. We are lucky. He is an excellent skater. He skates like Cam Fowler and Scott Niedermayer, but faster. At full speed, he had complete control of the puck. He's fully aware of where everyone is and that allows him to intercept a lot of passes in the defensive zone. If he's protecting his goalie from a screen, he simply overpowers his opponent by shoving him out of the way or laying a really nice open-ice hip check. I really hope that he gets a good look at Training Camp and Bruce is able to talk him out of going back to Sweden for the final year of his contract. Below is a penalty shot taken by Lindholm.

Max Frieberg (C/LW): He's another one that is super fast and has beautiful hands. That's not even the part of the game that I like the most. I LOVE that he hits anything that moves. He would hit guys out of the way to make room for his onrushing teammates. He got into a shoving match with someone after the whistle blew, but I couldn't tell who it was. I like seeing the fire, even in games that don't count for much.

Rickard Rakell (C): Like Holland, I was disappointed with Rakell's play a majority of the game. He looked lost on the ice, for the most part. When he did finally get the puck, he'd skate faster than his brain could keep up and he'd lose the puck. His face-offs were Andrew Cogliano ugly. The best thing to come from him this scrimmage was his chemistry with Emerson Etem when they found themselves on a line combination together. He was always able to find Etem in the open space and vice-versa. Bellow is a video where I tried to focus on Rakell as much as possible.

-- Kevin Roy (C): Yesterday I compared Roy to Andy McDonald and today it was still an appropriate comparison. He is small, but F-A-S-T. Like Andy Mac, he would fly down the center with complete control of the puck. His speed would push the goalie back into the crease, leaving Roy to flip the puck into the corners.

-- Ryan Lasch (RW): His speed yesterday wasn't a fluke. He was just as fast today. His skating style is a perfect hybrid of Saku Koivu and Teemu Selanne. He picks up speed the same way Koivu does by getting low, head down and skating in short fast bursts. When he reaches full speed, he's like Teemu, gliding almost effortlessly around the ice at an unbelievable pace.

-- Devante Smith-Pelly (RW): He was his normal self. The only thing that really stuck out is that he would fly down the ice into the offensive zone, but he was very slow getting back to the defensive zone. It was almost like he completely exhausted himself on the rush. This gave the other team, in effect, a power play for a couple seconds.

This picture isn't clear at all. I was trying to take the picture covertly. I thought it was funny, though. This is Bob Murray up in the annex of Castle Greyskull. He spent the entire scrimmage up here, by himself. He checked his cell phone occasionally, but otherwise he just stood and stared. 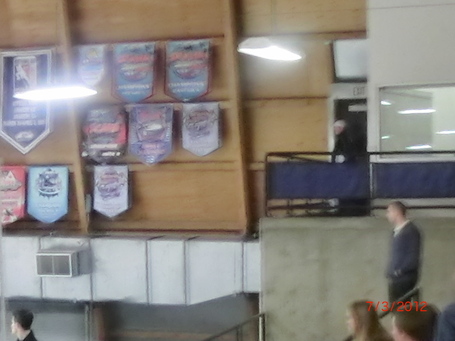