My Name Is Jonas And I've Got A New Mask

Share All sharing options for: My Name Is Jonas And I've Got A New Mask

I'm becoming increasingly annoyed with all the lockout talk. I'm happy that our very own goaltender, Jonas Hiller, could break up the monotony by releasing his new mask for the 2012-2013 season (if/when it starts). It's another extremely creative design. I like it. Let's take a look...

(Biiig 'thank you' to Alec at Airxess for permission to use all photos shown. Make sure you visit his website Airxess for more designs. Give some love to the crew at The Goalie Guild and PadsTracker, too.) 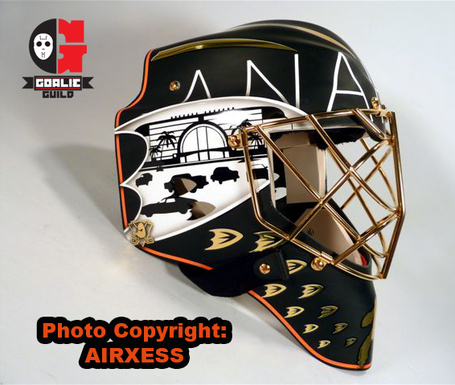 The black mask is outlined in Ducks' orange with a gold cage on the front. As is standard with most Hiller masks, he pays homage to the past by including a Mighty Ducks logo somewhere in the design. This time, the MD logo is placed on a white-ish ombre 'D' that is filled with the front of Honda Center. I love that they added cars. Makes it authentic! 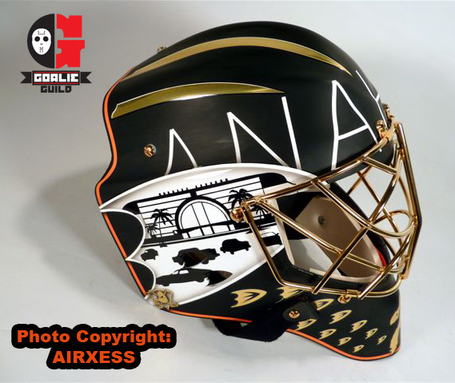 On this overhead, you can see the 'ANAHEIM' that wraps around the front of the mask. Above the letters are gold divots? Plateaus? Spoilers? Whatever they are, they make him a better goalie. Trust me. 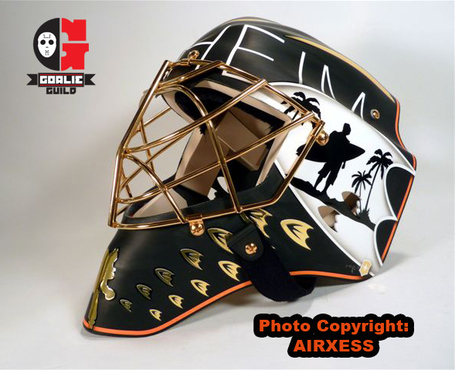 On the opposite side of the mask, he continues with the webbed-D down the sides. There isn't a head-on shot in this group to see the throat area; however, I think I can make out that below the middle of the cage, in the center is a golden Wild Wing. Like the other side, there is another white-ish ombre, but this time it's filled with the beach and a surfer. I think said surfer is, either intentionally or unintentionally, Jonas' silhouette. Look at the hair! 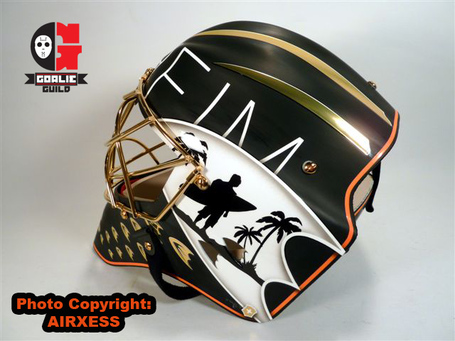 Overhead view of the opposite side. Picture of the beach and the Jonas Hiller-esque surfer. 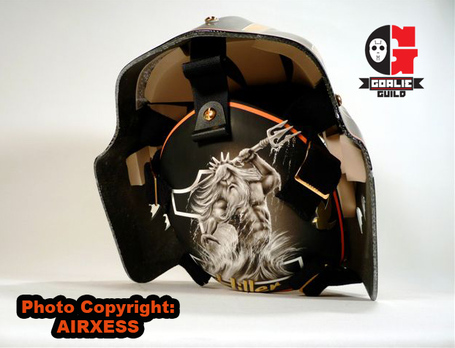 Finally, the back. I think it's funny that he has his name on it. Pretty sure that no one else is going to pick up this mask on accident. The angry fish-man is Poseidon. One key thing to note is that the backplate is one that Hiller wore a majority of last season. He changed it for the Movember mask and ended up switching that part out and back to the original one.