Robby and Chris recap their experiences at the Ducks' Faceoff Fest for season ticket holders.

Last night was the Ducks' annual Faceoff Fest event where season ticket holders are invited to get autographs from their favorite players, skate on the Honda Center ice, tour the arena and have all kinds of hockey related fun. Robby and I attended and here are our thoughts and a few pictures from this year's extravaganza.

We arrived just before five and found a long line waiting to get in. Once we were able to get in, we immediately headed to the line for Teemu Selanne. Even though the players were not scheduled to sign autographs until 6:30, Teemu's line had already begun wrapping back on itself by the time we were able to get in. Luckily, I got a text from Chris that he was about 50% further up in line than we were, and we joined him. 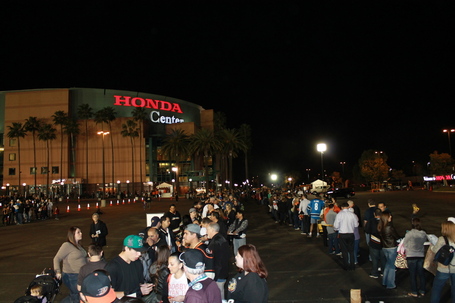 While we waited for things to get going, my wife hit the Garage Sale, which is probably one of the coolest things about Faceoff Fest. The Garage Sale basically consists of the Ducks putting out a bunch of old momentos and equipment from past players that they sell at a discounted price. All proceeds benefit the Ducks foundation. Rebecca managed to snag a Bobby Ryan placard that was signed, as well as a gorgeous, signed canvas print of all the Ducks Olympians from 2010. [Ed. Note: I'm so freaking jealous of that, BTW. -CK] And no, it was not signed by Ryan Whitney. So yay for that.

As Chris and I discussed the woes of the second line and the future fate of the Twins, things finally got underway and we made our way up to the Finnish Flash. As always, Teemu was incredibly amiable and eager to speak to everyone. Teemu was really cool with my son and graciously signed everything we put in front of him. There's a reason people love this man so much.

At that point, Chris and I parted ways and I headed to Bobby's line. After a detour to the Ducks Store with Trevor while Rebecca waited in line (by the way, if you want to have a kid, do it now because the Ducks have way more infant stuff than they did when Trevor was born), we finally made it up to the myth and legend that is my Bobby. Similar to Teemu, Bobby was really friendly with Trevor and he seemed to be genuinely humbled to find that Trev's middle name was Ryan. I told Bobby that we loved him and appreciated everything he did, and that we hoped he would be a Duck for a long time. He looked up when I said that and told me that he hoped he would be, too. Love him or hate him, Bobby is damn good with the fans and always has been 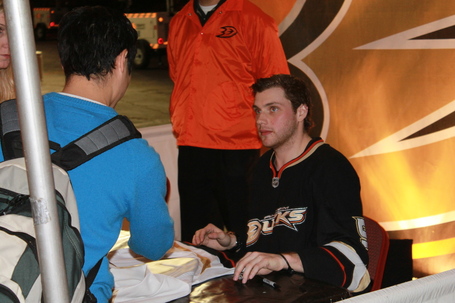 One of the new features at this year's Faceoff Fest was the opportunity to head up to the Press Box. Either this wasn't well communicated or people weren't interested, because it was pretty quiet up when we got up there. But it was also awesome. It was really cool to see some of the classic photos in the press box and the vantage point from up there is truly remarkable. The press information that is available to members of the media, such as fact sheets and other background material, was also cool to peruse. 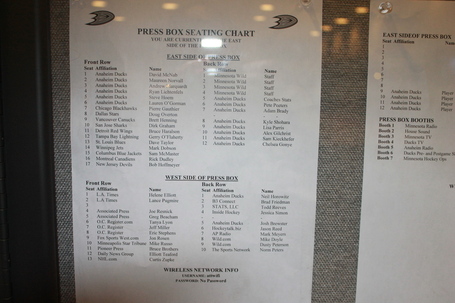 After hitting the Press Box, we headed down to the Club level where several more players were signing. We decided against the line for Winnik and Beauchemin (funny note, the sign for Winnik said "Winnick") and headed down to where Rickard Rakell and Jonas Hiller were signing. Rakell and Hiller were both awesome, and when I told Rakell how impressed I was with his play and that I hoped he would stay, he said that he was also hoping for the same.

It was during our stint in line for Hiller and Rakell that I learned of something really disappointing. All players were supposed to sign autographs between 6:30 and 8:30, but Corey Perry left at 8:00. And he left a full line of people waiting. Now, I've gotten things signed by Perry in the past and I've always felt that he was uncomfortable. But it's bullshit and unacceptable for a key face of the franchise to pull this kind of crap at an event for fans. By the time we ended up leaving, we heard several people that were really disappointed by Perry's decision to take off early. I don't really care if there are mitigating factors or not, but that's not something you do to your fans. I'm pretty disappointed and frankly pissed at him for that.

As we were getting ready to leave, we hit the Hockey Spot just outside of the North Entrance. Trevor had a blast playing (or trying to play) street hockey and also really enjoyed sitting on the zamboni. After snapping some pics, we finally left for the night. 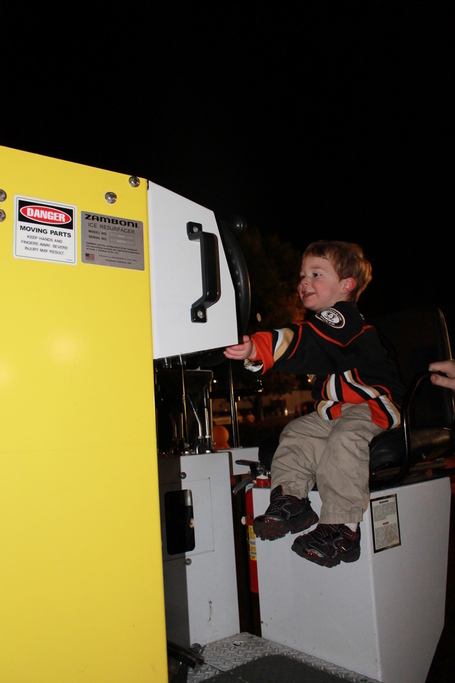 Trevor on the Zamboni

All in all, it was a great Faceoff Fest. The Ducks and their staff should be lauded for organizing the event, which went off without any real hitches.Staff were always friendly and eager to make sure that the kids got to enjoy anything they wanted to. I also give the Ducks a lot o credit for finally offering up more than just hot dogs as free concessions. This year, they had two different vegetarian options, which works well for my wife since she doesn't like pork/beef/mystery meat. So good on the Ducks.

But Corey Perry really let me down. And he let a lot of other fans down. I don't want to read too much into this, but it's definitely not the actions of someone who wants to be here long-term. Not a cool move. At all.

WARNING! If you're not fortunate enough to be a season ticket holder, or have wanted to go to an event like this but have never had the opportunity, you might want to stop reading now, because I'm about to sound like an entitled, jaded, cynical dick.

This is a great event, usually the players are very accommodating and you get opportunities to see things that, as a fan, are normally off limits. However, this is my fourth or fifth time going and I have to say, I'm kind of over it. I've waited in lines to get autographs and ten seconds worth of face time with most of these guys before, I've skated on the ice, I've seen the locker room and the press box. I just wish there was something new.

In fairness, the press box tour was a new and welcome addition. I found it funny that they had game notes from Tuesday vs. the Sharks as a display even though it was in San Jose. The other main differences from years past were that Kent French and Phil Hulett would occasionally break in over the speakers to interview fans about what a great time they were having, and there was a live band set up in the stands, Smashville style, for the pleasure skaters (pictured above). Neither development was particularly exciting. 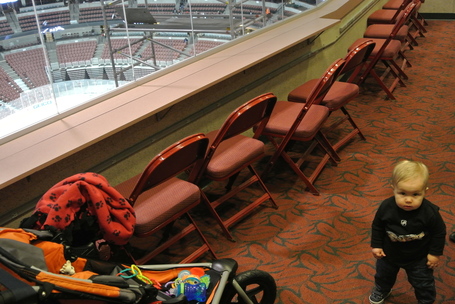 My son, Roger, taking the "No Cheering in the Press Box" rule very seriously.

Having said that, I can't wait for Faceoff Fest to come around next year, or even better, the year after, when my son Roger (11 months old tomorrow) will begin appreciating it. this year for me, it was all about getting one last shot to have Baby Rog's picture taken with Teemu. Technically it was against the rules to pose for a picture, but being the stand-up guy that he is, Teemu bent/broke the rules to try and snap a good picture and sign all of our items.

After that we headed over to get Roger his first ever Kids Club kit, but it took about one minute too long because my wife, Amy, then went up to the coaches area to find Scott Niedermayer (her favorite player of all time) signing his very last autograph of the night. That was a bit of a heart breaker, considering he's the last player (besides Whitney) we needed to sign our Olympic photo, but not nearly as bad as waiting upwards of three hours for Perry to leave early. Yikes!

After that we went down to get Roger's Kids Club Kit signed by Kids Club Captain Francois Beauchemin. As you might expect he was quiet and to the point. Amy asked him to sign the box to Roger and he did exactly that "To Roger, Francois Beaucheimin, #23." Meat and potatoes, just like his game.

As Robby mentioned Winnik was with Beauch, I asked him how he likes being a Duck so far. He said he likes it a lot, and I told him that it shows. One weird thing is that he had some kind of Cosmo Kramer hairdo going on.

We left about the same time Corey Perry did, so we didn't stay for the last event of the night, Chuck-A-Puck, which is where you get a foam puck and throw it from the stands towards targets on the ice for prizes. Not sure if you had to purchase the pucks, but I'm sure if so the money would be for charity. On our way out we stopped by the team store and took a picture with Roger on the Zamboni in the parking lot.

Again, it was kind of just the same old Faceoff Fest, and I think I'll have a whole new perspective on it in the next couple of years. 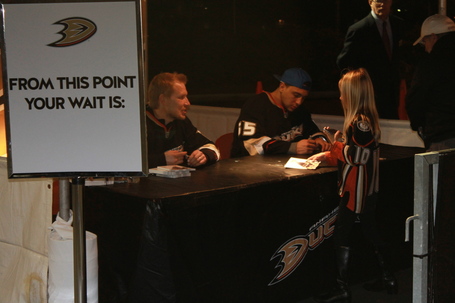