I heard that you're all demanding things, so I thought I'd jump on board.

Share All sharing options for: Make Us Whole Series: I Demand Appeasement!

Since I'm new around here, I thought I'd introduce myself real quick before getting in to all of this. My name is Jer, and I've taken over writing about the Ducks on Battle of California now that Earl Sleek has retired. Don't get too excited though, I can't draw a webcomic worth a damn. And even though that may have never stopped Sleek from drawing them, you won't be seeing any cartoon ducks from me.

I thought I'd type up a quick guest spot here due to recent rumors circulating that Anaheim Calling pays better than Battle of California. Hopefully I'm not wasting my time. [Ed. Note: We pay in hugs, as does BoC, but ours come without communicable diseases - thanks, Rudy!]

So let's jump in, here are my three thoughts on how the league can appease fans for putting us all through this wholly unnecessary lockout... 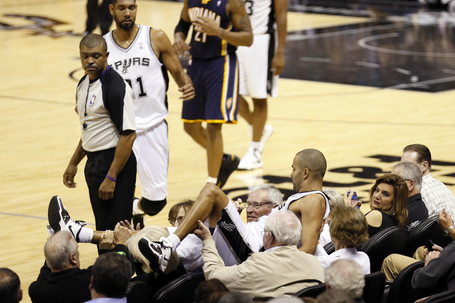 I've never been much of a basketball fan, but one thing that's always really captured my imagination about the sport is how fans are able to sit courtside, just feet away from the action. There's no barrier between the fan and the action, giving spectators more of a sense of being involved in the game itself. I propose the NHL allow for the same; Tear down the plexiglass, extend the ice surface a bit, and bring out the folding chairs! We want to be in the game. What's that you say? "Safety concerns?" This is hockey, friends, just keep your head up.

Item #2) The Shootout Is Merely a Skills Competition You Say?

I've heard a lot of talk from fans, bemoaning the shootout, saying now is a great time to retool the NHL's overtime system in order to do away with, or at least minimize the frequency of, said shootout. The argument goes that the spectacle is a skills competition and skills competitions should not be what decides a professional sport. Well, to hell with that I say! Instead of doing away with the skills competition tiebreaker, let's double down. After 5 minutes of 4-on-4 overtime, if a winner hasn't been declared, the two teams launch a full scale, all-out skills competition. Get ready with that cannon of a slapshot, Zdeno Chara, your shot speed record might be what wins it for the Bruins after OT. Set up the cones and bring out the speed gun, because your team's fastest skater might be what puts this hockey game to bed and sends you home with the W. Anything is better than a tie, right?

Item #3) What happened to my hoodie?

About three years ago, I left my sweatshirt at the Honda Center after a Blues-Ducks game in section 424. It was a great sweatshirt, and I'd like you to return it, no questions asked. I'll forgive you and we can put this whole lockout behind us.

Make Us Whole Series: Here are our lists of demands, NHL & Ducks