Share All sharing options for: Pizzametrics, Week 2: Fowler, Penner, and A Cycle

Welcome again to Pizzametrics. Each week, after recording and pouring over the games played, I’ll be applying my "complex" system of metaphorical metrics to members of the Anaheim Ducks, calling out the best eaters and delivery guys on the squad on an individual game or group of games basis. Because this is a "stat," I have created a one slice (1P-Met) to six slice (6P-Met) rating system, with six slices of pizza being excellent.

This is week two of the young 2013-14 NHL season. Through week two, only four games have been played. That’s still not very many games, not really enough to start getting too excited or fretting over specific guys. But we’re seeing some good things, and we can start from there.

1. this team’s strong area is speed, especially in transition. It is backing off forecheckers and defenders and is quite exciting to watch.

2. I had a delicious slice of sausage and pepperoni pizza from Costco, of all places. I’m torn about pizza from Costco. On the one hand, it feels evil, vile, and wrong to enjoy it; on the other hand, after shopping for any length of time, it can be the tastiest morsel of food ever eaten. This is worth discussing.

Cam Fowler, D (6P-Met) – I didn’t expect to be handing out six-slice ratings right away, but Cam’s actually been…well, stellar. He’s been Anaheim’s best and most consistent player through the four games covered here.

First, he’s leading the team in minutes played. Against the Jets, he played 23 minutes, and against the Rangers he played 22 minutes. Unlike the Carlyle system of overloading two defensemen with massive minutes, Boudreau tends to level his defense playing time. Nonetheless, Cam has been playing the most of anyone on the roster.

Second, he’s driving so much offense. So much. He’s diving deep into the pizza. I can’t stress how awesome this is. "Oh yeah but his defense is still" bap bap bap, shush. He’s eating so much pizza, he isn’t giving himself or his team any time to be exposed by gastrointestinal issues because he’s pounding celebratory booze in the back before anyone knows. Ok, this metaphor got away from me. LEAVING IT.

Through four games, and despite some unlucky goals against in Colorado, he’s been on a pizza buffet of awesome. And this is all without really putting up points. It’s slick stuff like this.

Here are some stills. 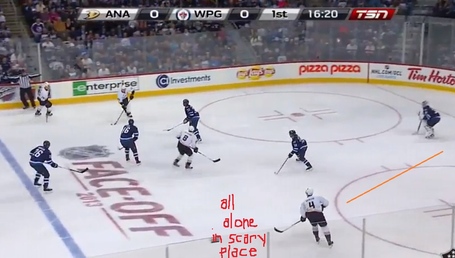 He’s in space, he’s joined the rush, and if Perry hits him, he’s got a wide open net with an orange line leading right to it. Perry drops it back, so ok, no-go. No big deal, he’ll just turn on a dime and head back to his defensive position. 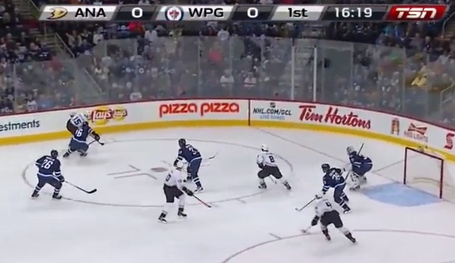 OH BUT WHAT’S THIS!? He ends up with the puck on his way back to the blue line. So he does this. 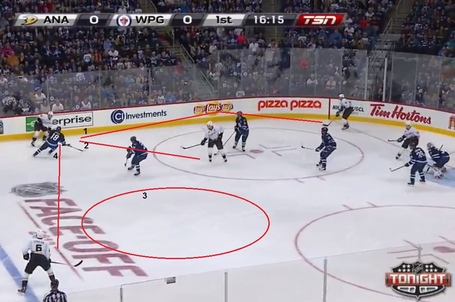 Bryan Little is pressuring Cam from the moment he takes the puck going backward. Ryan Getzlaf moves off the side board toward the middle, Teemu Selanne sets up in the corner, and Corey Perry goes to the net. A "classic" cycle calls for a corner dump or pass to Selanne (who isn’t strong against the boards) or a direct pass to Getzlaf cutting into the middle, if the pass is available.

This doesn’t happen because Cam commits to holding the zone by backing off his retreat and cutting toward the boards. His forehand is board-side, which means he’d have to turn into a dump or pass (options #1 and #2) – that would delay the pass, and Little is all over him. Another option (#3) is to chip the puck into the middle and hope for the best.

Instead, he does what he was advertised as being able to do: he makes a HIGHLY skilled pass (#4) between the skates and stick of Little over to the WIDE OPEN Lovejoy, who has a free slapshot from the point – and that play is a Getzlaf redirect away from going in. 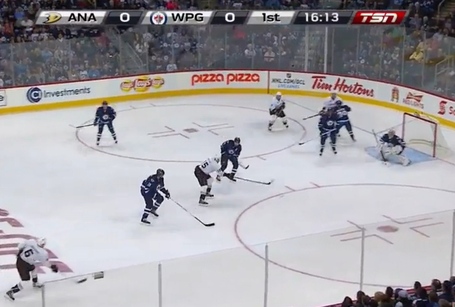 I, uh, like this. I wouldn’t want to see a lesser skilled guy like a Luca Sbisa try it – with him, I want to see him dump it away and get back into position. But Cam Fowler earns good money to be THIS kind of player, and here, he was.

Dustin Penner, LW (3P-Met) – Pancake Penner earned his top slotting against New York with some decent-to-strong play in Minnesota and Winnipeg. Putting up points on very limited amounts of ice time tends to yield to favorable judgment from coaches.

Overall, Penner has been pretty much what many of us thought he’d be. He’s right in the middle. He’s an effective big body who has put up a few points but is not someone who is playing in all situations or playing huge minutes. His points earn him a three-slicer here, but his game has tons of room for improvement before he’s dining at the big-boy table with Cam.

I’m going to highlight a positive play I hope to see more of from Penner (and the top line) below, but I’ll leave a couple of his points here for peeps to appreciate. Pens doesn’t drive play so much as continue play.

This is Penner keeping play alive on Mathieu Perreault's goal in Winnipeg.

This is Penner scoring a gimme from Perry, but note his persistence on gaining the puck. Granted, he no-looked a pass, but I'll forgive him this one time.

I still intend to go with a third guy here in future weeks, but four games through two weeks isn’t a ton to work with. More to come.

THE TOPPINGS (A Thought to End On):

This is an effective offensive zone cycle. This is what we want to see way more of. Going back to what I had said in the summer: the zone-wide dump-in cycle is highly ineffective and inefficient. But the following example is puck possession and grinding play combined to be awesome. And eventually it’ll work for goals.

Ben Lovejoy makes a risk-free pinch – no pressure, the only failing will be if he bobbles it. Getzlaf is positioned in the middle of the ice, ready to backcheck, hold the zone, or receive a pass. 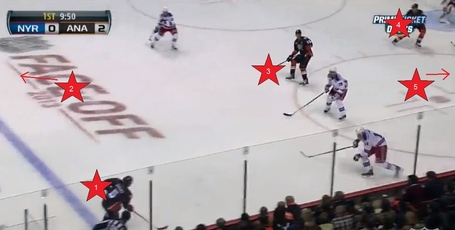 Lovejoy spots Perry peeling away from his farside and sends him a pass along the boards. Perry cycles low, receives the pass, goes right, looks left and passes to Getzlaf. The puck bobbles, the captain moves high to settle it, and Penner is driving the net. (This cannot be overlooked – a system with a player who goes to the net consistently creates a sort of synergy teammates can rely on. His linemates know where he’ll be and know where to find him.) 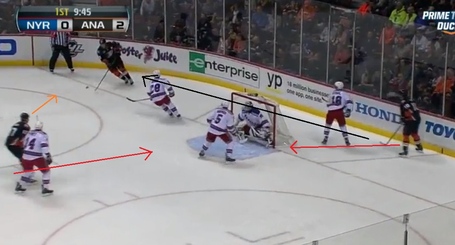 If Getz settles it, he’s getting it right into the slot to Penner. That’s brilliant, how it is drawn up. In this scenario, Perry would rush to the far post to handle any rebounds – basically, everyone follows the red arrows.

But Getzlaf doesn’t settle it yet. So Penner peels back and stays close for a give-and-go. Once Getz gets it [Ed. Note: He GETZ it... eh? eh? Okay I'll leave now.- Kyle], he stays because he’s unobstructed, receives the pass, and gets off a shot. 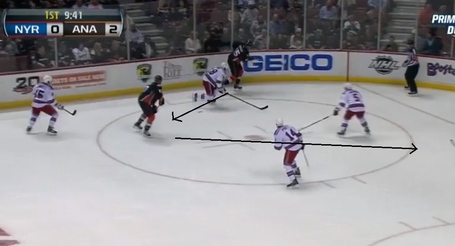 Perry should be on his farside post there, but it looks like he’s recovering from a hit or slash behind the play. (Chances are, he stayed behind the net when Getzlaf couldn’t settle the puck – to remain as a pass option – and thus started back out after a delay.) But if he was in position, that rebound kicks right out to him – and he’s got a wide-open net.

Also check out the Rangers. They are overloaded on one side of the ice because the cycle takes place there and not spread out across the whole zone (the Carlyle method). This is how Lovejoy ends up gathering the rebound without any challenge to continue the play.

This cycle play didn’t work. But you know what it did? It resulted in a shot on goal. It resulted in a scoring chance. It came from a good system being employed. And a system can be taught and practiced and achieved in game until it does work.