The Ducks play their first game of an eight game road trip in the Eastern Conference. This will be the first matchup against Randy Carlyle since he was fired by Anaheim in 2011 (Ooooooooo Drama ... don't expect Patrick Roy 2.0).

Share All sharing options for: Ducks/Leafs Preview: The Journey Begins

The Ducks (7-1-0) will meet up with some familiar faces (Randy Carlyle, Joffrey Lupul, Jake Gardiner, and Troy Bodie) in Toronto to start out the longest road trip of the season. The Maple Leafs (6-3-0) have lost their last two games, allowing three goals against in each contest.

Keys to the Game: The Ducks will need to jump on the Leafs early to try to neutralize the home crowd's energy. After the best start in franchise history, look for the Ducks to take the momentum of a five game home sweep on the road. They currently hold the longest win streak of the young season and have the opportunity to extend it to eight games. [Ed. Note: Doing so would also set a franchise record for longest win streak. - Kyle]

The Ducks battled back in a physical (read: VIOLENT) game against Dallas, showing the fight that earned them so many come-from-behind wins last season. The key on the road will be to refrain from getting behind in games, and Anaheim can't risk giving up the early goal. To start this road trip right, the Ducks will need to be defensively sound.

I expect the power play to continue to improve while the penalty killers (Emerson "shorty" Etem) keep doing what they're doing. Watch for Cam Fowler to continue playing huge minutes for the team — both defensively and on the power play.

What Can We Learn From This Game: Can the Ducks continue their hot streak on the road? Since the loss to Colorado to start the season, it's been a ride of happiness and nostalgia. We'll see if the Ducks can adapt their strong play to their road game. The Ducks will be missing Dustin Penner who might catch up with the team later in the trip after being evaluated.

We should expect to see Jonas Hiller return to the crease after being pulled in the first period of the Dallas game. If Fasth remains out we might just see Frederik Andersen get his first NHL start. Andersen played a great game in relief of Hiller, going two periods without allowing a goal against on 24 shots.

The Leafs are a team aiming to prove that last year's playoff appearance wasn't just a fluke, so Ducks fans shouldn't write this team off. Expect a close game between two teams boasting talented young defensemen.

Fearless Prediction: The Ducks extend their win streak but still get ranked out of the top five in NHL.com power rankings (Oh wait ... that already happened). Well, the Ducks win and Randy Carlyle leaves the rink looking like this: 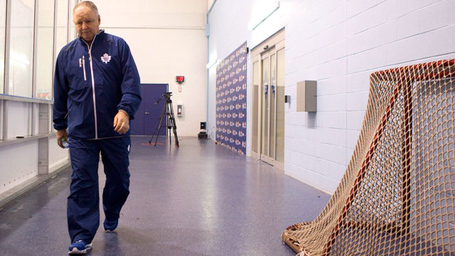 Winners In Manhattan: Ducks Down Rangers 2-1