Welcome again to Pizzametrics. Each week, after recording and pouring over the games played, I’ll be applying my "complex" system of metaphorical metrics to members of the Anaheim Ducks, calling out the best eaters and delivery guys on the squad on an individual game or group of games basis. Because this is a "stat," I have created a one slice (1P-Met) to six slice (6P-Met) rating system, with six slices of pizza being excellent.

The third week of the season has come and gone, and in it there were three games to contemplate. Cam Fowler and Dustin Penner continue to be defensive zone puck repulsors when on the ice. Mathieu Perreault and Jakob Silfverberg have also continued to play strong overall, despite some weaker games individually.

Let’s see some other names now.

Ben Lovejoy, D (5P-Met) – He’s been a sneaky positive possession guy so far this year. Some of that is his primary pairing minutes with Fowler, who has been outstanding. But he’s also been a fairly steady player despite his partner. He doesn’t risk too much positionally, and what he lacks in offensive awareness he makes up in not allowing offense against. He’s a solid defender without being the best defender. It’s pretty nifty.

Now, one thing I’ve noticed through three weeks: Boudreau likes Fowler-Lovejoy out there with Getzlaf-Perry and usually through the ensuing change. With how Getzlaf and Perry have been rolling, it is no wonder Fowler and Lovejoy come out with positive numbers. Conversely, maybe Getzlaf and Perry are rolling because they’re getting functional, possession-driving play from the back. A good discussion could be had either way.

The combo of speed on the back with the heavy bodies (and Getz’s improved defensive awareness) up front is working.

Cogliano is an interesting player. He isn’t a typical checking guy, but he’s found a home in Anaheim in a mostly checking role. He and one of Winnik and Koivu are generally strong against the opposition. And that’s played out this year: when the score is tied or close, Cogliano, along with his mates, is fantastic at driving possession

What impressed me in week three specifically was his speedy forecheck and the panic it caused against the Ottawa and Calgary defenses. (He was just ok against Phoenix but didn’t really get too many chances to use his speed to generate too much.) Against Ottawa, he had probably three or four solid breakaway opportunities. In today’s NHL, that’s a lot. He just needs to work on finishing.

Sami Vatanen, D (2P-Met) – While I’ve enjoyed watching him play, he’s struggled a bit. He doesn’t drive play as much as the rest of his defense corps. Some might think this is due to Bryan Allen, but Allen’s numbers are somewhat better. Vatanen comes out worst of the two.

But he grabbed my attention to begin the week with his play against Ottawa. He looked pretty steady in the game, and most importantly for this blue line, he played pretty big. He didn’t shy away from contact, and although he was (and continues to be) out against more chances against than for, he’s not sinking under the pressure with repeated bad decisions.

Some of his poorer numbers might come from being tethered to a guy like Allen. As a third pairing, likely against the weakest competition other teams offer, I’m less concerned about him than someone like Fowler or Beauchemin, who play bigger minutes. He should be better against weaker competition though. I also want to see improvement in his underlying numbers, his defensive play, and his decision-making on the ice.

I wanted to isolate the goals against in week three. There weren’t that many. One was a short-handed breakaway because Palmieri is terrible up high on the PP. I mean, look at him here: 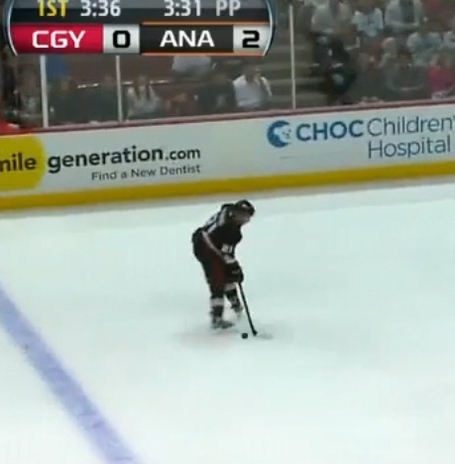 He’s trying to play the puck without having corralled it. The puck was on edge. He should work on this one.

Anyway, here are the goals against. In nearly every case but the breakaway, there's at least one break down in the defensive zone that allows the opposition the chance. You can kinda tell the moment I lost the handle after eating a six-slicer myself...

This play breaks down once the puck comes back in from the point. Winnik pursues a bit aggressively, Koivu cycles to the puck carrier along the board. Lovejoy and Allen don’t communicate roles well once they recognize Koivu’s pursuit. Allen assumes the guy behind him will be picked up by Lovejoy, but Allen doesn’t really make any move to indicate a release on the slot to Lovejoy. 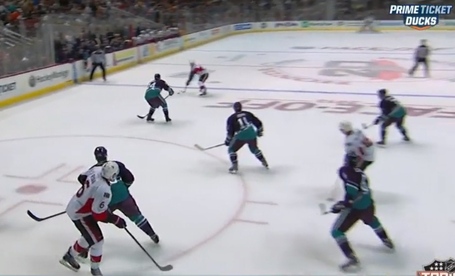 Allen is caught in the deep end here: he’s not close enough to the net but he’s not helping with the slot either. Lovejoy stays with his guy because Allen certainly isn’t pinching near. 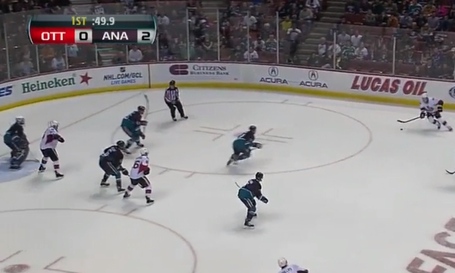 The pass gets through because Lovejoy, while maybe not covering the right guy, is covering his guy perfect – there’s no stick available in the slot. Allen and Lovejoy should have helped each other out here a little better.

This play breaks down in a couple places. Koivu and Lovejoy had a prime chance to clear, but the man Winnik gives a love tap to breaks it up, causing the puck to roll. Instead of coming back toward the puck, Winnik waves at it with his twig, letting Calgary get clear control. 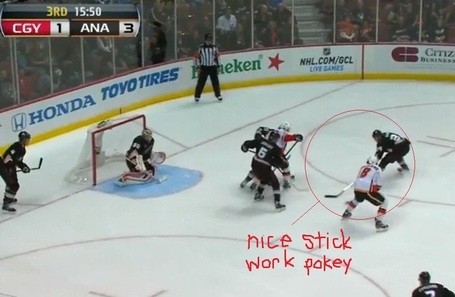 They have a chance to turn this away still when the puck reaches the point. Cogliano’s pressure is perfect, and the wrister going into the slot should have bounced out or gone wide except Fowler came down with the case of puck gazing and didn’t stay on his man. 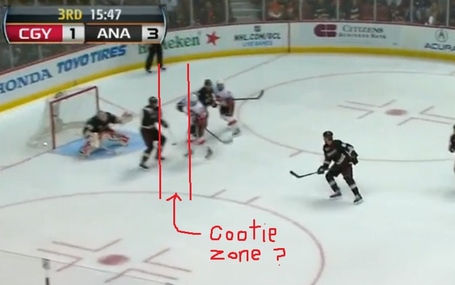 Jiri Hudler’s stick should have never been free for deflection. Very soft defending by Fowler.

I’m willing to forgive this one a lot more because it is at the end of the PK. Except…well, the chance to mark this dude coming through the slot. 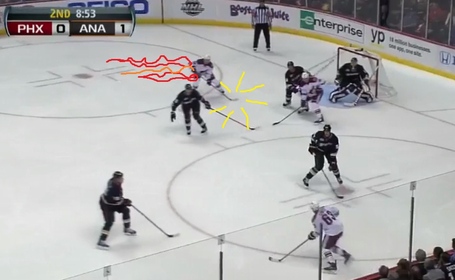 Perry focusing on the point man even with Getzlaf coming back and a returning-from-box Vatanen flying into the zone is somewhat forgivable except for that dude wide open behind you. Plus, look at Allen swimming.

Granted, these guys are tired at this stage. But man…the PK has ended with the puck on the Yotes stick. That generally means a last flurry, and that’s easiest to defend with a simple collapse and smother. The guys are a little too passive and were exploited more easily with solid passing.

A point shot into a deflection is a tough one to defend, but this breakdown is really easy. Vatanen is a defenseman, and he’s pressuring the puck carrier like a forward. He abandoned his defensive positioning. 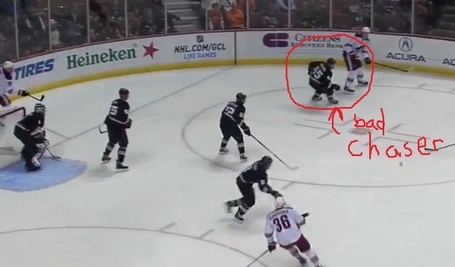 Vatanen rushed at the puck carrier despite seeing a guy peel off behind the net. Bad. Allen can’t defend him and the far side post pressure (which comes the moment the puck gets to the point, because that’s how it’s drawn up), and Vatanen just kind of took off on his own. He was thinking offense way, way too early here.

Winners In Manhattan: Ducks Down Rangers 2-1