An Avalanche Of Crap: Ducks Lose and Coach Roy Loses His S***

Well, the Ducks sucked on the opening night of the 2013-2014 season. Leave it to bat-shit crazy Avalanche coach Patrick Roy to make the night interesting.

Share All sharing options for: An Avalanche Of Crap: Ducks Lose and Coach Roy Loses His S***

Viktor Fasth was tapped as the starter for the opening tilt of the Anaheim Ducks 2013-2014 season. Not surprising considering how poorly Hiller played in the final preseason game.

Little did we know the Ducks would reach their peak performance just 26 seconds into the first when Saku Koivu rang a wrist shot off the post. Koivu was paired up again with Andrew Cogliano and Daniel Winnik; the only consistent line combination going back to last season.

The first glimpse at the Ducks power play came at 4:31 as Paul Stasny tripped up Ryan Getzlaf. Bruce elected to have Getzlaf, Corey Perry, Sami Vatanen, Cam Fowler and Nick Bonino as his numero uno unit. Vatanen quarterbacked the power play but didn't unleash his cannon shot. The closest the Ducks got to scoring was a play between Perry and Teemu Selanne. Perry slid the puck along the top of the crease to a wide open Selanne on the far post. Selanne whiffed on the play.

Play is very tennis match-esque, going back and forth a billion times. Colorado is full of young kids and their speed wore on the Ducks the entire game. (So much for being the best conditioned team eh, Bruce?)

At the 11:45 mark, the Ducks penalty kill took to the ice as Winnik went off for holding. Boudreau sent out Getzlaf, Bonino, Fowler and Francois Beauchemin to defend. Things looked promising as the Ducks were able to keep the Avs from setting up. The best chance for the Avs came when Matt Duchene gets inside on Mark Fistric and his wrist shot is deflected up into the netting.

The first Avalanche goal came at 15:39 when Ryan O'Reilly intercepted a Beauchemin pass to Fowler and shot it right past Fasth. It was a cringeworthy turnover.

Fasth's night peaked when his buddies Getzlaf and Beauchemin both commit turnovers leading to shots. I don't know how he did it but he straight up Neo'd himself making two incredible saves. I have a feeling he was just closing his eyes and flailing but it was pretty damn cool.

The second period started out promising with the Ducks spending the first five minutes in the Avs zone. Just over a minute in, Paul Stasny takes another penalty and the Ducks go back on the power play. This time Boudreau sends out Silfverberg (who is wearing Jason Blake's old #33, I shudder when I see it), Palmieri, Perreault, Selanne and Beauchemin. Right as the power play started, the Ducks should have gone up by two men when Selanne was clearly slashed by an Avs player in front of a linesman. The #1 PP Unit was able to get set up once but nothing came of it.

Winnik picked up his second penalty of the night and Anaheim went back on the PK. O'Reilly is open along the side as he rushes in the Ducks zone. Fowler drops to his knees in front of Fasth but doesn't really do anything to stop O'Reilly's pass to an open Steve Downie (standing behind Beauch, who doesn't even see him) and Downie taps it in. It is now 2-0.

The Ducks begin to do what they always do when they're frustrated, they start chirping and giving people the business to piss the other team off. This is usually counterintuitive to the Ducks mindset. They play worse when they do this. The snowball begins to build as Ben Lovejoy wraps up the stick of 2013 No. 1 draft pick Nate McKinnon. Both guys go off for roughing after exchanging words and shoves.

To start the four-on-four, Boudreau sends out Fowler, Bonino, Getzlaf and Matt Beleskey. Bonino comes off the ice and Vatanen comes on just in time for Colorado's John Mitchell to get past a stationary Getzlaf. This creates a two-on-one situation and Mitchell sends it behind Fasth. Fasth slams his stick against the net. Clearly he's not happy it's now 3-0.

Anaheim nearly scores when Getzlaf swipes the puck from behind the net to an all alone Perry in front of Semyon Varlamov. Perry's wrist shot is quickly absorbed by Varlamov. (Varlamov played the best I've ever seen him play tonight.) As they go to commercial, the camera goes to Perry on the ice, in the same spot he took the shot, where he's on his knees looking upward.

Ducks going on and kill another penalty. Yet with five minutes to go, they look absolutely drained. They're making a ton of neutral zone turnovers. Perry is kind of floating around Teemu-style instead of going to the front of the net. Palmieri replaces Patrick Maroon on the top line in an effort to inject some energy. Aaaand then things go from bad to worse when McKinnon beats Fowler to the puck behind the goal. McKinnon sends a beauty of a pass through the tiny opening between Koivu's skates directly to Jamie McGinn who buries it. Now 4-0.

Patrick Maroon does what he feels is necessary by deciding to tangle to Cody McLeod. Maroon got lucky here in the fact that he didn't get an additional two minutes for clearly pulling his helmet off to fight (new rule). McLeod's helmet had come off early in the scrum in front of the net.

The fight does was it's theoretically supposed to do and Anaheim has a bit more of a jump. Teemu digs in the corner to win a puck (and an elbow to his beautiful face); he skates behind the net and sends a pass to Silfverberg at dead center in front of the net. Varlamov made an incredible blocker save. Period ends with the Ducks still down 4-0. At this point, all I'm hoping for is just one goal.

This period was pretty painful. The Ducks were tired, it was totally obvious. They were playing at the ends of their sticks, reaching and swiping at pucks instead of skating two feet further. This lead to a bunch of turnovers in the neutral zone.

About midway through the period, Boudreau starts to double shift Getzlaf and Perry. That does nothing because Varlamov is playing out of his mind.

Jamie McGinn scores his second goal of the game after he and his Avalanche buddies beat Mark Fistric, Beauch and Selanne and Fasth. Now 5-0.

A funny moment. Vatanen and McGinn start pushing and shoving after a whistle. Vatanen is pocket sized and McGinn, well, is much bigger. McGinn wants to go and he keeps trying to goad Sami into it. Sami skates away and up skates his 6'5" defensive partner Bryan Allen. Allen gives McGinn a 'pick on someone on your own size look' and McGinn skates quickly away.

Now things really, truly go off the rails. Getzlaf takes a penalty that is borderline stupid and borderline diving on Gabriel Landeskog's part. Getz gets his stick in Gabe's midsection. Gabe clamps down on the stick and then dives to the ground. It didn't take long for the Avalanche to make it 6-0. Downie makes a one-touch pass across the front of the crease to Duchene and Duchene easily gets it past Fasth. (I think it's safe to say Jonas Hiller is starting on Saturday.)

It took for-ev-er for the game to end. with about three minutes left, Getzlaf does the captainly (?) thing and decides to fight Downie. Getzlaf isn't exactly the best fighter in the world but he manages to land a couple good shots on his combatant. Once the two are broken up, Getz heads down the tunnel and throws his mouthguard in disgust.

Anaheim manages to make it on the board with 6.4 seconds to go. There is a melee in front of the crease. Nick Bonino goes flying across the top of the crease, everyone starts paying attention to him and they forget about the puck. Silfverberg notices and flips the puck in the net. Sadly, they couldn't score seven more goals in the remaining 6.4 seconds. The Ducks lose game one 6-1.

But wait! There's more! After Silfver's goal, he, Beleskey, Bonino, Fistric and Allen line up and Roy sends out his goons McLeod and Patrick Bordeleau. Right as the puck drops, they go after Beleskey and havoc ensues!

You'll never guess who incited the riot...Corey Perry! Shocking, I know. He's sitting casually on the boards as he chirps at Patrick Roy. Roy starts to turn purple.

Then Bruce comes in to back up his player: 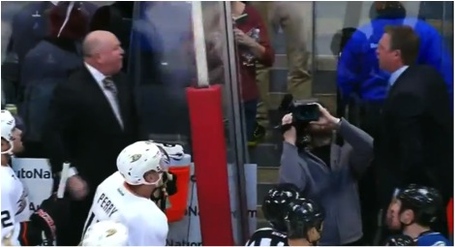 Roy decides to take his anger out on the stanchion: 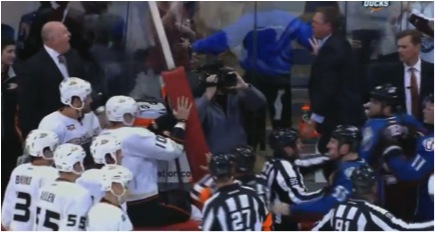 If you'd like to see it in real time, here's the video!

See the best minute of the ducks game. Bruce vs Roy http://t.co/ekkPOoSUiS

The Good: Despite being a minus-2, new guy Mathieu Perreault made a good impression. He was paired up with other new guy Jakob Silfverberg and old guy Teemu Selanne. Perreault started to develop some chemistry with Selanne but the Flash was a bit off tonight. Super highlight of Perreault's game - faceoffs. He was 13-3 for an 80% success rate. Next closest was Nick Bonino at 5-4 for 56%.

The Bad: Patrick Maroon was given a gigantic opportunity tonight to play on the top line with Getzlaf and Perry and he didn't take it. Think about it, Dustin Penner was benched in order to play Maroon in that spot. Granted it is Dustin Penner and he's already being healthy scratched, the point is Maroon just disappeared save one fight. The Twins were much more effective (with a very, very low starting point) when Kyle Palmieri was moved up with them.

The Ugly: Save us Emerson Etem. You're our only hope. All we know is that Etem has a lower body injury. We don't know how bad he's hurt. They miss him. Cogliano was doing his best Etem impression but doesn't have the hands to score the goals.

The Fugly: You know your defense is bad when you kinda wish Luca Sbisa and/or Sheldon Souray are healthy and in the lineup.

3rd Icehole: Corey Perry - aside inciting a riot at the end of the game, he was baaad. Do keep in mind he didn't play in many pre-season games because of injury. He looked lost. I don't know if they're telling him to not play with his ass in front of the goalie anymore or what but he's looking like he did in the playoffs - non-existent.

2nd Icehole: Viktor Fasth - Sure the defense is a ragtag group of 'meh' players but your goalie has to help out, too. He was beaten on the far post many times. The good thing is, this is only game one of 82.

1st Icehole: Francois Beauchemin - I know he's coming back from ACL surgery but his bad play wasn't related to his knee. He had far too many turnovers and defensive mistakes. Knowing Beauch though, he'll probably be a badass against Minny to make up for it.

Ducks Lose Opener 6-1, Patrick Roy is as Crazy as You Remember