The Ducks look to rebound in their first and only game in Minnesota. Can the defense improve and lead the Ducks to victory?

The headline sums it up. The Ducks are in desperate need of a redo after a 6-1 slap in the face courtesy of the Colorado Avalanche. Expect some tweaks to the lineup as the Ducks take on the Minnesota Starbucks Baristas Wild.

Keys to the Game: WIN! WIN! WIN! Forget the last game and move on. The Wild lost their home opener in a shootout to the Los Angeles Kings, and they are going to be looking to rebound in front of their home crowd. The Wild have a much better defense than the last opponent, and the Ducks defenders (and forwards) will need to try to match them.

The sad part about this game will be the lack of Teemu Selanne greatness in the roster (on the only visit to Minnesota on the goodbye tour), as he is sitting out his first game of the season.

Maybe we see the PPG line (Dustin Penner - Ryan Getzlaf - Corey Perry) in action for the first time this regular season. Mathieu Perreault just might be a steal (he was a bright spot in the terrible loss against the Avs). Who knows what crazy line combos Bruce Boudreau will create. To be honest, we could – and hopefully we do – see a completely different team on the ice.

What Can We Learn From This Game?: There are more questions on the Ducks defense than there are Roy joke's on Twitter after this scene. The Ducks defenders are looking for a huge bounce-back game.

Will this be the debut of PPG? What will the team look like without Selanne?Do we have a second line center in Perreault and will he continue to impress? Why doesn't Perry squirt players with his water bottle in every game? These questions need answers, and we might get them in the first game against the Minnesota wild.

Fearless Prediction: Corey Perry shows up to the rink looking like this kid after commandeering Patrick Roy's $10,000 fine and spending it on squirt guns. 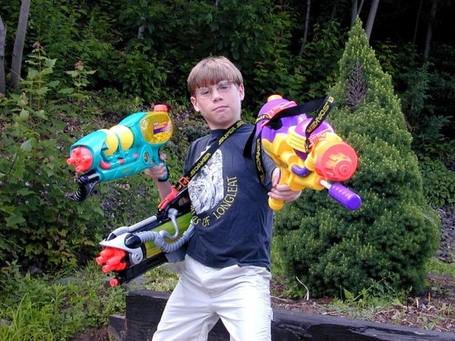