After another perfect home stand, the Ducks head out for their first matchup with the Florida Panthers.

Share All sharing options for: On the Road Again: Ducks @ Panthers Preview

The Anaheim Ducks are now 8-0-0 at home after another amazing home win against the Vancouver Canucks on Sunday. The Florida Panthers are 2-4-3 at home which has prompted this advertisement: 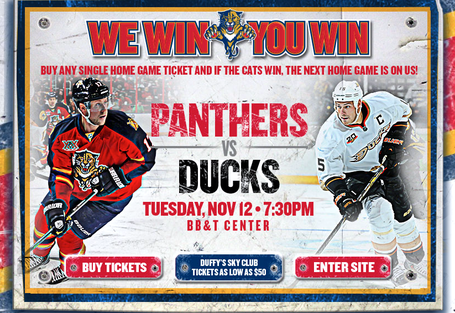 You read that right. IF the Panthers win a home game, fans get the next home game for FREE!!!!

The Panthers are coming off a 4-3 loss to the Rangers in Peter Horachek's second game as interim head coach. Teemu Selanne will be honored on "Finnish Fan Night" during the Ducks' only game at BB&T arena this season.

Keys to the Game: DON'T LOSE TO THE PANTHERS!!!! Florida has lost its last nine games and holds a 3-11-4 record. The Panthers have a few notable players, including last year's Calder Trophy winner Jonathan Huberdeau and rookie Aleksander Barkov. The key for the Ducks will be to shut down the Panthers' young stars while keeping an eye on Florida's leading scorer Tomas Fleischmann.

The Ducks may be missing Ryan Getzlaf in the lineup as there has not been an update on his "upper-body injury" (at least while I'm writing this). Injuries have forced Bruce Boudreau to mix the lines a lot throughout the season. Against Florida, expect to see similar lines as in Sunday's game versus the Canucks, barring the return of Getzlaf.

What Can We Learn From This Game: What will Ducks look like on this road trip? Viktor Fasth is close to returning, and his return could fuel the fire that is the Ducks' goaltending situation with Jonas Hiller and Frederik Andersen.

Aside from goaltending, the Ducks have already had to make choices on defense. Sami Vatanen has been a healthy scratch as Luca Sbisa made his way off the injured reserve list and back into the lineup. With Hampus Lindholm a plus-15 on the season and getting better with every game, the young defenseman will likely remain in the lineup. Bryan Allen has improved from last season. Cam Fowler and Ben Lovejoy are a pairing that cannot be split up. What the Ducks decide to do on defense on this road trip may depend on the teams that they play.

Fearless Prediction: The Ducks loan Teemu Selanne to the Florida Panthers for "Finnish Fan Night" (ONE GAME ONLY) in exchange for the team's 2014 first round pick. Selanne scores a hat trick and Florida still loses the game.