The extra man unit and Ryan Getzlaf each scored four goals in a two-game stretch. This team looks scary good.

Share All sharing options for: Takeaways: A Long-Expected Power Play

[Ed. Note: Written prior to Monday's game in Florida.]

1. Ryan Getzlaf will not make a run at the NHL record for most goals without a hat trick. After digging around the internet for too long, I'm fairly confident that Larry Murphy's 287 goals are the most anybody has ever scored without getting three in the same game at any point in their career. Shane Doan scored over 300 before his first trick, but I'm only considering players who never got one. Getzlaf made it to 161. He now sits third in the league in scoring, one point behind Sidney Crosby and Steven Stamkos, who have 23 apiece. Corey Perry is tied for fourth with 21 points. [Ed. Note: And he'll likely pass Stammer soon as he's out indefinitely with a broken leg. - Kyle]

2. The power play is up and running! In the last week, the Ducks are four for eight with the extra man, which comes out to roughly . . . let me think . . . 50%. As a result, they have climbed into the 26th spot in the league power play rankings, with a season conversion rate of 11.8%. That is still an awful percentage, but it does not mean the Ducks have an awful power play now. If they can continue their success — not at the unsustainable 50% rate of the last week, of course, but somewhere, say, in the low 20%s — they will not end up with a great percentage at the end of the season because of the damage already done, but that doesn't matter. What matters is that they'll be good at it heading into the playoffs.

3. Luca Sbisa hasn't changed much. He's got enough talent to be a good defenseman, but he has a tendency to lose his check in the defensive zone, which cost his team this goal against Vancouver. For the first time in a good long while, I'm not all that upset about this, because Bruce Boudreau doesn't have to rely on Sbisa anymore. The emergence of Hampus Lindholm and Sami Vatanen, as well as the improved play of Bryan Allen, not to mention the eventual return of Sheldon Souray, mean that Sbisa has to improve his game if he wants to stay in the lineup and avoid being traded. And if he doesn't, he will sit.

4. Which brings me to the issue of depth. Including injured players, the Ducks have sixteen NHL quality forwards, nine NHL quality defensemen, and (at least) three NHL quality goalies. This is indisputably a very good thing. Crucify me for applauding Bob Murray if you must, but he's done his job very well recently. If this team doesn't change between now and March 6, my opinion on that matter will probably change. Very few if any other organizations have this many assets that are both desirable and tradeable.

5. Check this graphic out. Plus-minus may be a limited statistic in its ability to assess the contribution of individual players, but it can tell you a lot about how a line or a team has been performing at even strength over the course of a season. You see some mediocre players on that list, but you don't see many mediocre teams. Ottawa is pretty much the only one. 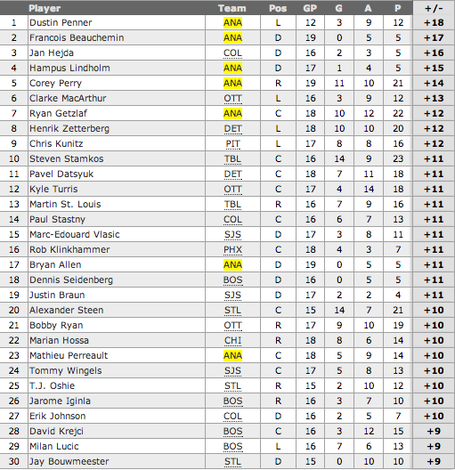 6. Cam Fowler plays more like Nicklas Lidstrom than Scott Niedermayer. (This is a commentary on his style, not his ability. I'm not calling him a surefire Hall of Famer.) When the Ducks first drafted Fowler, he was expected to be more of a Niedermayer type — the best skater on the ice, constantly pushing the play forward, controlling the pace of the game, and jumping into soft spots in the opponents' defense. He tried this for a while, and while the skating ability was there, the success wasn't. Now in his fourth NHL season, Fowler seems to have developed his identity as a defenseman a little differently that was originally predicted. He is more cautious on the rush, but his defensive positioning is second to none on the team, and he is getting his shots through from the point better than any other Duck except perhaps Francois Beauchemin. This change isn't necessarily good or bad. I don't care if he plays like Lidstrom or Niedermayer, as long as which ever he chooses, he does it well. And so far he has.

7. Corey Perry will tie Ruslan Salei for fourth on the Ducks' all time games played list when he suits up for the the 594th time against the Florida Panthers on Tuesday. If Perry and Getzlaf stay healthy, they will both pass Salei, Paul Kariya, and Steve Rucchin on the list, ending up second and third, respectively.