The Anaheim Ducks will face the Buffalo Sabres for the second time in just six days, only this time the teams will clash as the best team in the NHL versus the worst.

Share All sharing options for: Sabres at Ducks Preview: Literally... First vs. Last

Keys to the Game: The Anaheim Ducks beat this Buffalo Sabres team last week when they met back east by a score of 6-2. However that doesn't speak to how rocky the Ducks started that game. That game proved to be only the third time this season that the Buffalo Sabres scored the first goal of the game.

Thankfully the Sabres are garbage and they promptly let the Ducks right back in.

They've shown their defense is terrible. 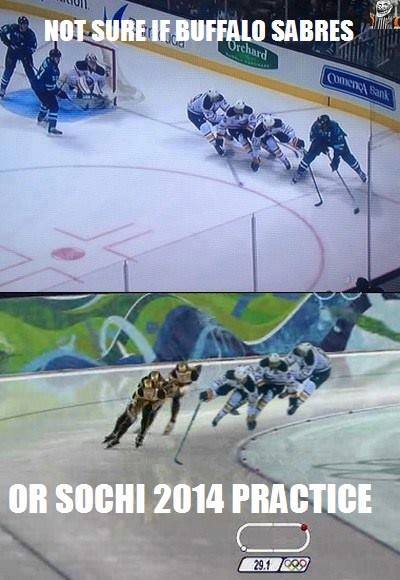 Their offense is lackluster as hell. A guy they acquired just five games ago (Matt Moulson) is currently their second-best scorer.

And they're entering the game on the tail-end of a back-to-back after getting shut out by the Los Angeles Kings last night. So they're tired and they're demoralized even more than they already are for having to live in the winter-hellhole known as Buffalo, New York.

So thus literally the only key to this game for Anaheim is DON'T SCREW THIS UP.

What Can We Learn From this Game: The Ducks are still unbeaten at home after dishing out a hefty butt-whooping on a pretty good Phoenix Coyotes team. They now face a team they should have absolutely zero trouble wiping the ice with.

Thus, there is the serious risk of this game being a humongous trap for Anaheim. The Ducks have a horrible tendency to play down to the level of their opponent when they face matchups like this, thus meaning this could be a big ol' letdown for the Ducks.

Should the Ducks win... business as usual and two more points they should have had anyway.

Should the Ducks lose... I hope their collective stomachs are ready for just how far they're going to freefall down the league's power rankings next Monday.

Fearless Prediction: The San Jose Sharks weep openly while watching this game on TV, realizing that somehow they lost to this team.