We all know Getzy is a big fan of hats, and we all know why, but now he has finally recorded a hat trick in the NHL.

First Period Recap: This first period recap is brought to you by the letters PPG, because the top line of Corey Perry, Dustin Penner and Ryan Getzlaf was on fire, as well as the power play *gasp*.

It started less than 30 seconds into the game with a wraparound attempt by Perry that Ryan Miller got to just in time.  Not exactly a high percentage move and not exactly what you'd expect of Perry in that situation, but a sign of things to come as the Ducks were very direct and simply got the puck to the net all night.

Something that will probably go unnoticed about this game, by others because of the gaudy numbers put up by the top line, was the play of the second line (Teemu Selanne, Mathieu Perreault and Davante Smith-Pelly).  They didn't have any points, but had several good opportunities in the game, and their first shift in particular was a doozy.

It started with Teemu getting those 43-year-old legs moving and carrying into the zone, saucering a nice little backhand pass to Perreault that he redirected just over the net.  Teemu was the first to the puck and got it to Perreault behind the goal who found DSP's stick open right at the top of the crease, but he had a great chance tipped away.  Another won battle on the boards allowed Perreault to set up behind the net for what seemed like an eternity.  He eventually worked the puck to Bryan Allen at the point for a shot that was deflected PERFECTLY on net by DSP in the high slot, but Miller was able to close the five hole quick enough.   Teemu couldn't quite reach the rebound but ANOTHER puck battle won by the Ducks led to Nikita Zadorov boarding Perreault to end the domination.  Hell of a shift!

Fourteen seconds later, that dominant shift paid off when Getzlaf opened the scoring on the resulting power play.  Miller stopped Cam Fowler's point shot, but the puck bounced off his shoulder/chest area (that's a medical term) up in the air and out to the hash marks, where Getzy snuck in and put it right between Miller's legs.

The now red hot Ducks' power play (HA!) got it's other chance midway through the period on a hooking penalty by Cody McCormick.  It was another quick one, as 31 seconds in Cam Fowler took a point shot that deflected off of Henrik Tallinder and into the net, for his second of the season and second in as many games.  I still say that Perry's PPG against Dallas should be credited to Cam, but the league says different.

That's the kind of year it's been for Buffalo, one of the few good defensive plays they made all period (Tallinder tying up Perreault in front of the net) goes horribly wrong, and puts the worst power play in the history of hockey (Note: probably statistically inaccurate) up 2-0.  But it wasn't all bad for the Sabres, they had a full minute of possession later in the period that was littered with Ducks turnovers, and failed clearing attempts which led to their first goal.

McCormick drew two Ducks defenders below the goal line, leaving Mikhail Grigorenko wide open in front.  His first shot was saved, but he scored on the rebound and celebrated wildly.  He gets a pass since it was his second NHL goal and there hasn't been much to celebrate in Buffalo this year.

The revelry was short lived however, as Getzlaf pounced on an awkward bounce off the stanchion to restore the two goal lead about three minutes later and finished off his first career hat trick just before the end of the period.  On his hat trick goal, Penner found Getzlaf wide open in front of the net (a common theme of the night) and he used his long reach to spin and beat Miller to the far post.  Almost like a reverse wraparound.

What's going through Ryan Miller's mind in this picture as he heads off the ice? 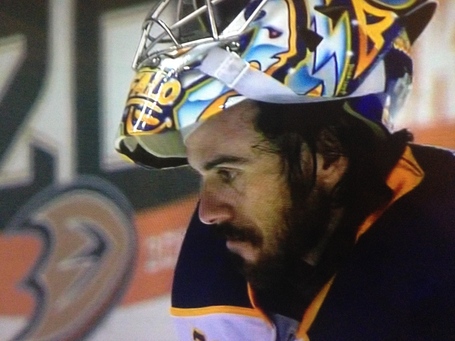 A) What he's going to say to his teammates that do nothing but hang him out to dry all night, every night

B) When/where he's going to be traded

C) How incredibly long the past four years have been

D) Anything to hold back the tears

Second Period Recap: The middle frame started with more domination from the PPG line, and again it looked too easy.  Perry picked up a bad clearance from the Buffalo defense, casually backhanded it toward the net.  It was blocked, but he was the first to the loose puck and walked it to the faceoff dot where he got it on net.  Miller blockered it aside, but right onto the tape of Dustin Penner waiting patiently, wide open at the side of the net.  5-1 Ducks with just over 35 minutes to play.

Through the middle of the period, the second line had a couple of good chances that they couldn't quite finish.  The first was a rush up ice, where Perreault drove the center lane, opening up a cross ice pass from DSP to Teemu for the one timer on the fly.  The second was exactly what DSP is built for, muscling the puck off of a defender in the corner (staying open for a pass from Perreault, in a perfect support position) and taking it right into the crease.

Later in the period, Grigorenko scored his second of the night, on a two-on-one that was created by the rare lazy shift by Daniel Winnik.  At center ice, Winnik got on the wrong side of Corey Tropp.  He slid it over to McCormick, Winnik gave his stick a tap and followed them into the zone in a glide.  Fowler then pressured the puck carrier, assuming that Winnik would be putting back pressure on Tropp, but no dice.  McCormick to Tropp, to Grigorenko, Goal.  Not much Frederik Andersen could do about that one.

About three minutes later, another great chance for the second line.  Perreault rimmed it around to DSP below the goal line, who chipped a backhand pass to Teemu right in front.  Miller made a quick save, and Teemu got hit, but it had no affect on the play.  Seriously, I know finding those soft spots is Teemu's thing, but these Buffalo D-men are just useless.  Speaking of which...

As if it wasn't out of reach before, the Ducks added a sixth goal before the end of the second when Winnik brought the puck off the end boards, to the front of the net, creating a little space for Rickard Rakell.  Rackell received a pass from Winnik and without hesitation spun around, whipping a backhand pass into the perfect spot where Miller couldn't reach it, but the onrushing Andrew Cogliano could.  Soft, soft defending by the Sabres there.

Third Period Recap: Miller was pulled in favor of Jhonas Enroth, and the third was mostly an exercise in running the clock, but the best chances all still came from the Ducks.

One was bad luck, as Teemu got the puck right in the middle of the ice... again... Miller made the save and DSP was there with a wide open net, but could only get the shaft of his stick on the puck in mid air and it went off the post.  We'll never officially know, but I'm pretty sure if it was Ryan Getzlaf at that far post, the puck goes in and there are pants on the ice (see Puck Podcast for reference).

The other was a really strong shift from Rakell that ended up, shockingly, with the puck right in front of the net and it bounced right past a lurking Cogliano.

The Good: All season we've had the power play in the bad and ugly categories, so it's only fair that they lead off the good when they go 2-for-2 as they did tonight.  They're 66.7% in their last two games, but sill only 12.1% on the season.  And of course, the first line was dominant especially in the first period, getting Getzy his first career hat trick.

The Bad: There were a few lulls in the game for the Ducks defensively, most notably the few shifts full of turnovers and poor clearance attempts that led up to the first Buffalo goal.

The Ugly: No surprise, but the Buffalo defense is just terrible, especially without Christain Ehrhoff.  As well as the top line played, they were allowed to do whatever they wanted, whenever they wanted.

4th MVD: Rickard Rakell - Honorable mention to Ricky Raccoon for his first NHL point.
3rd MVD: Devante Smith-Pelly - In the buidling the three stars went to all three members of the top line, and for good reason, but to mix it up I want to give a little love to the second line.  It could probably go to any of the three, but I'll give DSP the edge, for being the biggest surprise performer on the line.
2nd MVD: Dustin Penner - Three assists and one goal of his own, which brings him to three goals on the season (11 GP) surpassing his season total of tow from last year (33 GP).  This conclusively proves that the Ducks are three times better than the Kings.