Some Ducky Musings for you...

I am a product of Orange County. Sun, surf, sand...and hockey? Aw yes...the query that has eluded so many East Coast and Canadian hockey fans….

Share All sharing options for: Some Ducky Musings for you...

The sun's shining and the Ducks are coming off another home win....What a perfect day to introduce myself! My name is Lois and I am so excited to be contributing as a voice of the AC Community. Here are some things you should know about me….

I am pretty confident now that I have discovered my identity as an old-Canadian-man-turned-US-citizen (USA! USA!) in my past life. I can be sarcastic and snarky, while showing honey badger tendencies.

But when it comes down to it, I see myself as a toasted marshmallow….Sometimes burnt and unwelcoming on the outside, but nice, sweet, and fluffy on the inside. :) I think I can be punny at times so I enjoy making what I believe to be witty signs to sometimes hold up during the pre-game warm-ups. I'm sure these may spill over through some posts so I apologize for the corniness beforehand. I grew up a Mighty Ducks fan as a kid and developed into a Anaheim Ducks Die-hard as a semi-adult.

So where did it all begin for this SoCal girl? As much as I hate to admit it, I owe my love for hockey to my younger brother. I used to grumble loudly when my parents would drag me to all his games; but secretly, I couldn't wait to get to watch the puck drop. Sorry to disappoint, but my love for the then-Mighty Ducks of Anaheim did not begin with the Mighty Ducks movie....It began once again with my brother. So I guess I owe him a holler. Holla lil bro. Our first professional sports game was of course a Mighty Ducks game, back in the hailing days of the super duo Paul Kariya and Teemu Selanne.

Selanne and Kariya - The Dynamic Duo (via rafhendrix)

It was something I never experienced before....So beautiful and flawless in execution. Now that I look back on it, I believe it was love at first sight...love of hockey that is. And to put the icing on the oh-so-sweet cake, my brother came home with a game puck thrown by Selanne. As a kid, I couldn't believe how nice this guy was...and the rest is history. Selanne became my favorite athlete, hockey player, superhero, philanthropist, etc, while the Ducks became my favorite team. 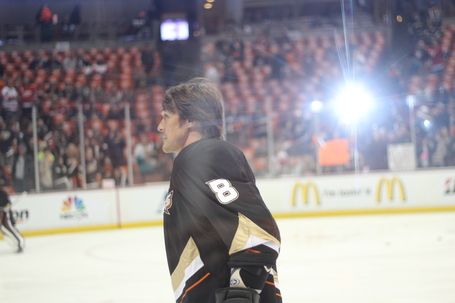 I love hockey for the game. (And no, not for the goodlooking manly men. Not one of those SoCal girls thank you very much. So stop smirking and purge that label of 'fan girl' out of your head.) The speed, the skill, the stats, the grit, the development, the competitive spirit, the tradition, and the 60 minutes of plain badass-ery...doesn't get any better than this.

So my family and so-called-friends think I'm a bit obsessed. (Obsession is a strong word. I like to use FANatic. Just kidding.) Apparently some of them have blocked me from their news feeds. (I know, I'm working on finding new hockey friends.) As a lone season ticket holder, I attend all home games by myself, but I actually love it. I love having conversations and making friends with any hockey-following fan sitting around me. But the best part is that I can feel free to curse, rant, scream at refs, squeal in delight, belt out the Bro Hymn, and just be the crazy, passionate fan that I am since I will most likely never see the people around me again. So HAH HAH. Like I said, honey badger.

I can say with assurance that this game is the best game on the planet, hands down. And this is coming from a girl that has played multiple sports throughout her life. My biggest regret to this day is allowing my basketball schedule prevent me from trying out it out on the rinks. Thank God for the Adult Learn to Play Hockey run by The Rinks. I wish I can say I was a natural, but I think it’ll probably take a couple more spills and whiffs at the puck before I can claim any amount of competency. The good news--I have progressed to slowly stopping on my right side.

Besides hockey stopping, one of my goals in life is to visit every NHL arena. Anaheim, LA, Boston, and Philly checked...now 26 more to go. My passion for the Ducks has followed me wherever I went--whether it be through the shark-infested waters of Berkeley, or studying abroad in the desert of what-the-hell-is-ice-skating Egypt, or flying [V] through the East coast, or just chilling back here in Southern California....It’s fate. I am meant to be here bleeding black and orange...and occasionally jade and eggplant.

Thanks for listening to my musings and I can't wait to share the love, the hate, and all that lies in-between with regards to the Ducks with you all. I'm looking forward to sharing my own views while learning from you all at the same time! Let's Go Ducks!