The Flash is no longer stuck on 678, and the secondary scoring, fickle almost by definition, has resurfaced.

1. Francois Beauchemin and Mathieu Perreault are back. For the thousandth time, it looks like this team may in fact be over the hump in the injury department. This is the part where I knock on wood.

2. The secondary scoring has returned, at least for the time being. That's the thing about secondary scoring. Sometimes it happens, sometimes it doesn't. (Kid Ish wrote a very good piece partly about this sort of thing.) In the last week, it has been happening, and it's made a big difference in all three games. Saku Koivu's line scored the first two Duck goals in the Islanders game, and Cam Fowler scored the third. Alex Grant scored his second NHL goal on his second NHL shot while the Koivu line was out against the Wild. When the Oilers came to town, the latest incarnation of the Nick Bonino line scored, this time with Patrick Maroon and Kyle Palmieri on his wings. And then this finally happened:

The goal was Teemu Selanne's first since October 20 — 19 games without a goal, which ties his longest drought ever from his Colorado days — and the assist was Perreault's second since November 6 — 12 games with only one point. Players like Perreault and Maroon and the the Koivu line guys aren't going to light it up every night, and Selanne is obviously showing his age, so it isn't unacceptable for them to go several games in a row without scoring. But it is important that, on any given night, someone outside of the top line is able to contribute on the scoreboard. And that is exactly what's been happening as of late.

3. Ryan Getzlaf is shooting plenty, but it's not the first time he's done it. He has recorded 83 shots on goal in 32 games this season, good for 2.59 shots per game, which is more than the 2.32 he has averaged throughout his career. It is also the second highest shooting season of his career, proportional to games played. While these numbers suggest that Getzlaf may be a little bit more inclined to shoot than he has been in the past, I'm not sure I buy the idea that he has reinvented his game, as some observers have said. 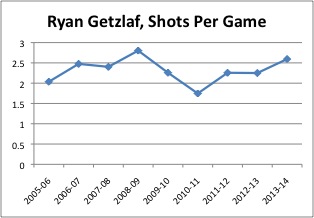 4. Bobby Ryan is going to visit George Parros in Montreal over Christmas break and "spend some time reminiscing about the Anaheim days." That's what he told NHL Network when they interviewed him after Monday's Blues-Senators game.