I might add some cheeseburgermetrics to this pizzametrics flow. My gastrointestinal system loves me!

For those of you following me on Twitter, you've probably seen me tweet or retweet the shot attempt charts compiled at extraskater.com. These charts track all non-blocked shots. Two things to think about with these charts: 1. what team is carrying the play and when, 2. how much work is the goaltender seeing and when. 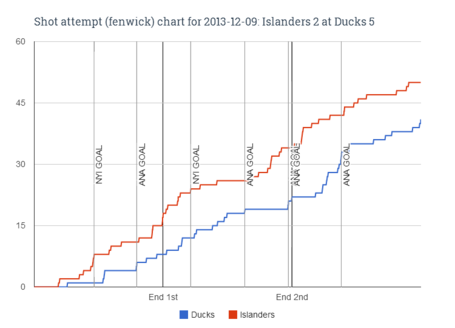 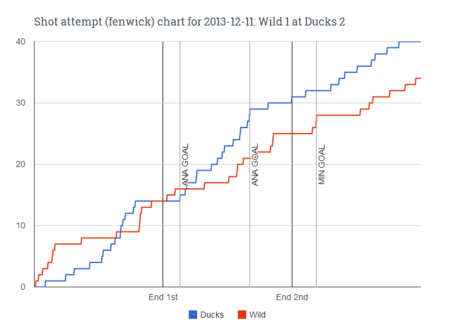 This kid has been sneakily upping his possession play. He's settled down a bit on his pinches and defensive zone play. Strong possession starts from the blue.

Kyle Palmieri, RW (1P-Met) - I put off rating Palmieri in hopes his season would improve, which hasn't happened. I hesitate to hand out one slice of pizza at any pizza party, but the reality is, he's one of the worst possession players in the entire league at the moment - there's just no getting around it.

Popular message board chatter demands better usage for Palmieri. And maybe there's some truth to that. Nick Bonino, his usual centerman, didn't start the year off terribly strong. That certainly doesn't help Palmieri's cause. At the same time, he's wildly inconsistent with his play except in one regard: being on the wrong side of preventing shots against when he's on the ice, much more so than any other forward on the team.

This needs to change. Palmieri has a good shot and has some finishing skill, which means for him to succeed, he needs to be shooting more than defending. I referenced this last week as a concept, but Palmieri is a winger who tends to receive play more than he creates play. That's something only he can change. His defensive zone and transition play are the likely areas of improvement he can work on in order to find himself putting shots on net more often.

Palmieri is still very young in terms of development. He's never played more than 42 games in the NHL in one season; in fact, his NHL total (through last season) is 70 games. Despite the number of seasons in question, that's really not that much experience. Add to it that he's a rush-first player in a system that recently deemphasized stretch plays on the breakout (that benefitted him) and now demands more from wingers (not his strength yet), and maybe it's easy to be more forgiving. He's still developing as a player, and there's still time for it.

Nick Bonino, C (2P-Met) - Bonino has been wildly inconsistent this year. Overall, he's losing the shot attempt battle when on the ice. It'd be nice if he began putting together more solid performances, like in his game against Edmonton, when he was absurdly effective at driving play forward.

Looking at Bonino's pairings, he's been put with one of Emerson Etem or Palmieri in many games this year. Both of those guys are in the red in terms of possession metrics. (A lot of pure scorer type forwards end up with weird numbers like this, suggesting they play better off the rush and not with sustained chances. Sustained pressure chances are the type of scoring needed in the playoffs. That's one reason poor possession teams tend to struggle more in the postseason, when chances tightens up.) Both of those guys are also speed-first guys, which I don't think necessarily fits Bonino's game the best. He tends to play pretty north-south and has always seemed more effective with bangers on his line.

Center is a tough position to play, but strength down the middle is so important. Most clean breakout schemes run through the center position, and depending on that system, the pivot player is the one determining which of his mates will touch his puck more than the other. Bones is basically the lowest possession center on the team right now, which needs to be reversed considering the minutes and roles Boudreau gives him.

I DREAM OF CHEESLECTRIC TOPPINGS

I'm using a quote from Bourne's Thoughts on Thoughts column as a partner to what I discussed last week about off-the-puck play and then to touch on a thought with Matt Beleskey.

24. Kane, by the way, has become the best "zone entry" player in the NHL. What does he ask his linemates to do once he gets into the offensive zone? "One of them has to go to net," he said, then paused. "Actually, I'd prefer both of them go to the net."

Mmm, delicious east-west Kane zone-entries. His linemates are so reliable in what I was talking about above - doing the right, simple things like driving the middle lane, getting to the net and so on - that d-men have to back off and allow him that space. If he played with guys who all wanted to be the high guy for the one-timer, he'd get less clean entries, and be less valuable. The letter of the day today kids is T for Teamwork.

The top paragraph is from Friedman's 30 Thoughts column. The reason I drag this into my post here is because Beleskey is arguably the best utility hockey player on the Ducks roster, and half of you want him benched every game. Bugs me.

Beleskey does literally everything you want to see done in the game of hockey, and he does it on the better side of average. Hockey is this game with hitting and fighting and crashing and banging and like 58 minutes worth of not-scoring action. There's a lot of non-scoring play that has to happen for scoring play to happen. But to read about Beleskey from people on this site, he's a scrub player who sucks and shouldn't even be playing in the league. I see everyone devise fantasy lineups without him in it, as if the team would win more than the winning it already wins. And that's crazy.

Like Cogliano, Beleskey gets as many chances as he does because he plays the game the right way in all zones. You notice the misses because he's not an elite scorer, but the dude keeps getting his chances. What's more, he helps his linemates get chances, and that can't be overlooked. He does this because he does the useful things good enough to make it happen, including playing well with anyone on the roster. This is much harder to accomplish with consistency than many people think.

Like Kane says of his preference when entering the zone, being paired with guys who just play a simple, straight-forward game is so easy. You know where they go, you know what they do. Creative players appreciate that more than playing with other creative players. Look at Sidney Crosby's linemates. Now, there's the whole space creating/management aspect of it that I mentioned about Tim Jackman, but there's also the simplicity of just knowing what to expect and using it well.

Beleskey is a simple but effective player in that way. And to top it off, Beleskey's tough as nails, sticks up for his team, hits the hell out of everything, can play on any line in any situation, and shoots probably the hardest of any forward on this roster after Getzlaf. When he's healthy, I want at least one player like him on my roster every game. I'll find a spot for him, I don't care. What he lacks in finishing he makes up for in literally every other capacity. Winning teams need quality utility hockey players. I can't emphasize this enough.

P.S. playing with guys like Beleskey is way easier than playing with some perimeter-seeking sniper because I knew where they'd be on the ice and where I could send them (or the puck). Likewise, defending against guys like Beleskey is way harder because I couldn't force them outside easily or snake the puck away from them without getting whacked. Combine that with a hard shot, which I didn't particularly like being in front of...yeah, I'll take more of the guy trying to dangle me who I could smoke. They're easier to handle.

In honor of my mentioning 30 Thoughts and Thoughts on Thoughts, I'll do a mini-Thoughts style finisher here.

Midseason trades are silly. It doesn't matter how many young players are down with the Admirals, waiting to crack the roster - they can stay there and play. Those are good minutes, good games. Trading X player to fit Y prospect into the lineup more is not how long-term success in a hard-cap league works. This fanbase has a rabid desire to trade perfectly useful, cheap, and/or controllable assets just so we can root for Etem or Smith-Pelly sooner. Relax. They're fine. Having prospects developing and playing hard to make the roster is good. But aside from that, every team wants to make the same upgrades this one wants to, so the pickings are very slim in any event.

One of the first things I'd ask when playing with a speedy teammate is "can you receive a pass?" All the speed in the world is neutralized if you can't take the puck and do something with it in stride. I'd spend the first bit of pre-game just rocketing passes to guys in stride for two reasons: 1. to get that guy ready to go, 2. to gauge what he could handle (and what I could send). If you watch the premier talents in this game, you see a similarity: they can knock the puck down from anywhere near them and put it in their wheelhouse while skating. Getzlaf, Perry, Crosby, Stamkos, Ovechkin, either Sedin...like, they don't need a perfect pass. Selanne used to do this before age hit. So when I think of guys like Palmieri and Etem improving parts of their game and staying consistent threats with their speed, I think of little fundamental things like this.

Hiller has been pretty damn strong for the team all season. He seems to have eliminated some of the "one soft goal per" problems he had before, and I'm not surprised: Carlyle's system saw a lot of shots get through to the goalie. That's a tiring game to play, even if it upped save percentage arbitrarily. With a more even workload per game, and with a much more active defense around him, I suspect he's been able to think through his game more than just react to it while it happens. I'd forgotten how technically sound Hiller can be when he's not scrambling. He's been more fun to watch this year.

To close with one last Friedman-Bourne bit:

28. Another piece of advice came from his father Dan, who won 125 games in a 13-year, major-league pitching career. "He told me, ‘Make sure you go see your coach and ask him what he wants. You have to know the answer.'"

What's unbelievable to me is that there are - and ohhhh boy, there are - coaches at the highest level hockey who make their players guess. Randy Carlyle comes to mind. How the hell can a guy improve something if he doesn't know it's an issue? Why would there ever be a "secret" between a coach and a player? I think communication is such a huge part of the job that...that it just baffles me. It's like a terrible relationship moment. Well if YOU don't KNOW what's wrong, then why would I tell you?

Boudreau is called Gabby for a reason. We're probably sitting much better these days for it.