Share All sharing options for: Ducks/Devils Preview: Can't be Weirder than Last Time

41-year-old Jaromir Jagr leads the Devils in goals, assists and points which reminds me of the Ducks two years ago. In the horrendous 2011-12 season a 41-year-old Teemu Selanne led the Ducks in scoring, and while it was nice to see that a legend like him still had it going, that stat said more about how poorly the rest of the team played throughout the year. If you're relying on a player who is old enough to be the father of another player on your team that much, things probably aren't going very well, and so it is for the Devils this season.

Keys to the Game: In the second game of a season series, normally I would look back at the first meeting to see what went right and what went wrong for the keys to the game. However, in this case that doesn't really apply because three of the Devils' four goals were so unjustifiably awful that they have to be basically ignored. The first two were power play goals off of an objectively incorrect high sticking double minor and the game winner was an own goal. So, kill penalties even if you didn't commit them and don't score on your own net in overtime. Got it!

Seriously though, one thing that can be learned from the first meeting of these two teams is that the Devils are pretty good in the third period. They haven't lost a game in regulation this season when leading after the second (8-0-1) and they're sixth in the league at coming back when trailing after 40 minutes (4-11-1). One of those four wins game in Anaheim when they tied the game with 1:01 remaining in regulation; the shots on goal per period were 9-8 for the Ducks in the first, 11-3 for the Ducks in the second and 12-3 for the Devils in the third and the shot attempt (fenwick) chart from extraskater.com looked like this: 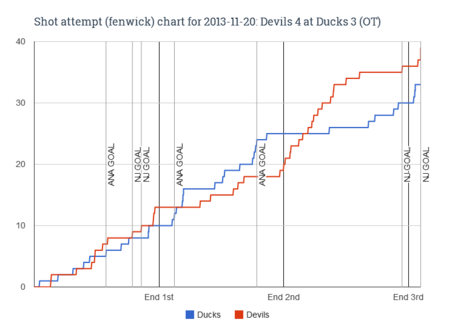 So it would behoove the Ducks to give themselves some cushion going into the final frame and not to just sit on it, because the Devils will come at them hard in the third if they do.

What Can We Learn From This Game: This may in fact be the best lineup that the Ducks ice all season. While I don't necessarily believe that this game will prove or disprove that statement, the return of Jakob Silfverberg makes the team healthier than it's been for most of the season. Only Sheldon Souray, Luca Sbisa, and Viktor Fasth are out with injuries and I don't think that adding any of those players at this point would vastly improve the team's fortunes.

It also helps that the Ducks' injury luck has seemingly done a complete 180 in the past couple of weeks. Not only are they getting healthier by the day, they've avoided some near catastrophic injuries in the past two games, between the hits on Nick Bonino and Ryan Getzlaf, Francois Beauchemin blocking a shot with his face, Silfverberg taking a puck off the hand and Jonas Hiller getting a stick in the throat. Does anyone here think that if that same series of events had happened in October all of those players would have come out relatively unscathed? ‘Cause I sure don't.

There is a case for those who want to argue that having Emerson Etem up with the big club in place of a Tim Jackman or Matt Beleskey would give the Ducks a little more offensive flair. However, in the past couple of weeks Kid Ish has done a good job of defending the roles of Jackman and Beleskey in on the roster. Also the fact Boudreau and Murray consider it better for Etem to be playing top minutes in Norfolk is a good indication of the kind of playing time he'd be seeing if he was with the Ducks.

Fearless Prediction: There will be no own goals in this game for either team, but I'll be totally ok with it if Marty Brodeur wants to just leave his stick laying around.