Ducks enter the Christmas break by sweeping a four game road trip, extending their franchise record steak to nine straight wins, leading the league in the standings and exacting some form of vengeance for their head coach with a 3-2 win in Washington.

Share All sharing options for: Ducks Rock the Red with Three Unanswered

First Period Recap: The Ducks are starting to make a habit of starting slow.  The first period started with some failed clearing attempts and defensive zone turnovers which naturally led to the Ducks going shorthanded a couple of times against a team which nobody wants to take penalties.

The first two power plays of the game went to the Caps resulting from Saku Koivu hooking penalties.  Right off the bat in the first Caps advantage Alex Ovechkin was allowed to unleash his deadly one timer from the top of the circles but neither went in.

About two minutes after the kill Mikhail Grabovski got behind Ben Lovejoy on the rush to create a 2-on-1 with Troy Brower against Cam Fowler.  The two Caps played a game of catch around Fowler, pulling Jonas Hiller to the top of the crease and Grabovski opened the scoring by tapping the puck around the Swiss goalie.

Just past the midpoint of the period, Koivu went off for his second penalty of the game and this kill didn't last as long.  In fact it only took 11 seconds for Nicklas Backstrom to extend the lead to two.  His shot from the faceoff dot beat Hiller, but tagged the post and rebounded off of Jonas across the line.

Toward the end of the period the physical play picked up, most notably as Jason Chimera dumped Perry into the Caps bench.  The Ducks responded by getting the puck deep more often and as such they were able to draw back within one goal.  Andrew Cogliano scored at the end of a strong forechecking, cycling shift that got the Caps' D scrambling down low and goaltender Phillip Grubauer swimming a little bit.  Cogs got free on the far post, Koivu poked it to him and he backhanded it in with 2:45 remaining in the period.

To finish the period the Ducks drew a penalty and started the second with their first power play of the game.

Second Period Recap: The PP to start the middle period wasn't incredibly dangerous, but did a good job of causing chaos and confusion in front of Washington's goal crease.  Corey Perry and Dustin Penner were right on top of Grubauer but couldn't really get a handle on the rebounds or tip anything in.

Still early in the second, Perry took a penalty that was classic Perry douchebaggery in that he tripped Karl Alzner and tried to make it look like an accident, but it was also somewhat unlike him because it was in the Ducks' zone about a mile behind the play.  It was a dumb play by Perry to give the Caps second ranked PP a free opportunity, but he got away with it as the Ducks kill improved steadily after the Backstrom goal.

The middle to end part of the period was mostly marked by interchanging penalties for each team.  First it was actually the Caps with back to back kills.  On the delayed penalty for the second, Jay Beagle (who was set to go off for hooking) looked more like a pit bull as he hounded Hampus Lindholm (Ba-Dum-Dum!) all the way back behind the Ducks' net, but Hampus did a great job to protect and control the puck, getting it back up ice while Hiller got off for the extra attacker.

The most important thing to note about the Ducks' second period power plays was a slight change in strategy, where they were looking to get the puck to a guy in the  high slot (normally Perry or Getzlaf) rather than crashing in really close.  It was successful to a point, as they got the puck seemingly with space, but were closed down quickly and unable to get real quality shots on net.

Three penalties overlapped providing each team with truncated advantages and kills as well as some four on four.  As stated before the Ducks PK improved as the game went on and Ovie was forced to make more passes when he got the puck than anyone in red would have liked.

After the back and forth penalties were over, Koivu tied it up with a snapper in close, but for me just as much credit for that goal should go to Ben Lovejoy and Cam Fowler (even though Fowler didn't end up with an assist).  Hazy made the point of emphasizing Lovejoy's role, leading the rush, holding off Ovechkin as he carried the puck below the goal line and flicking the puck to Koivu at the front of the net with one hand on the stick.  However, Fowler's outlet pass to Cogliano from deep in the Ducks' zone was also a thing of beauty.

For the second time in the period, Cam held the puck on the end boards for an extra split second to draw the Washington forechecker in before burning him with a short pass.  I believe the first was to Getzlaf while killing the Perry penalty for an easy clearance and the second was to start the breakout for the tying goal.  Gorgeous display of patience and puck support there.

The Ducks had the better of the play in the second, outshooting Washington 11-4 and went to the dressing room tied at two.

Third Period Recap: The final period was played relatively evenly and conservatively for each team.  The Ducks killed a Cogliano penalty early without much incident.  After Cogs missed a pass meant to spring him on a 2-on-1 (just out of his reach) he got caught behind the play and hooked Dmitri Orlov where the sun don't shine.

Halfway through the period, Lovejoy almost capitalized (wink, wink, nudge, nudge) on a Washington line change with a stretch pass to Perry, whose shot got wedged under the awkwardly outstretched left pad of Grubauer.

But the game turned on two plays in the last six and a half minutes of regulation.  First it was a save by Hiller on Chimera right at the doorstep.  Beagle carried the puck behind the net and as Hiller turned his head, switched the play back with a nifty little pass to Chimera in front.  Hiller was able to get his skate back to the right post, and Chimera couldn't lift it over his pad.

On the very next shift, the PPG line got a great zone entry from Getzlaf.  The captain drew two defenders and laid a drop pass off to Perry trailing him.  Getzy went to the net and received the return pass, tried to jam it in but John Carlsson cleared the rebound.... right to Hampus who wristed it through traffic and into the back of the net, giving the Ducks their first lead of the game 3-2.

That goal held up as the game winner, thanks to a blistering Ovechkin shot going off the crossbar down into the crease and staying out with slightly over three minutes remaining.  The red light went on, the goal horn sounded, th spot light hit Hiller, but the ref immediately waved it off, and rightly so.  The crowd at Verizon Center was not happy, as they apparently weren't shown the definitive overhead view, but it was clear as day that the puck never crossed the line.

And with that, the Ducks just keep on trucking, racking up their ninth win in a row and Bruce Boudreau can go shopping at Louis Vuitton and Haagen Dazs tomorrow morning with a smile on his face.  To co-opt a phrase from former Mighty Duck and Boudreau's 24/7 counterpart Dan Bylsma:  What's better than nine?  Ten.  (Magumbo)

The Good: Top of the league at Christmas, on a nine game winning streak, getting goals from throughout the lineup, created by five man offensive plays, keeping the league's leading goal scorer off the score sheet (even if by a matter of inches).... take your pick.  It's good to be a Ducks fan right now. 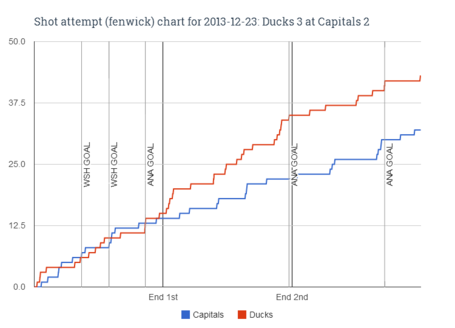 Again, good to see the improvement, but better if that gap could start a little further to the left.

3rd MVD: Ben Lovejoy/Cam Fowler - It wasn't a perfect game as they were burned for the first goal, but as the game progressed they did a wonderful job of containing Ovechkin and getting the play going the Ducks' direction.

2nd MVD: The "Third" line of Koivu, Cogliano and Daniel Winnik - Again, not a perfect game by any means, they took their share of penalties that could have cost the team dearly against such a potent PP, but when a "checking line" outscores the top line of the opposition you'll always have a great chance to win (see Pahlsson, Samuel; Niedermayer, Rob and Moen, Travis).

1st MVD: Hampus Lindholm - The first and last goals were both a result of Lindholm getting to poor clearing attempts up the middle of the ice and slinging shots through traffic.  He got the secondary assist on the first one and the game winner late.  That's not to mention the outstanding positional defensive play that we've come to expect from the 19-year-old Swede.  Don't you just fall deeper in love with this guy every game?

Next Game: Saturday, December 28th @ 5PM back home to the Phoenix Coyotes