Will Cam Fowler don the red, white, and blue in Sochi?

Share All sharing options for: The Olympic Watch: 'MURICA!

Yes, believe it or not, Sochi Olympics are right around the corner. As of today, it is already the tail-end of December...which means it will soon be the new year of 2014...and with that, February is just around the corner...which means we throw all our NHL team loyalties out the window and don our national flag capes and run around belting out our national anthems. (Don't deny you have always wanted to do that.)

Just like in 2010, there will be more than a few Ducks wearing different colors and names on the front of their jersey. Some of the Ducks are complete locks while others are on the bubble...but even for those locks, there are questions that remain regarding their roles on their respective teams. The rosters for the hockey teams are to be finalized by January 7th. USA Hockey is set to release their final roster during the new year's Winter Classic on January 1st. Set your clocks for the actual unveiling since the game itself won't likely amount to anything too exciting. So in the next couple days, I'll be focusing on some questions regarding our Ducks before the rosters are announced.

(The AC staff did a marvelous job covering this subject among many others in the latest podcast, which you can get here.)

Ahhh--the Winter Olympics. The torch relay through the cold, the five rings shining brightly against the snow, the wave of flags we (geographically uneducated Americans) have never seen; we embrace the national pride, the hostility between nations, the good ol' competition....I love it all. I personally love this time because it is literally the only time in the year where we can transcend the NHL rivalries and lines, and simply unite under one flag ('MURICA)! I mean, really, when else am I going to root for Kings players (God forbid) and cringe about our very own Ducks, and unite with all other nations sans Canada to boo the "chosen one" Crosby? A very exciting and confusing time for hockey fans.

So to start this Olympic Watch series off, I'm going to begin with the biggest and toughest question on all Ducks fans' minds regarding the Olympics: Will Cam Fowler make the cut for the 2014 US Olympic Hockey team???

Questions on the Blue Line

This one is a doozy, so bear with me. 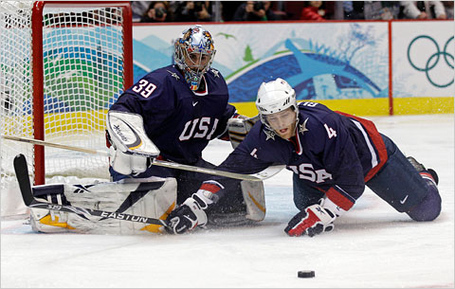 The US team seems to be mirroring the same problems as the Ducks have seen all season long, such as, the problem of bounty in net and the question of the blue line. Next to the looming question of who takes net lingers the question of which defensemen will receive the final slots for defense.

Here is the initial roster for those invited to the USA Hockey:

By no means is the list final--players who were not invited could still make it onto the team; conversely, players invited are neither guaranteed a spot on the final roster. From the list, you can obviously cross some that are have been out of the conversation. (And I have already done so for you.) The only sure lock that everyone can agree upon is Wild's Ryan Suter. One of the elite defensemen of the league, he will undoubtedly anchor most ice time. But after him, it's a bit of a toss.

It all depends on what balance USA hockey is looking for on the blue line....How much will they want to balance the offensive power with the defensive shutdown capabilities? Or do they want to slant it one way or the other? Is it worth the risk to go with a more offensive-minded defenseman that falls short on his own end? Realistically, which of these defensemen can skate competitively on international ice?

After a slow start, some will argue for Ryan McDonagh as a contender after [finally] emerging as the number one defenseman for the Rangers of late. Kevin Shattenkirk has been a huge asset in the Blues' current success and leads discussion as an offensive-minded defenseman. As a GM, can you trust Keith Yandle to play both ends of the ice? The injuries to big name blue liners such as Paul Martin (broken leg) and Brooks Orpik (concussion) add another dimension to the debate as to whether either player will be fit for play in time? Rookie-sensation Seth Jones has been a feel-good story as potentially making the final US roster, but as the season has progressed, Jones has seen his ice-time being reduced.There lies the question of which players can be trusted to play and skate against the best offensive talent of seasoned veterans? And finally, one of the most important factors when deciding the final roster will be playing on international ice. While Dustin Byfuglien leads in scoring among the American defensemen, you can hardly make a case for him skating on international ice. So with all these questions in mind, I bring you to....

Cam Fowler....How has the solid breakout play of Cam Fowler in the beginning of this season has led him to become a serious contender for a final roster spot for Team USA.

The Case for Cam

Whoops! My bad, so maybe this doesn't present the greatest case for Cam....Let me get back to the point.

When Cam Fowler, Kyle Palmieri, and John Gibson were all first invited to the Men's National Team Orientation Camp, there seemed little chance with any of the three making the final cut. But from the outset, GM David Poile opened discussion for younger players to compete for a spot on the final roster. The NHL regular season performance would determine the final picks for the US team.

In a strange way, the depletion of the Ducks main defense corps has actually come to the advantage of Cam in light of Sochi. He, Ben Lovejoy, and the rest of the younger Ducks have had to step up to fill in the defensive gaps left by the injuries at the start of the season. While this could have tanked the entire first half of the season for the Anaheim hockey club, the guys did a marvelous job in not only filling the void but also making a strong case for a roster spot once everyone is back in health.

But of all the defensemen, it is Cam Fowler that bore the heaviest burden upon his shoulders thus far. While Cam's gorgeous (I repeat, gorgeous) skating gave him offensive prowess, the pitfall always came from his own end. Carrying over from last seaon's playoffs, Cam's noticeable improvement back in his own end has gained the confidence of his coach into increasing his ice time. This season has seen an entirely invigorated Cam Fowler with the pairing of Ben Lovejoy. The success has not only been translated in the plus/minus column, but his confidence has made him a genuine offensive blue line threat. He currently sits with 4 goals and 17 assists in 39 games. (In the last shortened season, he had 1 goal and 10 assists in 37 games.) Is this the Cam Fowler that we all hoped to see breakout when he was drafted in the first round?!!

The difference from previous seasons is not only the stats, but the identity which Fowler has taken up as a defenseman. For so long, his potential has been lauded as comparable to Scott Niedermayer, and when he failed to meet the high expectations, he lost confidence in his own abilities. Cam isn't the reincarnation of Scott Niedermayer, and I think he has finally embraced his strengths and been able to grow confidently into the defenseman he is comfortable being.

Under the tutelage of Scotty, he has developed the puck sense to know the best position to facilitate offensive opportunities for his teammates or maintain the gaps to defend the play. What makes Fowler a serious contender is his ability to skate as a two-way puck-handling defenseman. This injury-riddled season has allowed him skate top minutes and to compete against the top lines of the NHL. And looking at the results, he has only become better. No longer does Cam draw back or lose positioning without puck-possession; rather he has emerged as a solid shutdown defenseman that constantly looks for the best positioning at both ends of the ice. 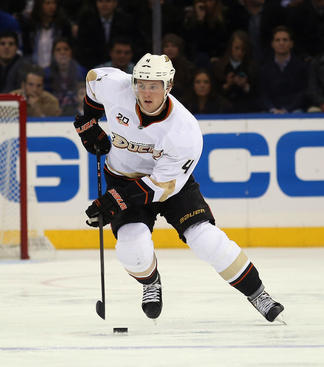 So, with all this being said, will Cam Fowler make it onto the final Team USA roster for Sochi Olympics? This is probably one of the biggest unknowns for the Red, White, and Blue....But I'm going to go out on a limb and put my name on the line and say YES.

[Ed. Note: So did five of six Puck Daddy/Yahoo! staffers (Sean Leahy being the outlyer). Three guesses which one had him in the top pairing with Suter? Hint: She used to manage this site. -CK]

Not only has he really upped his game this season, but so much so that he has garnered a lot of attention across various hockey and media sources. While he is still young and he has the negative blot of a pretty terrible minus column, I believe that this season has proven that he has turned a page and begun to own the identity of a seasoned NHL-er. I think we will hear his name being called January 1st and we will see him skate with the best in February. The bigger question now is whether you find the USA jersey aesthetically pleasing enough to will buy one with the name "Fowler" stitched on the back....

But God forbid, if not this year, Cam will certainly be there the next time around.