Share All sharing options for: The Olympic Watch: Finland

The big names of Team Canada, Team USA, and Team Russia have come to be the main talk of Olympic hockey in the upcoming 2014 Sochi games. But one of the dark horses of the tournament that cannot be overlooked consists of accomplished veteran forwards and the most spectacular bounty in net--Team Finland.

I think most Ducks fans have a soft spot when it comes to Finland just because it has produced the most lovable man in hockey, as well as some amazing all-around top talent. I swear that Finns are born with ice in their blood, because they just seem so natural on the ice.

With regards to the Finnish Olympic Team, the biggest question which is the question of which wall to put up in net has nothing to do with the Anaheim Ducks. So I won't be opening conversation on that here. So, there aren't too many questions one can pose having to do with the Anaheim Ducks bearing the name SUOMI in Sochi. You practically would have to not watch hockey to not know that both veterans Teemu Selanne and Saku Koivu are virtual locks for Olympic team. Therefore, I will pose a different (though not as exciting as the case for Cam) question involving both our beloved veteran Ducks....Among the several well-qualified candidates, who will take ultimately take captaincy for Team Finland in Sochi? 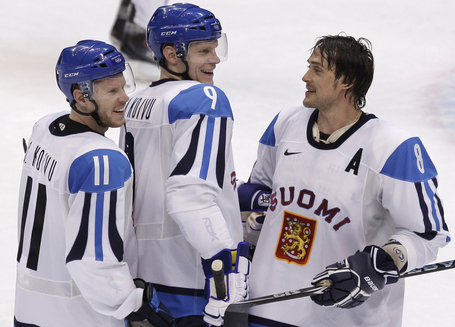 Despite never having won the gold, Finland has potential roster of both well-seasoned veterans and up-and-coming gifted Finns. Among the impressive roster of forwards, two names are all too-well known for Ducks fans. Saku Koivu. Teemu Selanne. Both Finns have had impressive careers along with a list of high accolades yet to be matched by most hockey players. Both Finns have had their share of international appearances representing Finland. And both Finns plan to compete in one last Olympic tournament.

So naturally, one would assume that either Saku or Teemu would lead Finland in Sochi. But another Koivu also boasts leadership, hockey sense, and respect of teammates. In fact, even more than the-world's-favorite-Finn, Mikko Koivu of the Minnesota Wild takes a larger part in the captaincy conversation. According to the Finland Olympic Coach, Errka Westerlund, either Saku or Mikko will bear the "C" for Finland this coming February.

In the last 2010 Vancouver Olympics, Saku Koivu was named captain of Finland's hockey team. But both brothers have had their share of leading Team Finland through various international competitions, with the older Saku taking the majority. But Sochi may possibly have the younger taking the lead. His strong play on the ice and strong leadership in the locker room only reinforces his case for captaincy for Finland. But in the end, the elder Koivu has the respect of the younger Koivu, for Mikko has come out and stated that he would allow Saku to decide. One can argue that Saku would take on the "C" one last time for his last Olympic games. At the same time, one can also counter-argue that this would be the ideal time for Mikko to transition into captaincy of Finland's team since both Saku and Teemu are likely to retire after this year.

And of course, along with the Koivus, there will always be hockey fans that cry out for Teemu's leadership of Finland, because...why else, other than the fact that he is the greatest Finnish hockey player in the history of the NHL. And because he is capable of doing this at a clutch moment. But as much as everyone loves Teemu, I do not think the "C" matters so much to him. Whether it's with the Finland Olympic Team or on the Anaheim Ducks, Selanne has a proven historical contentment with wearing the "A" instead. He is just that kind of player.

So who will have the honor of wearing the "C" on the left of their powder blue (or Finnish flag) chest come February? I'm going to have to go with Koivu on this one.

Haha, is that a cop out? Ok...I'm going to go with our Duck, the elder Saku Koivu to lead Finland in Sochi. The fact that this may will be his last Olympics presents a strong case for his captaincy. The fact that he signed on for one more year with the intention of playing in one Olympic tournament highlights the personal importance of the event. But in the end, Saku is in it to win it. If Saku does decide that Mikko would better exemplify the leadership required to make Finland a top contender, he will defer to his younger brother.

Wait...we're not fin(n)ished with the Ducks on the Finnish roster!!! 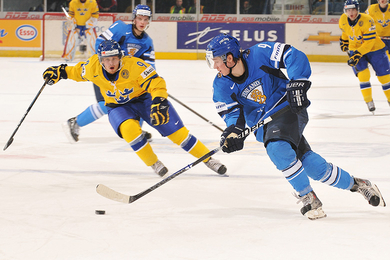 (I apologize for the numerous "Finnish" puns.)

As an added bonus to this post, I decided to throw one more Duck into the discussion of Finland since we really cannot overlook the guy. Besides Teemu and Saku, who will we most likely/assuredly see in the powder blue this February? I'll give you a clue.

And he's currently on the roster. (So no, it's not Toni Lydman.)

His picture is right up there ^^^.

Why yes, our fearless little defenseman, Sami Vatanen, may have very well earned his way onto Finland's Olympic team. The obvious weakness in the Finland team is on the blue line. Currently, only five Finnish-born defensemen play in the NHL. Retired-Duck Toni Lydman was invited to Finland's Olympic camp this past summer but seeing as he is no longer playing, we probably won't be seeing him back on the ice. And like in the case for Cam Fowler, the depleted Ducks d-corps allowed Vatanen the opportunity to get quality ice time to prove that he can play with the big boys of the NHL. Despite his smaller frame, his quick skating ability, relatively good positioning, and fearlessness to grind after the puck will be a great asset on the blue line for Finland. Thus, at the ripe young age of 22, Sami may very well find himself flying out to Russia for his first Olympic appearance. Bet you forgot about this third Finnish Duck and didn't really see this one coming in this Finland article did you? So here I leave you with not only two, but possibly THREE more Ducks that we will see compete in Sochi! Finland will continue to hold a place in all Ducks fans' hearts.

And with that, all you non-Finnish die-hard Selanne fans out there are excused to betray your roots a bit and take out your vacuumed-tightly-sealed SUOMI Selanne jerseys (without the "C") for one last Olympic run.