The Hockey God of Scheduling really sucks sometimes--this back-to-back in two of the most difficult buildings in the league for the Ducks pretty much proves it. However, the Ducks have earned a chance to slay two giants in 24 hours in the final chapter of a grueling six-game road trip.

Your Enemy: On The Forecheck

Less than 24 hours removed from what can easily be called one of the most satisfying victories of the season thus far, (a list that's growing pleasantly lengthy at this point) the Anaheim Ducks have a chance to take this back-to-back from hell and walk away with all four points like Arnold Schwarzenegger walking away from an explosion. 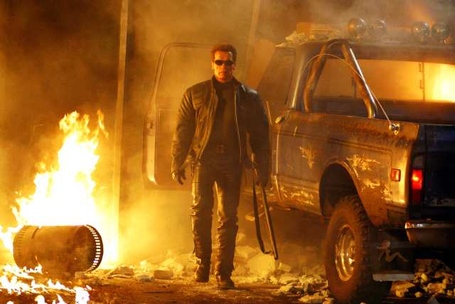 Except for the second period last night, the Ducks skated circles over a Detroit Red Wings team that has struggled this season and wasn't helped by some particularly big names being absent (*cough*PavelDatsyuk*cough*ToddBertuzzi*cough). But Joe Louis Arena has been far from friendly to the Ducks for a long time now; last night's win was the squad's first there since February 2008, so the Ducks will take it.

While Ducks fans celebrated at home, the team quickly packed their crap and traveled 534 miles (according to Google Maps) to yet another building that's been far from warm and cozy: Bridgestone Arena, home of the Nashville Predators.

I'm sure the facilities are first-class and the people of Tennessee are as warm-hearted as you would expect in Tennessee (I have no idea what that means...) but it's the team in that building which has given the Ducks absolute fits in recent history.

Barry Trotz and his Nashville Predators have the Ducks' number; that was made abundantly clear during their 2011 playoff series. In fact, since 2009, the Ducks are 6-13-0 against the banana-clad boys from the Music City, and an even more dreadful 3-9-0 in road contests.

However, the Ducks did triumph against Nashville once this season already, scoring a shootout victory on Jan. 26. Most Ducks fans will remember that game as Viktor Fasth's debut and first victory, which he punctuated with a flourishing glove save in the skills competition.

With Jonas Hiller still injured due to what has been revealed to be a groin injury, the Ducks have called up Jeff Deslauriers (HOLY CRAP I SPELLED THAT RIGHT THE FIRST TRY!), and according to Eric Stephens of the OC Register he's likely to back up Fasth for the fourth straight game.

While the Ducks have grown used to some pretty steady goaltending, the Preds have an even better reason to scoff and call us amateurs. Pekka Rinne has been nothing short of unbelievable in Nashville with a 1.61 goals against average, and a .938 save-percentage. Oh, he's also riding a two-game shutout streak and has bageled the opposition in three of his last four starts. Some people are even talking about him as an early favorite for the Hart Trophy.

That stretch, has vaulted Nashville to fourth in the West despite their offense being DEAD LAST in the NHL with only 1.86 goals per game. I'm not kidding. Go look it up. In fact, they're the only team in the league averaging less than two goals per game. Yet the Predators have still managed to win six of their last ten times out.

All things considered, the Preds have always been a defensively-minded squad, led by their Goliath-like captain Shea Weber. Their stifling trap game is designed to win low-scoring games, and offensively-geared Anaheim has frustratingly been victimized by this many times.

Luckily, Duck-killer Patric Hornqvist will not be in the lineup this time as he sprained his knee in the previous game between these two sides. He has 14 points in 16 career games against Anaheim and always manages to create a havoc, even when he's not scoring.

As this trip has proven, the Ducks can win this one just like any other game this season; as long as they can keep a level head and not get frustrated by the patient Nashville trap, good things can happen.

Likewise, it'd be great for Corey Perry to permanently kick the monkey-turned-obese-gorilla off his back by notching his third goal of the season. Heck, if he could get a pair and give the Ducks their tenth player with four tallies on the year, that'd be great too.

In the meantime, I'm headed for Hooters to celebrate kicking the crap out of the Wings... with some free wings!

Fearless prediction: A slightly confused Chris Hanson shows up in the middle of the game and forces the entire Predators roster as well as Gnash, the mascot, to have a seat on the blueline. Hilarity ensues on the Ducks bench.

GAMEDAY: Ducks Hang On to Win ANOTHER Shootout, 3-2