GameThread: Ducks at Stars, Hiller Playing To Keep No. 1 Spot

All eyes are on Jonas Hiller tonight as he takes to the net after his backup has played stellar. Hiller needs to show Boudreau why he's the No. 1 goaltender for the Ducks or else he will be come No. 2 very Fasth.

Share All sharing options for: GameThread: Ducks at Stars, Hiller Playing To Keep No. 1 Spot

In preparation for another story, I had to look at the NHL standings. I don't usually look at them this early in the season because everyone is so bunched together, points wise. Anyway, much to my surprise, this is how the standings looked as of this morning: 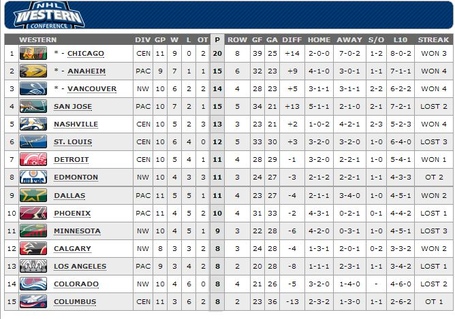 Well look at that. Second overall - for now.

Raise your hand if you thought the Ducks start to the season would be THIS good. I'm not talking just winning the first couple of games. I mean, going 7-1-1................. LIARS.
The most objective of Ducks fans (i.e. not fan-boys/girls) could not have seen this coming, especially considering the state of the team at the end of last season. They missed the playoffs, the oldest player on the team lead in points, it was career-worst years for two superstars, the goaltender played a bajillion games and we had no third and fourth line.
Sure Bob Murray and Bruce Boudreau made some changes and brought up players from the minors to fill out the roster; yet, there were no changes that made me say 'this team is going to be great from day one". By no way am I calling this team 'great'. Chicago is a great team. We are a puzzle missing it's four corner pieces.
Everything has started to fall into place in a way no one expected. Of the 31 goals scored by Anaheim, Teemu Selanne (3), Ryan Getzlaf (3), Corey Perry (1) and Bobby Ryan (2) have combined for 9 goals. Pretty unbelievable considering for years it's been, 'as the big four go, so goes the Ducks'. Now, instead of the big four being four players, we've got the big four as in four actual lines that actually contribute to the team's offense.
Speaking of offense, Dallas has Loui Eriksson. I noted in my interview with Brad Gardner from Defending Big D, how Eriksson absolutely owns the Ducks. In 36 games, he has 14 G, 14 A and 91 SOG. Loui is slumping right now and the Ducks can't give him anything to get rolling on. I like our chances if we can manage to stop him and Jamie Benn and somehow get goals past that damn Kari Lehtonen.
Hopefully Jonas Hiller has used his time on the bench to get his mind right and will break his on and off trend of allowing three-plus goals in a game. He's essentially playing for his position right now. Wunderkind Viktor Fasth is making him look not so great and if Hiller wants to remain No. 1, he needs to play like No. 1.