Blackhawk(s) Down in Anaheim! Ducks Win Battle of NHL Giants 4-2

The national media talks about statement wins a lot... I wonder if they're listening after this one.

Share All sharing options for: Blackhawk(s) Down in Anaheim! Ducks Win Battle of NHL Giants 4-2

First Period Recap: This game had a lot of hype leading up to it; so much that it drew the largest crowd in franchise history to Honda Center (17,610, standing room only). And the first five minutes certainly didn't disappoint. It took only 84 seconds for The Flying Dutchman aka Peter Holland (see what I did there... yes? Good. Cause it's going to stick.) to score the first goal of the game, picking a wide shot off the boards and tapping it past Corey Crawford. It was a dream start.

It didn't last. Just two minutes later the Ducks got a power play after a Bryan Bickell interfered with Jonas Hiller and instead it was the Hawks who would score. Sheldon Souray tried to let a hammer go that hit Jonathan Toews in the shin pads and sprung him on a breakaway which he promptly buried. It was the first shorthanded goal the Ducks have surrendered all season. Goat horns to Souray for the play; they teach you never to take that shot when you've got a blocker at Toews' range and you're the last man back. It's Defense 101. Very poor decision, regardless of how hard your shot is. [Ed. Note: Of all the great goals in this game, Toews' goal made Sportscenter's Top 10. - JN]

But the Ducks shook it off and took over again. For the next 15+ minutes the Ducks controlled the play almost completely. 12 minutes into the frame the shots read 7-2 Anaheim and the period would finish 11-5. Chances from Andrew Cogliano, David Steckel, and Ryan Getzlaf were all smartly robbed by Crawford, who was undoubtedly Chicago's MVP through 20 minutes.

The Ducks owned the hitting department as well, scoring an 18-8 advantage.

Other than Souray's brain-fart that cost us a goal, it was about as good of a start as the Ducks could have wanted.

Second Period Recap: The Ducks came out strong but quickly went short-handed when Bryan Bickell sold an interference call to the officials. The Ducks responded perfectly; the PK denied Chicago any offensive zone pressure and the speedy duo of Cogliano and Emerson Etem earned a few chances of their own. For a PK that's been so anemic all season these two have certainly been a pleasant surprise.

The Ducks continued to control the majority of the play and piled up the shots.

The Hawks would get the next chance with the man advantage yet again as Jonathan Toews continued to cause havoc for the Ducks, getting a step on Sheldon Souray (again) who tied him up to prevent a goal. It wouldn't matter as Nick Leddy gave Chicago a 2-1 lead with Viktor Stalberg blocking out the sun in front of Hiller.

It was a horrible point to be at: the Ducks were dominating the game and controlling the play but losing.

Some chippiness came in late as Dave Bolland ran over Jonas Hiller in the Ducks goal crease but it was a good non-call as it was pretty apparent Anaheim shoved him in. That seemed to be the start of the Ducks' deflating however as Chicago started to impose their will slowly after.

The Ducks got a huge break late in the period as Hiller robbed Brandon Saad with a shoulder save that left a juicy rebound right on the stick of Patrick Kane who backhanded it narrowly wide.

The period ended with an 11-7 shot advantage to the Hawks, bringing the game total to 18-16 in favor of Anaheim.

Third Period Recap: Things got worse. The Ducks came out flat-footed and almost immediately gave the majority of the momentum to the Blackhawks. When they finally did get the puck, most guys weren't moving their feet to create a passing option.

Brandon Bollig thought he had his first goal of the year after jamming one past Hiller, but a video review showed it was clearly kicked in and it was waved off.

The Ducks slowly started to turn the momentum and Chicago slowly began to pull into their defensive shell and for a long time it worked. Frustration reigned supreme as the Ducks could barely get even a decent chance against Crawford who looked stellar all night.

With a little over 5 minutes left in regulation it would be Bobby Ryan who would ignite the home fans at Honda Center and tie the game at 2-2. Ryan Getzlaf bull-rushed his way down the right wing and threw a shot off the Chicago netminder's pads which the Cherry Hill, New Jersey native tapped into a wide open frame. The Ducks fans in the building may have been outnumbered but I couldn't tell watching at home. That place exploded.

And then the roof blew off 1:04 later. Old man Teemu Selanne, who I've been saying is due for a goal for weeks now FINALLY tossed the scoring monkey off his back. Suddenly 15 minutes of a frustrating third period and trailing 2-1 had turned into a 3-2 Ducks lead before that one poor guy got back from the bathroom!

Suddenly the third period looked exactly like the first: all Ducks. Moments later Cogliano took a nasty high stick to the mouth from Brandon Bollig. And I mean a bad one. I'm talking blood and what turned out to be several teeth. 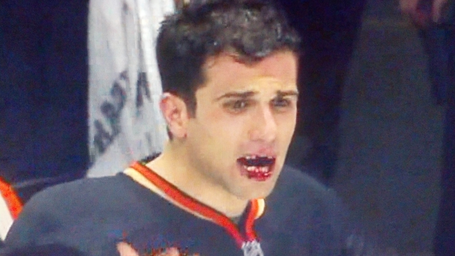 Yeah that happened. And lo and behold... no call from the only people in the building with the power to make one.

Well the Ducks should be on a 4-minute power play. They're not, but they should be.

That series of events lit a huge fire under Anaheim's collective bum. The game completely turned. Chicago had no idea what had hit them and made a pretty weak late attempt to tie the game, but the Ducks would have none of it.

Sheldon Souray, who had arguably one of his most lackluster and forgettable performances, put the icing on the cake by scoring from about 180 feet away into an empty net, getting Jonas Hiller an assist.

With Chicago fans headed for the exits, the building roared one more time as the clock ticked down to triple-zeros. Eight more shots each in the frame brought the game total to 26-24 Anaheim.

The Ducks win the battle of the juggernauts in regulation 4-2, picking up two points on the only team ahead of them in the standings: the Chicago Blackhawks.

The Good: Once again this team never gave up. They got shut down, frustrated, and missed calls against, but anger didn't translate to bad penalties, it turned into goals, particularly in the third period. Amazingly, the Ducks are winning 72% of the time they go into the third period trailing their opponent.

- The [new] Kid line of Holland, Palmieri, and Etem saw a lot of ice time and did great things with it, including getting the first goal of the game before most fans had time to even get to their seats.

- Except for one (read on to find out what I mean...) the defense was pretty good tonight. Cam Fowler was an absolute beast, having several instances where he showed flashes of a certain former Ducks defenseman who could skate like none other. (If you still need clarification after that... Scott Neidermayer. Come on.)

- I think Getzlaf justified some of his big paycheck tonight with all the eyes of a nationally televised audience on him.

- And amazingly, the Ducks are now 2-0-0 against the team that many thought could not be beat.

The Bad: Even though we're winning we still aren't playing games for 60 full minutes. The Ducks played the entire first, part of the second, and six minutes of the third... so roughly 36-40 minutes of hockey. They can't keep doing this and expect to win.

- Sheldon Souray had a very poor night, being the party to blame for both goals against. He did sort-of make up for it with that empty-netter at the end but I still wasn't impressed.

The Ugly: ESPN's coverage immediately following the game read the Hawks winning despite the score being 4-2 Anaheim at the end of the third period. 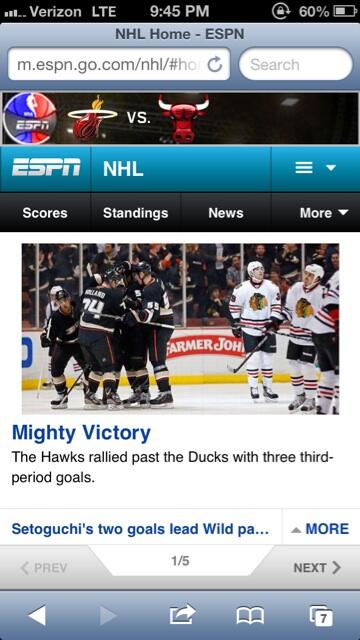 Worldwide Leader in Sports my butt.

3rd MVD: Bobby Ryan and Teemu Selanne both came up with enormous goals to spring the Ducks out of their funk and into the lead. Your stars have to play like stars, and both of them certainly did tonight to make up for absence of Corey Perry for the fourth - and final - game of his suspension.
2nd MVD: Andrew Cogliano played like an absolute warrior tonight. Playoffs in March? I think someone told him it was. He was spectacular killing penalties with Emerson Etem. Late in the game he even took that nasty high stick from Bollig and didn't even miss a shift. Went to the locker room for what had to be no more than 14 seconds and got right back on the ice. You've got to admire this guy's heart tonight as well as the role he's molded for himself on this team.
1st MVD: Ryan Getzlaf answered all doubts and questions as to why we gave him that contract extension tonight. Captain Baldy set up both Bobby Ryan's game-tying-goal and Teemu Selanne's game winner by essentially turning himself into the raging bull that he is. Getzlaf played angry tonight and I've said many times: angry Getzlaf is good Getzlaf because as long as he reins in his temper, he plays like very few others in the world can. He almost single-handedly willed this team to win tonight.

And after the game it was revealed he did all of this with the flu. You want to talk about a leader? Getz is the Ducks leader. $8.25 million a year? Worth every penny.

And no, we aren't going to regret it.