Best of Twitter: The LA Kings' Shenanigans and "CROSBY IS DATING WHO?!!?" Edition

More social media gold from the world of hockey and the Anaheim Ducks from this past week.

Share All sharing options for: Best of Twitter: The LA Kings' Shenanigans and "CROSBY IS DATING WHO?!!?" Edition

Welcome back to another edition of The Best of Twitter, where I bring you the best snippets of information on the internet that are less than 140 characters in length... sometimes.

This week has largely been dominated by a few interesting headlines.

First off, the NHL has reportedly booked Dodger Stadium on January 25th, 2014, and the popular rumor is that the facility will play host to an outdoor game between the LA Kings and our very own Anaheim Ducks. 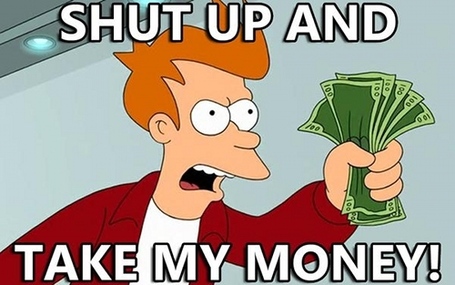 Me, the moment tickets become available for the California Classic, 2014. via forums.watchuseek.com

While this has me about 50 different kinds of excited, it got the internets abuzz as well with discussions on everything ranging from the ability of California to even host the game climate-wise (news flash: thanks to improved ice technology, it has been able to for years now), to the idea that the NHL is killing the outdoor-game allure and spectacle (it is), to the possibility of a throwback jersey, like the annual Winter Classic usually does.

I posed the notion to Twitter and got some interesting responses. While it's rumored the Kings will create a jersey that they will wear exclusively for this game, a popular joke (or at least I hope they were joking...) was that the Ducks should bring back the Wild Wing jersey. I've got to admit this guy's logic is actually solid.

@gcducksfan @ackylenicolas The Kings can bring back the Burger King. They could have it around X-Mas and call it an ugly sweater party!

I could happily live my life if this never became a thing again.

Though I admit I would love to see Anaheim bring back the eggplant/teal and the old mask-and-sticks logo. Just for a game. Likewise, NHL rules state you can make a change to your uniform system every three years. Next season the Ducks will be eligible to do so once again. Perfect time to switch our current third jersey into full-time use and introduce a new throwback alternate, yes? [Ed. Note: YESSSSSSSSSSSSS!!!!! -CK]

The Kings' Twitter account was up to its usual snobbery this week. While I do give them credit for being "outside the box" in their approach for a professional organization, there are many times where they just get annoying.

Send in the dancing Lobsters already. RT @buckyhermit The @lakings should hire @amandabynes to be in charge of their Twitter.

This week they tried to gloat about their Stanley Cup for the billionth time, this time in the face of the team they defeated (which is pretty low-class as is, might I add), and I've got to give props to the Devils for standing up and chirping back.

@lakings glad we could give back. We are always willing to help the less fortunate. We have 3 cups tweet us when you do too.

Oh you, silly Kings and how you think one Stanley Cup makes you better than everybody. McKayla Maroney... how impressed is the rest of the NHL?

earlier a kings fan started pointing at his cup ring, & his friend immediately stopped him & said "they have one too, that won't work".

The fact that many Kings fans don't know that the Ducks have a Cup ring and banner already means they either bought their jersey last June after learning what goes on at Staples Center when the Lakers aren't playing, or they have an unparalleled ability to block out traumatic events. I'd try to teach myself the latter to forget they even exist, except they won't shut up about themselves for more than three seconds.

Neither will Eric Cartman.

There's a reason nobody likes him.

Moving away from the Kings for a little while, CBC's Don Cherry is a staple in Canadian television. Beyond his legendary fashion sense, the former coach of the Boston Bruins is in many ways like the Bill O'Reilly of the hockey world: he's loud, opinionated (and unmoving), a blatant nationalist, extremely controversial, has die-hard fans who cling to his every word, and his "Coach's Corner" segment makes a killer drinking game. (Note: I take no responsibility for any deaths from attempting to play this game). He probably also hates the kids and their rap music.

However Cherry also has a Twitter account. And while you'd expect a juggernaut in hockey analysis to be constantly tweeting about his thoughts on the NHL, he's become famous for his anecdotes of life which have little to do with anything at all. He's told stories about everything from why organ donation is close to his heart to being honored to see his name next to the late Stompin' Tom Connors.

This week, Cherry's story centered around a raccoon loose in his neighborhood.

1. I was driving along in our neighbourhood and I see a white van and it’s an animal control guy and he gets out with a raccoon in a cage.

2. He lets the raccoon out and the raccoon runs away. Evidently, he gets pad for removing the raccoon from one neighbourhood to let him find

3. a new home in another. So I stop and say to the guy "hey don’t let that raccoon go in a neighbourhood. Take him to the woods.

4. He’llgo into one of the houses." He pays no attention to what I said but starts yelling "Don Cherry, Don Cherry, I see you on tv all

6. "Don Cherry, Don Cherry, I am getting a camera" He keeps hollering my name . Now a jerk in some Volvo pulls up behind me, stops

7. and starts honking his horn at me.A tanker can get by, but no, he sits there and continues to honk the horn while the animal control

8. guy is taking pictures shouting my name.How did I get myself into this situation? When will I lean to mind my own business?

And he said in a mighty voice...

Moving on, the Ducks had several games this week during which there were a few Twitter gems from some pretty awesome fans.

Meanwhile, Dennis Rodman suddenly feels like his job stability as the "North American athlete to be turned into a deadly weapon of Dear Leader" is threatened somewhat.

Twitter user @BuckyHermit is a great follow for nearly anything to do with the Ducks, but probably my favorite thing above all else are his "facts" about the Ducks that he shares most frequently following Ducks goals (though on rare occasions after other key events). There were a couple great ones this week:

#AnaheimDucksGOOOAAALLL Andrew Cogliano can win a game of chess by saying "Yahtzee!" #fact

I'm pretty sure he beat me in both mini golf and killed me in League of Legends simultaneously as well. And I wasn't even playing mini-golf.

And play the solo from "Sweet Child of Mine" perfectly before doing it too. No seriously... I think he actually CAN do this. It's Teemu. What can't he do? What HASN'T he done?

And finally, the Twitterverse was sent abuzz at a rate I only thought a Luongo trade rumor could do when it was suggested that Pittsburgh Penguins captain and NHL-poster-boy Sidney Crosby might be dating pop-music icon Taylor Swift. My face:

#TorresFace. Seriously. It's a new thing, people. via pbs.twimg.com

Honestly it wouldn't surprise me if she wound up dumping him due to "inability to communicate" while his mouth is wired shut. That or because she can't date someone who isn't taller than her (both are listed as 5'11" tall). Awkward.

Sidney Crosby's Ego quickly stepped in and quelled those rumors however.

Taylor Swift and I are NOT dating, I bought her a coffee once and that crazy bitch showed up to my house in a wedding dress.

You have to admit that breakup album would be one for the history books. I'd buy it and I don't even like Taylor Swift. (Okay fine... I'd torrent it.) Just wait for the goat versions.

That's all for this week. A reminder: if you come across any great tweets you'd love to see here, send them over to us at @AnaheimCalling!

Ducks To Face Detroit In First Round