Champions At Last (... Of The Pacific) Ducks Blank Oilers 3-0

The Anaheim Ducks finally clinched their second Pacific Division title in franchise history, defeating the Edmonton Oilers for the second time in 24 hours by the score of 3-0.

Share All sharing options for: Champions At Last (... Of The Pacific) Ducks Blank Oilers 3-0

First Period Recap: From the outset the Ducks faced a little adversity as it was announced just prior to game time that Bobby Ryan would be out with an illness, snapping his ironman streak at 220 games. He was replaced on the top line by Matt Beleskey.

The game would start off much like last night's game ended: with the Ducks putting a lot of pressure on the brittle Edmonton defense, and seeing results. How brittle? Ryan Whitney was on their first power play unit, and we all remember his time with Anaheim (not fondly).

The Ducks got the best of the Oilers in the discipline department. Oddly enough it was the captain Shawn Horcoff who was penalized twice, and while the Ducks would look pretty lackluster on their first power play attempt, they wouldn't make the same mistake on their second. The Ducks got a puck to the front of the net where Ryan Getzlaf pushed a rebound past the Edmonton backup Nikolai Khabibulin. 1-0 Ducks just six minutes into the game.

Four minutes later the Ducks would get their second as Emerson Etem found Radek Dvorak with a filthy pass across the top of the crease that fooled not only the Edmonton defensive pair of Justin and Nick Schultz (HA HA!) as well as Khabibulin. Possibly the easiest goal Dvorak has scored all season for his fourth goal in eight games with Anaheim and the Ducks went up two. (During the second intermission Ahlers would call Dvorak "Oiler Kryptonite.")

Etem continued his whale of a first period later on when his speed made Ryan Whitney look like a pylon (surprise, surprise) and went in alone on Khabibulin on a shorthanded breakaway, only to miss the net wide to the left. (Whitney wearing Pylon/Edmonton-defenseman Orange is extremely appropriate.) 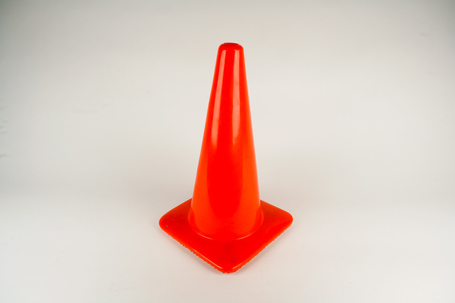 Ryan Whitney in action. via www.rmssupply.com

The Ducks would get into a little bit of penalty trouble late in the period as Francois Beauchemin was sent off late for playing the puck with a broken stick, and the period ended with Nick Bonino bailing out his team with a great block on a Justin Schultz shot. My, oh my how we've missed you, Mr. Bones, sir.

The Ducks outshot the Oil 13-9 and lead the game 2-0 after twenty minutes.

Second Period Recap: The Ducks started the second period shorthanded as they killed off the remainder of Beau's penalty and that prevented the Ducks from really getting their feet set in the first few shifts and likewise the Ducks felt the repercussions. Edmonton got the better of the chances for the first half of the period including a couple big scrambles in which the team made some big shot blocks and Viktor Fasth stood tall.

However the Ducks did what Hazy likes to describe as "Bending, but not breaking." Despite the pressure the Oil mounted on the Anaheim zone, the Ducks held their opponents at bay.

It would take about 12 minutes for the Ducks to finally get their first sustained pressure in the Oilers end, and chances from Getzlaf, Perry, Etem, and Beleskey would all be just barely denied. Emerson Etem continued his excellent game by splitting the Edmonton defense only to be denied by the veteran Edmonton goaltender.

As if we needed any extra reason to love Emerson Etem, he played with fire tonight, and had a pretty rough edge when he got into the vicinity of Justin Schultz. Several times Etem would put a little bit of extra contact on the backstabbing little traitor. Schultz didn't seem to like it one bit but did nothing more than play through it.

Daniel Winnik also went on a two-on-one with Andrew Cogliano, and while he was clearly at the end of his shift, he made the decision to pass through a clearly blocked passing lane and the Ducks didn't even manage a shot. Someone needs to tell this team to SHOOT on these chances.

The period would end with a late Ben Lovejoy penalty for standing in Ryan Smyth's way, and Bonino made another big block on Justin Schultz with time expiring.

Overall the Ducks looked a little flatter but they definitely showed a huge improvement to their defensive game in the second period. The score remained 2-0, but the Oil outshot the Ducks 7-5, bringing the game total to 18-16 Ducks.

Third Period Recap: The Ducks started the period by easily killing off the remainder of Lovejoy's penalty and the tone was set for the rest of the period. The dominance the Ducks exhibited in the first period was back and, and then some. Almost immediately after Lovejoy left the penalty box, the Ducks went right back to pressuring the Edmonton defense and forcing turnovers. And boy did they ever get their way.

Just under four minutes in the, Ducks established zone pressure following an Edmonton turnover and get the puck back to Sami Vatanen who ripped a slapshot past Khabibulin for his second career goal.

It was a microcosm of the Oilers' season this year; Vatanen actually fanned on his first shot, but the fluttering puck bounced off Sam Gagne's skate and back to Sami who made no mistake the second time.

The rest of the period consisted primarily of the Ducks generating chances as Edmonton just couldn't make sense of the Anaheim forecheck.

The Oil will be a great team someday. However their core is still a bunch of kids who are still age-eligible to play junior hockey.

For tonight, the Edmonton goaltender was called upon to bail the team out and he did numerous times, particularly in the third period.

Teemu Selanne had a series of three golden chances in the span of a few seconds, all denied by Khabibulin. Andrew Cogliano had a breakaway as well as several great wide-open front-of-the-net chances turned away.

The Oilers' best and only real strong chance of the period came with Sam Gagne found Jordan Eberle wide open in the Anaheim slot and Fasth came up with a killer save to preserve the shutout.

Time ticked down with the Ducks shooting often and Edmonton and its fans getting more and more frustrated.

Final score: 3-0 Ducks, with the shots in the third finishing 10-8 in favor of Anaheim, creating a game total of 28-24 for the good guys. 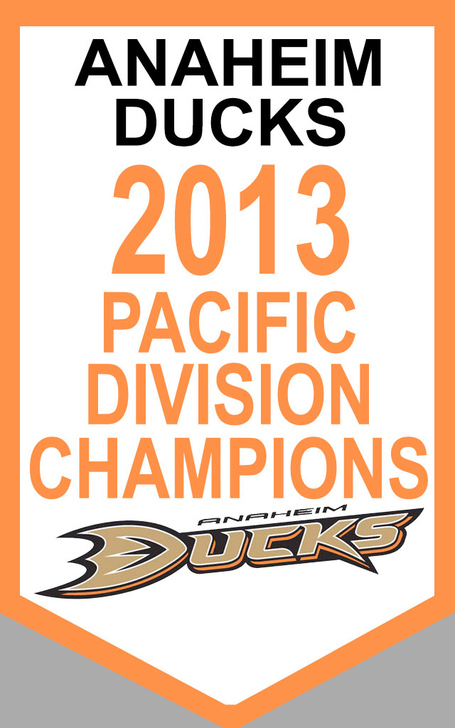 The Good: This was nothing short of a confidence booster for the Anaheim Ducks. They imposed their will, they got their way, and they dominated the Oilers, which they should have done on paper. The team appears to have their swagger back. They pressured and forechecked hard, and generated turnovers. Defensively they blocked shots, threw hits, and kept the Oilers off the scoresheet. Viktor Fasth pitched a shutout. Oh, and the team officially clinched the Pacific Division and second seed in the West, regardless of the outcome of any of the remainder of the regular season.

The Bad: In a previous article, I got on the Ducks case for not being very creative with their offense and trying too hard to pass the puck to a covered man in the slot. Despite putting up three goals with a slew of additional chances, the Ducks still tried these passes a lot, and still passed up on several golden shot chances in favor of passes which then failed. Notably, the Cogliano-Winnik 2-on-1.

The Ugly: The Oilers defense. Man and I thought the Ducks had issues taking care of the puck and keeping possession. Then again what more can you expect from a core initially built around Ryan Whitney.

3rd MVD: Emerson Etem was an absolute force tonight. He didn't score but he made a beautiful pass to Dvorak for the Ducks second goal. Not only does he have extremely skilled hands, but Etem showed his tough, gritty side as well. Etem frequently crossed paths with Justin Schultz, and every time he did Etem didn't shy away from throwing the body. Schultz didn't seem to respond well to that.
2nd MVD: Radek Dvorak continues to impress me. Not only did he score his fourth goal in eight games with the Ducks since we signed him, but he once again made a strong case that he should be included in the lineup regularly. His chemistry with David Steckel looked spectacular tonight, and is the beginnings of a solid, experienced fourth-line.
1st MVD: Sami Vatanen is doing everything in his power to convince the Ducks' management staff that he deserves a full-time roster spot next season, and right now I'd say he deserves it. Vatanen is showing a lot of honey-badger-like elements similar to that of Lubomir Visnovsky; he's small (5'10") but plays bigger than he is, doesn't shy away from contact, is a fantastic skater, and has the mentality of "shoot first, ask questions later" which has been missing from the Ducks defense lately. Likewise I think we finally have someone who can rival Beleskey for best flow on the Anaheim roster. I hope he stays on the Anaheim roster for many games to come.

1st Icehole: Justin Schultz can wallow in his choice. Not only was he virtually invisible tonight, the few times he stepped up were negated by Nick Bonino blocks and Emerson Etem hits. He finished the night a team-worst minus-2 and has shown signs of wear despite playing this shortened season (though yes, he did play in the AHL before). Mr. Schultz, enjoy your long summer, the first of many, and I hope you suffer watching the team you screwed over continue into the playoffs, d-bag.

Ducks To Face Detroit In First Round