Best of Twitter: The 2013 Trade Deadline and Destroying Dallas Edition

I love Twitter, don't you? Some of the best content on Twitter during the hours leading up to the trade deadline, and the Ducks victory over the Dallas Stars on Social Media night in Anaheim.

Initially I hated the idea of it. I mean come on what purpose does a social networking site that limits you to essentially 140-character "status updates" and has none of the personalization options of Facebook serve? It's like the Snapchat of social networks: only really does one super-pointless thing well (and hey at least Snapchat gives you a chance for a... surprise). Well it turns out Twitter actually does a lot.

I've learned one thing about it though: that 99.999% of the time anything tweeted is either going to be mind-numbingly stupid, utterly pointless, or funny. Twitter is a gold-mine of entertainment, whether it be news, jokes, complete overreactions, or other ridiculous shenanigans.

For the record, I firmly believe hockey fans own Twitter and simply allow other people to use it in their mercy. You want proof? Go back to the lockout and look up the hashtag "#PodiumWatch." Or how much it exploded when Roberto Luongo got called off the ice early this past Wendesday, reigniting the long-standing rumors of a trade to the Toronto Maple Leafs.

So thus, I've decided to start a new weekly column entitled "The Best of Twitter." Every week I'll be taking some of the best tweets I've come across from the hockey world and bring them to you in hopes of bringing a smile to your face. Some people are legitimately funny and I feel like I should share the wealth with everybody.

So keep an eye out. If I catch wind of your witticisms you just might find yourself here one day.

The NHL Trade Deadline was this past Wednesday and saw the shuffling of rosters as 26 deals went down in the first three days of April. However the day certainly started off slow. I woke up at around 10:30am (1 ½ hrs before the deadline) and I think two deals had been reported. Needless to say people started getting a little restless, so they turned to Twitter to vent... through trade jokes.

TSN's Gord Miller was apparently bored and decided to quip into the latenight TV scene. Brace yourselves: UNPOPULAR OPINION ALERT! I'm actually pretty sad about this because I actually like Jay Leno *starts dodging rocks being thrown at him*. [Ed. Note: I wholeheartedly disagree with Kyle. Fallon Fans Forever! - JN]

Sources reporting that I finally had a cup of coffee.

Those same sources also later confirmed that lunch will consist of sandwiches and plenty of people choking on them; The Sharks because it's getting too close to playoff time, every reporter in Vancouver because Roberto Luongo got called off the ice early in what turned out to be the biggest troll of deadline day, and then everybody else because MARIAN GABORIK WENT WHERE?! (Yes... he seriously went to the Blue Jackets.)

Speaking of Roberto Luongo... something tells me he got a little bored. Likewise... someone also showed him that Emojis are a thing. The result was possibly one of the funniest fiascos of overreaction I've seen in a long time.

Was Lu sending out some sort of cryptic message about being traded that only the aliens of Omicron-Persei 8 can interpret?!

WHAT DOES IT MEAN??!!?1 OMG GUISE IS THIS CODE FOR A TRADE CALL?!?! LU TO TORONTO FINALLY!

(Note: while it's not confirmed that @strombone1 is actually the Vancouver Canucks goaltender himself, it's widely believed that it is.)

I saw this image being passed around the Twitterverse for a few hours and I thought it was pretty funny.

Ryane Clowe to the Rangers: twitter.com/hockeymemes/st...

Perhaps what's even funnier is that Clowe scored his first two goals of the season in his first game with the New York Rangers later that night.

Another good one that's still being passed around is Reddit's new, convenient diagram of a hockey rink detailing particular areas that have become extremely important to the game in the last year or so. (Click on the image to view it full-sized) 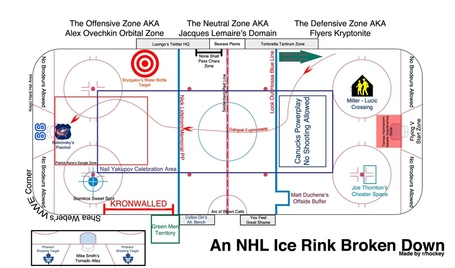 Tickets in Shea Weber's WWE Corner at Bridgestone Arena now come with a 75% chance of Henrik Zetterberg landing in your lap unconscious!

Blue Jackets' backup Steve Mason got moved to Philadelphia... which you may remember is where Columbus' goalie Sergei Bobrovsky played last season.

Steve Mason to the Flyers? Even Sidney Crosby is staring at that trade with his mouth open. #TradeCentre

If you've been living under a rock... it's funny cause Crosby's mouth is currently wired shut, leaving his ability to say absolutely nothing even remotely interesting in interviews completely intact.

Sidenote: Sean McIndoe (aka @DownGoesBrown) is a Leafs fan but is easily one of the funniest hockey accounts on Twitter. The guy is seriously a genius. He's a Toronto Maple Leafs fan but I'd recommend everybody follow him.

Parody accounts are another one of my favorite things about Twitter. There's just something about reading something that that person never would actually say... but totally would say if they had absolutely no sense of decency. @DrunkToews is one of my favorites. As is @SidneyCrosbyEgo.

Not Dany Heatley had this to say about Wade Redden's move to Boston.

yeah, dinosaur Wade Redden to Boston too? I thought Jagr was bad but jesus christ that locker room is turning into a fuckin retirement home

I mean I know their average age with Jaromir Jagr in the lineup is now 187 but come on that's borderline rude... they prefer the term "Advanced Living Community."

@CondescendTorts is a spoof of Rangers head coach John Tortorella, who has a notoriously short temper with the media.

I wanted so badly for this one to be real.

@RealBruceBoudreau is (shockingly) not really Coach Bruce (or is it...?). But nonetheless his profanity and food-obsessed account is usually good for a laugh or two. Perhaps his funniest tweet that I've seen yet though came after news that the Ducks dealt away Jeff Deslauriers (thank God I won't have to spell that anymore).

"Coach" Bruce apparently agrees with me.

And finally later that night the Ducks dismantled the Dallas Stars 5-2 at Honda Center. Appropriately enough... it was social media night. The hashtags "#DucksSocial" and "#AnaheimDucksGOOOAAALLL" were both trending at one point in the night, there was a flashmob, and Ducks fans were given the opportunity to vote via Twitter for who they would like to see interviewed at the first intermission.

I think the Ducks momentarily forgot that this is the internet and tomfoolery will always ensue. Answers such as Emma Watson, Hayden Panettiere, Jennifer Lawrence, Your Mom, and the #phooey king himself Steve Takayasu (@fujigoku23) were brought up as candidates in addition to nearly every player on the roster.

This is why you shouldn't ask Twitter to vote on serious things. #DucksSocial

Personally I wouldn't have minded Emma Watson one bit. *swoon*

PS, if you ever really want a good laugh, keep an eye out for Steve's tweets during a game. He's a very outspoken Kings fan who inadvertently single-handedly started the #phooey trend which has become the biggest inside joke of Ducks fans on Twitter this season.

In the third period Ryan Getzlaf would fall down awkwardly and appear to be injured, only to come back out on the ice and bury a beautiful backhand goal past Kari Lehtonen. It was some serious Paul Kariya business... only not nearly as dramatic. Almost immediately after scoring, Getzlaf went back to the locker room and didn't return for the rest of the game.

Pretty much what happened. And said mic-dropping made him the hero of the night instantaneously; he was awarded both the first star of the game and my personal award for most badass moment of the year (or at least tying himself with Cogs' toothless effort vs. Chicago).

Later with the clock ticking down, the Ducks up 4-2, and the Dallas net empty, Stars TV analyst Daryl Reaugh tried desperately to defend the game the Stars were playing as "Good," "A strong effort," and even saying the Stars were "Making the Ducks work for it," even though there was a cornucopia of evidence to the contrary. Less than three seconds later Andrew Cogliano skipped a puck into the gaping goal to cap off a pretty forgettable night for the Stars and highlight just how much of a homer Reaugh can be.

"They're making the Ducks work for this thing." ???? How many unicorns shitting rainbows do these guys see on the ice?

Probably about 20 less than Pierre McGuire sees when Sidney Crosby is anywhere within 50 miles of him.

So I hope you enjoyed this first edition of The Best of Twitter! Trust me... I'll get better at it.

If you have a Twitter shoot me a follow at @ACKyleNicolas for more Twitter gems that weren't included here. If you don't have a Twitter yet... what the hell? Get on that and join the fun!