Welcome to the start of a new summer series where we take a look at some of the big debates facing the Ducks, the NHL, and the sport of hockey as a whole. Each post will feature a hot-button issue that many people in these various communities are divided on and I encourage debate so long as it’s civil and controlled. 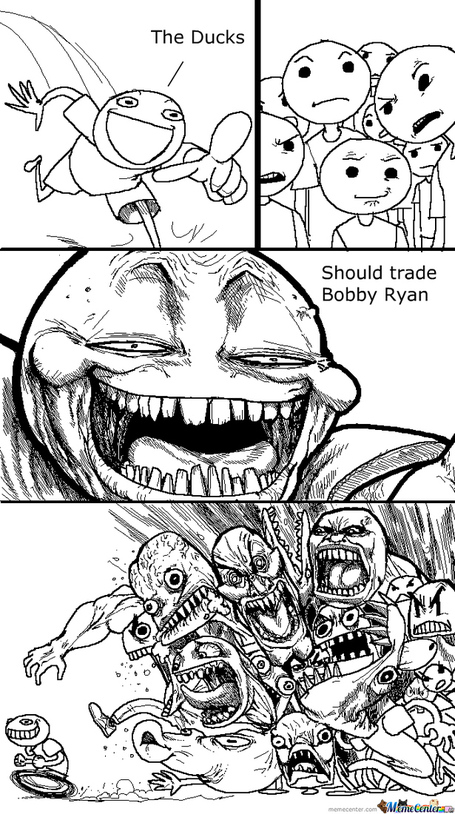 Ah yes, the now-annual phenomenon I shall henceforth refer to as "The Bobby Ryan Hullabaloo."

I swear it's about as regular as the migration of the whales to warmer waters or Kanye West's douche antics: every year as the season ends the NHL media in 29 markets start creating a huge ruckus about Anaheim star Bobby Ryan and how, for one reason or another, he's on his way out of Anaheim and over to their team, most of it completely baseless.

How do these rumors start? I'm willing to bet most of the time it's completely made up in the imagination of some blogger somewhere who claims to know that his team's GM spoke to Bob Murray about the possibility of trading Bobby Ryan and from there it becomes the internet playing telephone until it completely blows out of proportion.

First let me get this off my chest because it's so laughably stupid it just pisses me off now: just because Bob Murray listened to the GM on the other end of the phone line (which who's to say that call was even made) doesn't mean he didn't laugh his ass off and hang up the moment he heard their potential terms.

Every player has their price. There's no harm in Bob Murray listening to a trade proposal. Hell if the Chicago Blackhawks were to offer us Patrick Kane, Johnathan Toews, Patrick Sharp, and their first-rounder for the next nine years then you're damn right Bobby Ryan's on his way to the windy city.

But for Tyler Bozak and a third? Hold on one second....

Whew okay. I can't believe that was actually rumored to be true.

My point is this: just because Bob Murray entertained the notion of dealing Bobby doesn't mean he actually considered it. So far just about all the deals I've heard on the table for our stud Right Winger have ranged from meh to bad to laughably bad to... well you saw my reaction to the Bozak deal.

Bobby Ryan is under contract in Anaheim for another two full seasons. There is zero urgency to trade him away before we lose him for nothing.

However, let's fast forward those two years and think for a minute. I think it's safe to assume the following things will happen:

(1)Teemu Selanne will have retired.

(2)Most likely Saku Koivu will have as well.

(3)Jonas Hiller will have been dealt in favor of giving Viktor Fasth or Fredrik Anderson the starting job, making room for John Gibson in the organization.

(4)Sheldon Souray and Bryan Allen will either be out of Anaheim or have had their deals restructured.

Who the hell cares that Ryan Getzlaf and Corey Perry signed two massive contracts this year? Thanks to Bob Murray's wizardry with the numbers, the Ducks actually have a pretty good handle on their future financially.

Here's where I pose the question of debate for this article: should the Ducks trade Bobby Ryan?

My opinion: No. They shouldn't.

Let's examine another team who faced a similar problem for a moment: the Tampa Bay Lightning. When Steven Stamkos got his first contract renewal in 2011, both Martin St. Louis and Vincent Lecavalier were in the prime of their respective careers. Lecavalier was making $10 million per season (~$7.73m cap hit) and St. Louis was earning $5 million ($5.625m cap hit). When Stamkos' cap hit shot from $3.725 million to a whopping $7.5 million, did the Lightning immediately have to deal away one of their superstars to afford a team? Absolutely not.

Why not? Because you don't trade away a member of the core of your team. Much like St. Louis, Stamkos, and (until recently) Lecavalier made up the core in Tampa Bay, Bobby Ryan is part of that core in Anaheim. Where else are you going to find a guy who scores around 30 goals annually as well as has the versatility to play both center and wing on any one of the team's three first lines, as well as on either the first or second power play unit?

There's no replacing that kind of an asset with just any old trade. A true superstar like that doesn't come around to a team often and thus you give them everything they want to stick around, even if that includes a shiny hat and a pony.

Not to mention Anaheim is remarkably short on the Right Wing position. Beyond Ryan and Selanne, Anaheim doesn't have anybody who could truly fill that top-line spot (though an argument could be made for Kyle Palmieri). The only gem remaining there would be Rickard Rakell and he's a few years away from being NHL ready full-time.

There are some positives to dealing away our beloved Bobby though. Getting him off the books opens up a lot of space for renewing the contracts of some of our key depth players and young hotshots that are due to come up through the system. Likewise Murray could get an absolutely incredible return for an asset such as Ryan. For starters, Anaheim's startling lack of a second-line-center was made glaringly obvious last season and you can bet that Anaheim would get arguably one of the best for him, if not more. One big asset would leave yes, but in return we'd be able to fill any of the gaps we were missing before.

So my message to other bloggers and NHL media who like to keep perpetuating the rumor that Bobby Ryan is on his way out of Anaheim, bound for your team in exchange for whatever paltry compensation you somehow believe is fair:

You will not defy The Doctor. via 25.media.tumblr.com

I yield the floor to you, my fellow citizens of Anaheim Calling.