What's gonna happen today? Do Jonas and/or Bobby get traded? Will Seth Jones drop to #26?

Happy Draft Day, friends! Again we meet to welcome the Ducks of the future. We'll be here all day updating the site with all Ducks goings-on from New Jersey. For super-comprehensive pre-draft coverage, head over to the team site and then come back to the cool kids here. 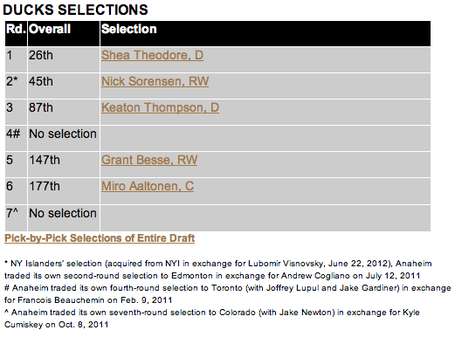 NBCSN will broadcast the draft from 12:00pm PT to 5:00pm PT and then shift to NHL Network from 5:01pm PT to whenever the draft is done. Unlike prior years, the draft will be wrapped up in one day instead of two. Good news, at least I think it's good news, NBCSN and NHL-N US will be using TSN's feed, instead of doing one of their own.

[Ed. Note: As the Ducklings are picked, we're writing a brief dossier for yous guys. Should be up in a bit - JN]