Destiny is Heart, Sacrifice and Passion (reposting from last year)

It's still kind of surreal. I'm not sure where to start. I could recap the game a bit, but I'm not going to for three reasons:

1) There are plenty of box scores and recaps and whatever for that. (Also shhhhh, don't tell anyone, but the entire game is on Youtube. Fair warning, if you get to 1:35:10, you might want some tissues handy.)

2) From a purely objective and neutral standpoint it was not a good game. The game winner was an own goal for Teemu's sake.

3) That's not really what this day is about.

So, I guess I'll just say I'm going to be continuing the tradition that Adam Brady started last year by having a toast to that INCREDIBLE team at 7:35 pm PT. I was one of the lucky 17,372 to be at The Pond that night and the mere fact that the game ended that early is somewhat unbelievable for me. I know it was a 5 o'clock start, but the night just seemed to go on forever, in the best way possible.

Maybe it's because I refused to sit down for the entire third period, or that I stayed in the building for what seemed like hours staring at the Cup sitting on the ice with everyone celebrating around it. Could be that for the entire ride home I looped "We Are The Champions" on my iPod, or that I got home and immediately watched hours upon hours of post game footage, interviews, reactions and celebrations. How about going to class the next day dressed in a Ducks t-shirt, sweatshirt, jersey, hat and a makeshift scarf formed by tying like five fowl towels together? (not safe for bike riding, by the way)

While all that stuff is great, I think the real reason is because it wasn't just about that game, or that night or even that season. It was the culmination of 14 years, not 45, I know... but still literally 2/3 of my life at the time, immersing myself in the team and the game physically, temporally, economically, intellectually (at times) and most of all emotionally to a level that can best be described as unhealthy.

I usually try to avoid using the word "we" when talking about the Ducks. I don't score any of the goals or make any saves or run any practices or anything of the sort, but days like today remind me why it's ok. I'm 2728-years-old and I've been following the Ducks for nearly two full decades now. The only thing I can think of that's been in my life for longer is my immediate family, and they're intertwined as well.

I fell in love with the sport by watching the Mighty Ducks movie on VHS with my sister. I went to my first game (and so many others) with my dad. I was at the Stanley Cup game (and even more others) with my mom. As the celebration died down I went downstairs to share the moment with the woman who would become my wife. And I'm somewhat ashamed to admit how excited I was when I found out that my son would be born actually in the City of Anaheim proper.

I could go on and on, but I've gotten corny enough already, so here's the cherry on top: I may not officially part of this team, but it's part of me. To be clear, I don't say that to be elitist or a hipster that liked the team before it was cool (it's still not, by the way). It doesn't matter if you became a fan in '93, '03, '07 or yesterday. If you feel the pride that your team WON THE STANLEY F***ING CUP, if you feel that sense of community, that you're part of something else, bigger than yourself; it's your cup too.

So why not celebrate by sharing your thoughts and memories here in the comments and having a drink for the people who gave us this day? 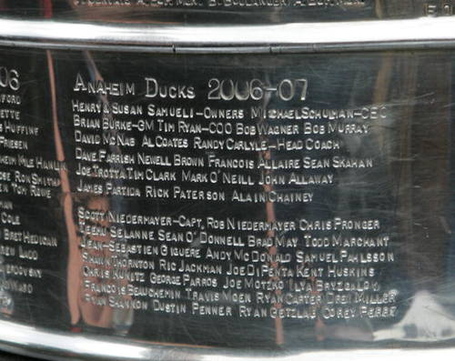 Don't forget all the folks at Disney and Bryan Murray while you're at it... and a little thank you to the New Jersey Devils for winning Game 4 last year two years ago so we don't have to share today with a team who shall not be named.