Sometimes you think Chicago deep dish is perfectly acceptable. The next morning, you remember why New York pizza is the best. This is a metaphor for defense, probably.

Thanks to Josh Howard, the logo for Pizzametrics is set. The basic premise of P-mets is pretty clear: eating pizza is great. It should be the ultimate goal for every man, woman, and child’s life, really. Pizza leads to happiness. In terms of hockey, the diminishment of pizza means wins. I’ll get into this stuff a bit more in the future, but this logo is too good not to finally share. 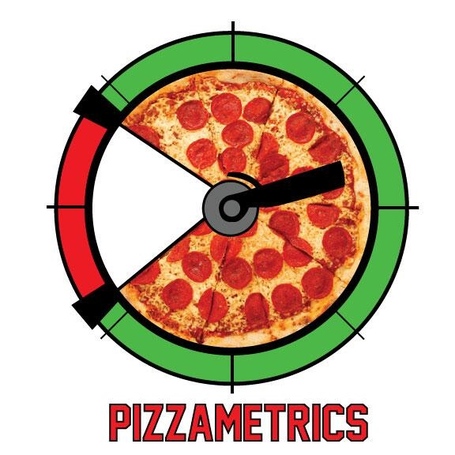 A few weeks back, the CONCACAF Gold Cup game was played between the U.S. and Panama. When I set to get into simplifying advanced stats, I recalled this soccer game immediately, because it is in every way perfect for this discussion.

Some of you have wondered, so I’ll touch on it: I’m using soccer examples because the sport is massive. A lot more of us played it at some point or another, unlike hockey, which many of us have only watched. Soccer is played the same way everywhere. What happens on the pitch, while boring to some, is pretty easily seen and understood. Hockey and soccer have a lot in common, beyond the obvious stuff they don’t. The basic premise of each is the same though: score goals. This is hard to do in both sports.

Going back to the Gold Cup game, the U.S. won the game one-nil. The possession ratio was about 70%-30% in favor of the U.S. (Well, probably more like 70%-20%-10%, with the last being guys writhing in fake agony on the ground while the ball rested on the pitch, just chilling.)

Take a moment, let that sink in. The U.S. had the ball 70% of the time during a 90+ minute game, which is something like over 60 minutes! They still only scored one goal.

This is the lesson of possession in hockey. While possessing the puck 70% of the game is likely only going to be possible against the Toronto Maple Leafs, having positive possession in any capacity isn’t a guarantee for scoring. Like I mentioned before, it just makes it easier.

In that soccer game, Panama relied on a primarily defensive strategy and a sort of counterattacking breakout once they did get the ball. (Sound familiar, guys?) Obviously, by virtue of not scoring, they sucked at it. But holding the U.S. to only one goal was a big success defensively, when you think about it.

Still, they lost the game. That’s all that really matters.

The Anaheim Ducks weren’t a pretty possession team last year. The team had success despite that, and it was born from unpredictable "puck luck" and some quality goaltending by our two ‘minders. It’s possible the team can succeed using the same system, but like I alluded to in the last post, it’s much harder to do and isn’t efficient.

See, you can’t teach something that’s inherently just "chance" – it’s random. (This is what makes the "shot quality" argument so interesting. I’ll get into that in a forthcoming post, in fact.) But luck, by definition, isn’t reliable; it’s a gamble.

The Ducks gambled and won last season. The odds stay the same in the future, and the team may not win those next gambles, because that’s how chance works. However, if the team learns how to gamble smarter – basically, a metaphor for playing a better possessive game – it ups the chances of winning the bet. Blackjack and Craps players can back this up. Learning smarter gambling is a coachable thing, whereas Bruce Boudreau telling the guys to repeatedly "go out there and get incredibly lucky on fewer shots" isn’t.

Smarter gambling = better possession game, and the beginning of good possession starts on defense. That’s why I dropped the Gold Cup game in as an example above, beyond its relevant possession numbers. Panama’s defense was successful at defending but not so much at moving the ball, which is why they lost despite being so good defensively.

Under the previous coaching regime in the years following the Cup win (meaning, post-Scott Niedermayer and Chris Pronger being stupidly traded to the Flyers for some peanuts and a hip injury), the ideal defenseman was a big guy. His skating ability could be marginal so long as he was big. Metrics like "hitting," "clearing the front of the net," and "having a big shot" were pretty important in rating him. And as a bonus, if this guy could pass the puck a little, well he must be the next Chris Pronger, right?

Look at the people we paraded through our corps under Carlyle, using his "metrics." They weren’t good, by and large, or spent too much time injured to do much consistent good. That left our goaltending exposed. That kept us from winning reliably. That embarrassed us as a fanbase, because our team became Tampa Bay and Carolina – one-and-dones, "fluke" Cup winners. I know that irks a lot of you.

Why couldn’t our coach pull our GM into getting good defensemen? Well, look at Carlyle’s metrics. Look, hitting isn’t good. The more hits a team has, the more they are chasing the puck, since you can’t hit when you have it. So the more hits you see, chances are the fewer minutes you spent with the puck, doing things like shooting it. That decreases scoring chances and actually increases them the other way.

Most people forget: the original purpose of hitting in the sport was to remove the man from the puck – a very direct measure to take away possession. Now, hitting has become "finishing checks," which is after the puck is gone – ergo, not a positive expenditure of energy in regaining possession at all. I love hitting in hockey, but I hated how Carlyle "preached" it so very much, particularly as it pertained to his lineup decisions.

Clearing out the net is another misleading bit thrown about. It is a pretty keen skill for like, a very low percentage of situations. But preventing a guy from setting up in front is more important and has never relied on size – that’s actual defense. I’d rather have a guy who can disrupt an offense and prevent it from setting up than a guy reacting to an offense imposing its will. Now on the penalty kill, there’s an extra skater, so someone’s probably getting into the tendy’s grill. A big body in that instance is nice. But not that much of the game is spent on the PK.

Having a big shot is about the most overrated "skill" a defenseman can have. Like I wrote about in post three, defensemen should be prized for puck movement and limiting offense. Providing offense is a bonus with those players. Guys like Pronger or Zdeno Chara aren’t prized for the big shot, even though they have it. They’re prized for wrecking your ish defensively. It so happens that guys who do defend and move the puck well tend to get points, whether tucks or apples. I mean, look no further than Sheldon Souray. The dude has a huge shot. But he was benched in the playoffs because without a fully healthy Francois Beauchemin to carry him, he sucked on defense and moving the puck.

I’ll add one here: blocked shots. This isn’t really one of Carlyle’s flaws, but I’m going to drop it in here as a bad thing to finish up the convo anyway. Tracking blocked shots as a means of judging a guy’s defensive worth is bad. Like hitting, a blocked shot happens when you don’t have the puck. Not having the puck means not scoring. The point of hockey is scoring. It’s inherently an opposite stat to the very point of hockey to teach and track. Blocking a shot as needed is good defense – but it isn’t something that should happen all the time, because all teams employ a guy with more pads to stop basic shots. Let the goaltender block shots, the defense’s job is to limit them happening. So making a routine or system of blocking shots means ceding possession to the opposite team, uncontested, in favor of some kind of "hope and pray it bounces the right way" philosophy.

"Ok," you say, "so those metrics are pretty bad in these terms, but Carlyle’s in Toronto now, right? Who cares." The thing is, Murray built the defense based on his coach’s wants. Good GMs do that. (I can’t believe I just wrote those two sentences consecutively about the Boob.) But given this setup, if your coach isn’t the best judge of players, the GM will build a bad team. That happened here with the defense, and while we have Boudreau now, we’re dealing with the aftermath of a guy who thinks concussions are because of helmets.

And that’s why most of the hockey media thought the Ducks would be a bubble team for a couple seasons until Boudreau’s style and system took hold and new players joined the team. The bad has to be flushed or re-taught, the good has to grow. So next time, I’ll touch on some key differences in Carlyle’s system against Boudreau’s system, and why I think it bodes well for the Ducks in the future – even if we see some drop-off in success next season.