Fancy Stats Simplified: I Am Possessed

Share All sharing options for: Fancy Stats Simplified: I Am Possessed

What is possession, in a broad sense?

Forget all the fancy names and measurements and the like. Possession is having the puck. In fact, this is the hockey chain of command:

The inverse of this is not having possession, which sucks. But really, not having it is just one extra step before having it:

Let me explain something about the puck. The ultimate philosophical and moral point of the puck's hard rubbery existence is to be inside a net - to score. This is not the only rubber product with the same aim, but it is the most noble. The puck wants to be scored with. To do so, you have to use it accordingly. A lot. Doing so makes you a winner.

Possessing the puck is like a game unto itself. When I first learned puck handling, I learned about "the box." It is probably called different things to different people, but screw them. This is my post, I learned it this way. I have all the pizzas here. (This information is, like, 20 years old too, so you know it is totally still in play.)

The box is the space in front of and "under" you, slightly offset to your forehand side, where you control the puck. If you are "over" the puck in the box, in your space, you have a good handle on things. Wait, I will MS Paint this up, it will be great. 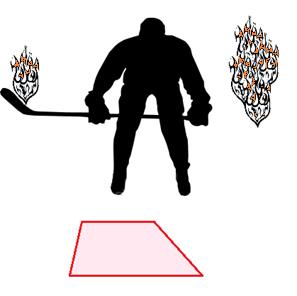 Nobody should take that man's puck from his pink box with weird flames circling around him. This is similar to soccer too. When you possess the ball, it is in your circle - your ranged sphere, if you will. When you move, you kick it to the edge of that sphere and run to catch it, which is called dribbling. But the key is, you maintain control of the ball within your space. As your skill improves, your range increases into what we see professionally, which is beautiful athletics.

The same applies to hockey and the basics of puck handling and possession. With the puck in your box, in your space, you own it, and owning the puck is so very possessive. It is wonderful. Aside: this is why heavy "safe systems" coaches hate danglers, a la the Carlyle-Ryan scenario. Bobby Ryan is like, one million percent skill, but his hockey sense is still growing. Carlyle wanted safe plays, "smart plays," or guys not going through people trying to dangle around them, one on two. Statistically speaking, even Sidney Crosby loses out on uneven odds like that most times, but guys like him also pick their spots so well that we tend to overlook the basic fundamentals on display when it does not happen. Those fundamentals include the concept of owning the space and the puck, and probably like two homes, 20 Ferraris, and many pizzas. So jealous.

In fact, in continuing on this aside, on Ducks telecasts we often hear about how Corey Perry likes to play with the puck away from him, and how odd that is comparatively. And he does, and it is odd, and my theory is because his skating outright sucks. But Perry has incredibly strong wrists and utilizes his balance so well that, instead of tucking the puck under (or in his wheelhouse, or whatever these cats say nowadays) and booking along like most players, he pushes it out and makes opponents push him off the puck. He knows he cannot burn them. He also does not have the quickest hands, so he rarely turns anyone inside-out. His hands are just strong. (This is why he gets slashed all the time.) Players like Perry are an anomaly to the basic possession fundamentals discussion, I think.

So Matt Beleskey, in the picture up top, has the puck in his "box" while in stride. Unless someone approaches his front or side with speed and good technique, he will not lose this puck, because stickhandling from this position is the easiest. He is displaying good possession here, except the puck is rolling, but I did not find a picture I liked better, so take it or leave it, suckers.

From his position here, Beleskey can use the puck in the best manner possible - putting the puck on net. (Well, for him, it means shooting it wide of the goal.)

But this goes back to my previous post. Possessing the puck means you can use it to score more, which is essentially what all those fancy stats tell you is happening (or not happening) during a game. The more you use the rubber, the better chances you have of scoring - double entendre, ho! But most importantly, the more you use the puck, the less chance the opponent has to use the puck. And time management is pretty key in its own right.

Next up will be going back to my "defense sucks" claim from post one, and tying it in with this possession post. Like, the circle of life stuff here. (Pizzas are circular too.)