Thankfully this was still the preseason, because it was one crap game of hockey.

Share All sharing options for: Ducks Finish Preseason with 6-5 Loss to San Jose

First Period Recap: It didn't start so bad, as Daniel Winnik opened the scoring just under five minutes in by tipping a Mark Fistric point shot down and past Anti Niemi.

Patrick Marleau tied it up on a rebound off of the end boards, Detroit style.  Why doesn't that ever work in our favor?  But it didn't last long as Andrew Cogliano (who seemed like the only Duck skating at full speed for most of the game) scored the highlight reel goal above, spin-o-rama falling to the ice swinging the puck toward the net and somehow past Niemi (it wasn't just the Ducks who were off their game tonight).  At this point, the Ducks weren't playing particularly well, but had a 2-1 lead with only three shots on goal.  Then it went down hill fast.

Joe Pavelski found himself a wide open lane to the net from the faceoff dot and scored on a sweet deke around a frozen Jonas Hiller to tie the game at two.  About three and a half minutes later, Ben Lovejoy boarded Logan Couture pretty badly.  I'll stop short of saying Couture turned into the check, but he stopped for the puck and as the good reverend finished his check he bounced Couture's face right off the top of the dasher.  Couture stayed down for a minute or two, but returned to the game, seemingly no worse for wear.

Jason Demers made the Ducks pay on the subsequent power play, giving San Jose a 3-2 lead to finish the period.

Second Period Recap: I can't think of a single good thing to say about the second period.  it started with a John McCarthy goal, a really nice backhand shot off of a rebound left by Hiller, then things continued to fall apart.  Matt Beleskey, took a roughing penalty for trying to start a fight and failing.  About halfway through the kill Ryan Getzlaf took a boarding penalty (not as bad as Lovjoy's but clear as day).

It only took 16 seconds for Dan Boyle to make it 5-2 and the smile on his face as he went past the bench for high fives, was enough to make you want to slap him.

On the next shift Beleskey got the fight he was looking for, with Freddie Hamilton.  The fight was uneventful, but Bels ripped Hamilton's helmet off missed a a few hay makers and landed on top so, people got excited.  Beleskey ended up getting an extra two for interference that the Ducks killed off.

Roughly halfway through the period I checked the scoreboard and the Ducks were being outshot 28-7; an excellent indication of how the game was going.

More chippiness ended the period with Patrick Maroon fighting Tyler Kennedy (another boring fight that Maroon won by default) and Andrew Desjardins roughing on Lovejoy, and the third period seemed like a formality.

Third Period Recap: The Ducks made it interesting with Kyle Palmieri swiping the puck at the blueline almost seven minutes into the third and sniping one over Niemi's shoulder.  On the next shift Dustin Penner scored a fluky goal that popped up in the air, deflected off of something and sort of rolled in over Niemi's shoulder.  All of a sudden it was a game again.

...BUT Devante Smith-Pelly took an interference penalty right away and again Dan Boyle wasted no time putting it past Hiller to kill the Ducks' momentum.

With about three minutes left, the puck dropped right on Saku Koivu's stick, just below the faceoff dot and he was able to shoot it right through Niemi to bring the Ducks within one again.  There was a flurry of activity with Hiller pulled, including a golden opportunity for Getzlaf on a cross crease pass, but he couldn't get the handle and the Ducks' preseason ended with a 6-5 loss at the hands of the Sharks.

Note:  The radio broadcast mentioned that Emerson Etem is unlikely to start the regular season after sustaining a lower body injury in last Friday's game against the Sharks.  He's still listed as day-to-day, but the team is playing it's cards close to the chest.  It should also be noted that Raffi Torres, who collided with Etem, had to have ACL surgery this week as a result.

The Good: For me the game peaked way too soon, because NOTHING in any preseason game could possibly top meeting David and Daniel Santa Maria, a father and son with matching Wild Wing Ice Breaker jerseys. 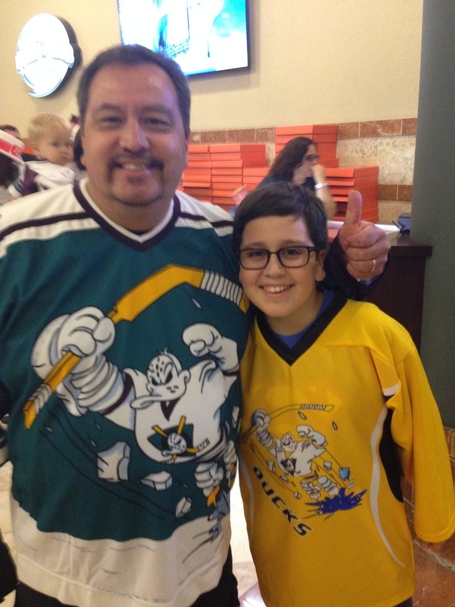 That's just not something you see every day.  David (the father) he found Daniel's jersey on eBay for $20 and just couldn't pass it up.  The jersey is number eight and has "Hockey 101" under the number.  I'm still flabbergasted that a replica of that jersey exists.  Stick tap to my wife Amy for spotting Daniel's jersey on the big screen during warm-ups and in the concourse later on.

The Bad: Defense.  All game long there were Sharks players away from the puck, completely wide open in dangerous scoring areas, and they almost always ended up with it on their sticks.  It was simply far to easy for the Sharks to move the puck and find open ice in the offensive zone.

The Ugly: Puck possession, or lack thereof.  You don't need any advanced stats to tell you that the Ducks just couldn't get a hold of the puck for the first 40 minutes.  They were lucky to be as close as they were.

3rd Icehole: Cam Fowler was caught playing at the end of his stick on multiple occasions and losing his man on the back side of the play.  He was not alone by any means, but it stood out enough for him to end up on this list.

2nd Icehole: Saku Koivu, even though he ended up with a goal and an assist, he was on the wrong end of far too many ugly turnovers for my liking.

1st Icehole: Jonas Hiller didn't get much help, but he was swimming around his crease all night, sliding away from shots as they whizzed by him, falling backwards, running into his own players.  It was not pretty to look at, and even less effective.  If it wasn't for Sharks missing a few wide open nets, it would have been even worse.