We passed the midway point of the season a bit ago, so I thought: why not remind people why I made up a fake ratings system for the Ducks? Why not. Indeed.

I'm dropping in shot attempts charts again. Since this is like my surprise mid-season pizza manifesto, I'll remind you: the higher the line, the closer to God. (And positive possession events.) 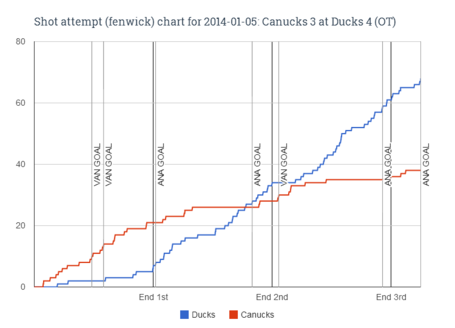 The second period is one of the most dominating periods of hockey any team can ever play. This is good, because that was one of the worst first periods I've seen this team play. Not all slow starts are equal, but this slow start was godawfulbarfy. 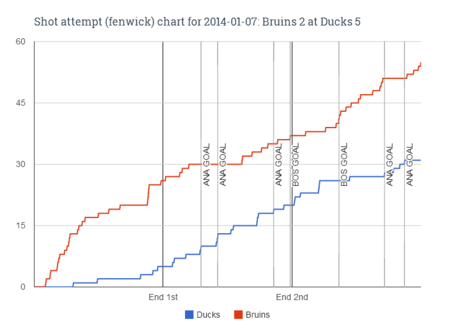 This slow start was more a product of excellent opposition executing a solid strategy and not flat play, for instance. The B's smothered the hell out of the Ducks, coming hard and fast. If you recall from earlier games against Dallas and Calgary this season, one of the weaknesses of our smaller blueline is a very aggressive forechecking game. I have stated this repeatedly, and it has been repeatedly true. Give me all your monies, I will tell you other truths. 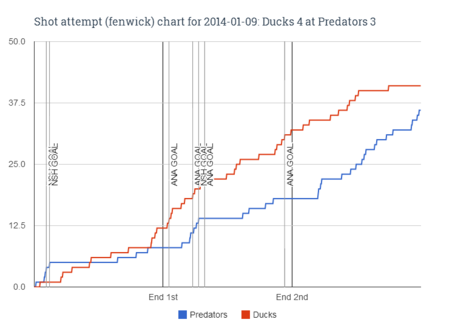 For four minutes, the Predators played an AHL team. Gongshow. Then the Ducks woke up and kicked Nashville's teeth in the rest of the game. Boom. 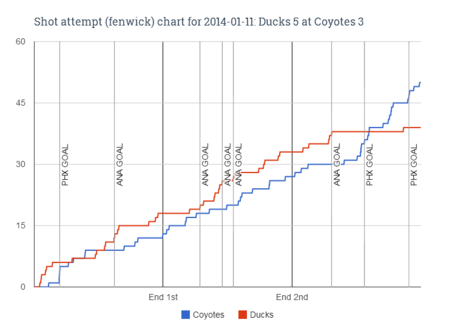 I'm pretty disappointed in this game: there could have been FOUR stupidly bad first periods here, which would've probably prompted a topic for me to discuss - I guess it still might, but I have to really "feel" it first, the same way I have to really "feel" that six slices of four-cheese pizza I just ate before taking myself to the - Wut. Yes.

His numbers are still sound enough, but most of his success is with the Twins. He's been a little softer of late, and Boudreau has asked me to take away one slice so Penner stays at his targeted weight.

Patrick Maroon, LW (4P-Met) - The reason Emerson Etem is playing in the AHL and Maroon is here is because they have virtually identical roles on the big team, and Pat absolutely kills doing it. He's lights out better than Etem in this role of sheltered, limited-minutes depth winger. He drives a lot more play and helps his linemates down low in the offensive zone. His defensive game isn't shit poor either, oh wait can I say that here? Eh.

That's really all I have to say. He hasn't played in every game, so I feel this word count is commiserate to h

The point of Pizzametrics is to add my subjective ratings to the many "advanced statistics" out there without bringing up Real Numbers. Why, my two readers ask? Because regardless of the numbers not being real complex or advanced, not everyone likes fancystats. They just want to watch the games, enjoy the wins, and not hear about how it's impossible for their favorite team to keep winning.

I'm fine with that. There are times I like to enjoy a win regardless of how extraordinarily lucky (or fluky) or ugly the team's game was without thinking too much. But the times between games, when I want to contemplate the finer points of the game, I like looking at what the numbers say. That's still not for everyone, and also: fine.

So I couched all of it in P-Mets - ratings based on delicious pizza, because everyone loves pizza. My subjective nonsense herein doesn't correlate to any specific stat but more of a combination of a few, plus usage, role, and my own limited understanding of things from playing and coaching. It's all in good fun, but it's also my way of identifying the positives and negatives of a long season and sharing them here.

Let me know in the comments if there's an area or topic you'd like me to talk about next week or in the future. I've tried to shed light on various non-obvious things so far as part of this thing, I'd like to continue that. I guess.